Wolverine vs the X-Men, Part Three of Three

We kick Jessica Jones Month off with this issue!

The bullet had the bubonic plague with a side of mouth cancer.  The goal is to overwhelm the healing factor, to make him completely vulnerable.  Storm is not pleased that the guys are here with full intentions to kill Wolverine’s body.  I wonder if these two guys talked about this adventure while they were on X-Force together?  Probably not.

Storm reveals that the lady X-Men are inside of his head, and Doctor Nemesis wants them out, immediately.

In the mindscape, Wolverine isn’t happy that the ladies are there as the stakes are too high for them.  Melita, his girlfriend at the time, slices a demon in a half.  This turns Logan on and they kiss. 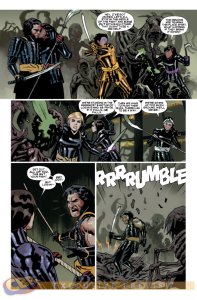 Jubilee wants less kissing and more fighting.  Kitty isn’t happy about the collateral damage the demons are doing to the surroundings.  Which is smart, of the demons, Logan isn’t the target, his walls are as that is where his emotions and traits are located. 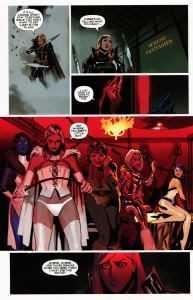 The ladies get separated and the best two pages of the issue occur.  I wish these type of scenes were mandatory whenever characters visit one character’s mind, they should be able to open a few doors and we get to learn more about that character.

Emma finds a door titled, Sexual Fantasies.  We see – Mystique, Emma Frost, Squirrel Girl, Spiral and Jewel.  Jewel, of course, was Jessica Jones’ superhero identity – and this is her sole appearance in the issue.  Squirrel Girl is also an interesting choice.

Emma wants to immediately start killing demons or have them kill her, so that she can forget about what she has seen.

Melita finds a room titled, Hopes and Dreams – it is nice that they are so handily labelled.  Of course, Logan dreams of Jean.  That is not the room his girlfriend should be looking into.

Shadowcat comes across two rooms, Reasons to Hate Myself / Secrets of Weapon X.  Which I’m sure there are some crossover items in those two rooms.  A fun thing, with Kitty’s panel, is the words “Doctor Rot Was Here” and he will be in the upcoming “Rot” storyline of this title that I own three of the four issues (305, 306 and 308) which is still a year away, that’s some great plotting there!

Jubilee sees, X-Men I’ve Had Sex With, which is a pretty handy room to have!  Jubilee comments that the Danger Room was not meant to be used in such a way.

Rogue gets the best room to visit, How I Cheat At Cards.  She always suspected he was cheating.

Wolverine crashed into the floor below and starts fighting a demon.

Logan isn’t doing so well, good thing his buddy, Nightcrawler, also finds himself dead and is able to lend a hand and a tail and swords, even!

Outside.  Hellverine spits hot lava at Storm, knocking her out.  Cyclops has arrived on the island and starts fighting Hellverine.

The ladies are surprised to see Jean Grey, in the White Crown Phoenix costume, arrive.  Emma confirms that this isn’t Jean from Heaven, this is Wolverine’s ideal Jean.  This Jean is capable of shoving the ladies out of Logan’s mind.

Jean tells Logan that he has to let her go.  I’m not exactly sure what that has to do with anything but that’s what she is telling him.

Da Boys are not really holding their own against Hellverine, until he starts vomiting.  It is up to Cyclops to finish this.

Logan is contemplating his next move, as Nightcrawler keeps fighting off demons.  Wolverine sees another door, People I Have To Kill Before I Die, this is all he needs to see so that he can commit to living.

There is a two page house ad for three new number ones.  Moon Knight with Bendis / Maleev, Daredevil with Waid / Rivera / Martin and Punisher with Rucka / Checchetto.  I know Waid’s run is pretty awesome.  Bendis and Maleev had Moon Knight fight Count Nefaria and I’ve heard that Rucka’s Punisher was disappointing.

Cyclops is about to kill Wolverine but he mutters, Jean, and Scott stops himself.

Logan is Wolverine, again.  Kitty couldn’t be happier, look at that smile!

Utopia.  Wolverine is checking on Colossus, who got cut rather deeply.  Cyclops offers Wolverine some beer, which I like how this is the way they put their beefs behind them.

There is an ad for X-Men Giant Size, where the Original Five meet the mutants of Utopia, but this is not referenced in Bendis’ All New X-Men, not is it ever referenced.  They get away with the younger versions with this, as I’m sure they are pulled from after issue eight.  But why the present day folks don’t bring it up?  I’m not sure.

The issue ends with Nightcrawler, still in the mindscape, Patch, James Howlett and a Rambo Wolverine are trying to gather the broken pieces.  We see these doors – Mercy / Compassion / Favorite Lines of Poetry / Best Dirty Jokes that are all broken.

We see the Berserker write, REVENGE, onto a wall and Nightcrawler is not thrilled with this turn of events.  The next issue of this series that I own is 16 and then it is 300 and then the Rot storyline.

The back cover is an ad for the video game tie-in for Thor’s first film.  As far as I know, it still holds the record of fastest price drop.  It started at the traditional (but silly) $59.99 and in two weeks, after negative reviews galore, it dropped to $19.99 and it was still not being sold.