It isn’t build as such but this issue and All New X-Men 40, work as Black Vortex epilogues.

Planet Spartax.  After J’Son was dethroned, and Kitty (single-handedly) saved the citizens of Spartax – the people had a choice on who their new leader should be.  For some reason, probably because they didn’t know how to spell her name, they voted Star Lord to be their president.  The problem, now, is that Quill is nowhere to be found.

Togth, who seems to be the head of the Spartax election council (or some type of committee), elected Quill president, without consulting him.  Another council member, Glogug (who gets name checked early in the issue) is very upset about this.

In some seedy bar – Pryde and Quill are making out, hard.  Shouldn’t Lockheed be part of the Guardians of the Galaxy, now?  Or is he back to being Illyana’s best friend?  People want to know!

Quill would like to marry Pryde, right here.  She is tempted, but not really.  Both of them can’t believe they are going to get married.  Quill hints that she is Kitty-Pryde-soon-to-be-Kitty-Quill, but she shoots that down, she is keeping her name.  She would have to, as she is best known as “Kitty Pryde.”  I don’t help with typing “Kitty Pryde” instead of ‘Shadowcat.’  That is on me.

Pryde tells Quill that she is Jewish, he has a great of “yeah?” as if it doesn’t change anything – and it shouldn’t, except for maybe an additional custom or something with the wedding ceremony.  Kitty states that once her mother finds out that Peter isn’t, Theresa Pryde is going to kill him.  I do like how Bendis keeps trying to build up Mrs. Pryde in the fan’s expectations, even though Kitty and Theresa don’t really keep in touch -that we’ve been told.  Theresa was never into technology and that was a main interest of Kitty’s, so they didn’t really have any common ground.  Kitty being a bit of a daddy’s girl, didn’t help either.  I imagine that is primarily due to writers having story ideas for Carmen.  Theresa really needed her own version of “Kitty Pryde and Wolverine.”

I do feel like there is a missing panel in that bottom row, between the second and third panel.  Like, maybe Quill was meant to add another “yeah?” after her last thing in the second panel.  As her “oh yeah” in the third panel comes out of nowhere.  Maybe it is just me.

I imagine I don’t like referring to her as “Shadowcat” in the same comic as “Star Lord” as Star Lord, is a silly name.  He is simply “Peter Quill” to me as I do enjoy typing “Pryde and Quill.”

Kitty states that Peter is in for a verbal beat down from her mother.

Rocket speaks up, as something is on the television that Star Lord should see.

Rocket reveals that the Guardians knew he was elected President.  Kitty can’t believe someone not running for an office can obtain that office.  That isn’t how it is done on Earth, and it is so funny that the space crew think that the way Earth does it is too complicated.

Here is my question, did they all leave Spartax at the end of Black Vortex Omega and went to another planet?  I guess that makes sense to celebrate at a fun location but wouldn’t the Spartaxians want to celebrate Kitty as she saved the entire planet, on her own?

This is my favorite page of the issue!  Such great pacing by Schiti.

Quill really doesn’t want to be the President of a Planet.  He overthrew his father, J’Son, in a previous storyline so that’s why Spartax wants to reward him with leadership.  If he doesn’t want it, they should be looking towards Pryde.  If Quill doesn’t want it, though, I can see her not wanting to force him into a First Mister of Spartax, role.

For some reason, I like the idea of Kitty not wearing her gloves, in this issue.

The Royal Chaperone Guard, as this must have happened at least once before, arrive to bring Quill to Spartax.  He is only the President Elect, so he can’t boss them around.

Drax is ready to fight for his friend’s right to not be forced into a leadership position.

Quill gets Drax to calm down.  Pryde offers to help them escape, but Quill really doesn’t want to run.

Then we get to the genius part of the issue.  Quill doesn’t want to go alone so he wants to bring his fiancee.  Apparently, that is only an Earth term, as one of the guards recommends Quill pay her off and come along.

These are his Cabinet members.  Pryde wonders what happens if Quill can not turn down the position.  If he can’t, she gets a princess wedding. 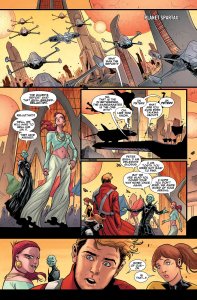 Planet Spartax.  This is where we officially get the two delegate names – Glogug (the green gentleman) and Togth, the pink haired lady.  They have told the news that Quill was returning home (even though he should have just been there). 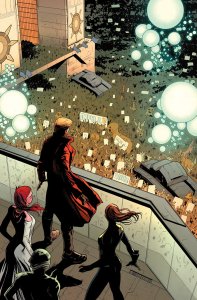 It looks like millions of people have arrived.  In a previous issue, we were informed that Spartax is the size of one and a half Earths.

Quill gets a private meeting with the delegates.  He really doesn’t want to be president.  Togth informs him that he is seen as a hero.  Without the Kree and Skrull empires around, Spartax stands at a special place in history, that they are the leading empire.  They try to sell him on the idea that Quill can implement real change. 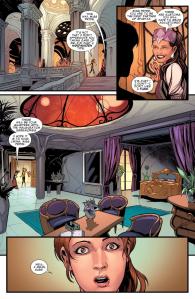 Kitty is being shown to her room, she is already trying to turn it down, as it isn’t really her style to be pampered.  Her official title will be, Official Partner of Spartax, which is pretty nice.  Her room is gigantic.

The other Guardians are also well treated.  Rocket is getting a special bath, he doesn’t like his feet touched.  Groot is in a lovely garden that he can plant himself in.  Drax is “training” the guards.  Flash is taking in the view when a rumble beings to occur.

Back in the meeting, Togth likes the idea of the Guardians being a sort of Galactic Council.  All of Quill’s reasons for not wanting to be President are immature and he is having to deal with that.

The rumbling gets so active that everyone has to take notice of it.

The issue ends with what looks like an Incursion.  Which I guess makes sense, if Earth and the Ultimate Earth are colliding, then the other planets will as well.  As far as I know, and I could be wrong, there is no Ultimate Spartax, so this could not be it.

I can only imagine that I am going to be buying these upcoming issues as Kitty is clearly a member of the team.

Can’t wait to see what issue twenty seven has to offer!

4 comments on “Guardians of the Galaxy Volume Three Issue 26”