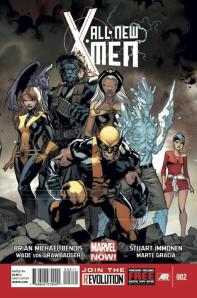 The Jean Grey School for Higher Learning.  Now.  Kitty is outside of Beast’s lab.  He isn’t answering her summons, which he isn’t even listening as he is back in time.

The very first panel shows Kitty outside of the lab, with no one around.  Three panels later, Iceman is right next to her.  Where did he come from?

Kitty enters the lab and looks around.  She is confused by some of the readouts that are displayed.  Iceman knows she is a genius so this is way out of his league.

I like how Beast uses his classic 80s Beast ape man face as the warning screen.

Then.  Beast is trying to convince the Original X-Men to come with him.  Bobby can’t believe that the guy he knows, Scott, can be responsible for any deaths or destruction.

Beast asks Jean to read his mind, so that she knows he is telling the truth.  This is shocking to her, as she didn’t know she could read minds.  She was just a basic telekinesis type at this point.

Warren starts asking why Beast can’t talk to his time era Xavier.  Beast takes a beat and then tells them that Cyclops killed Xavier.  I really like the panel where they hear this with the broken glass effect before their heads.

Scott is just shock by all of this news.

Beast talks to his younger self, trying to convince him of the stakes involved.  He even swears on their mother, which poor Hank doesn’t even know that an alternate timeline version of himself will later masquerade as him and kill his entire living family.  I would leave that out too, if it was me.

Warren wants to know why Beast doesn’t just kill Cyclops, as he killed Xavier.  Beast tells him that he refuses to take anymore lives.

Beast goes outside and has another attack.  The Original Five are in costume now and agree to go to the present, just to investigate the claims.

Once there, they are amazed by the size and appearance of the school.  Jean wants to know why the school is named after her now.

There is a double page house ad for Amazing Spider-Man 700.  Don’t worry, Spider-Man comes back it takes a year and a half, but still.

Wolverine is teaching a class about what to do when fighting a ninja master.  He then gets a whiff of a scent and leaves the room.  Wolverine jumps at the Original Five X-Men, and Jean holds him in the sky and Scott optic blasts him.  Bobby freezes him.

Storm, Kitty and Iceman all come out and are not pleased with what they see.

Then the Two Robert Drakes meet : 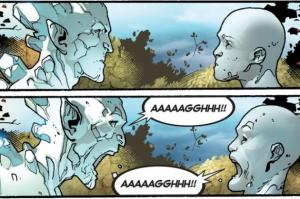 Pretty fun.  Bendis knows, even at the start, to limit Bobby to just two great moments per issue.

Beast has another attack, this one freaks out Hank. 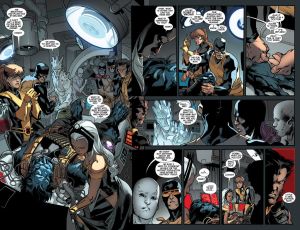 Kitty is the only one, besides Hank, who knows her way around the lab.

Storm tells them that Reed Richards and Tony Stark have messages for them to respond quickly.  She mentions Horizon Labs, which I’m not familiar with.  It is the place that Peter Parker works at that where Doctor Octopus once he is ‘Peter Parker’ excels at.

Iceman looks at the Original X-Men, wanting to know what they were told.  Scott says that he is there to speak to his older self.  Something that even in the present day, hasn’t really happened outside of a few lines.

Wolverine takes the ‘little X-Men’ to the study.  Jean makes him fall asleep and it looks just like how our son, Walker Dennis, sleeps now : 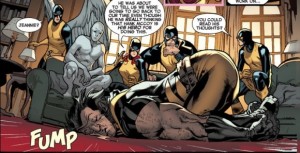 Jean reveals that Wolverine’s thoughts are that he wants to send them back immediately but also that Beast is his new hero.

Scott still can’t believe he killed his mentor.  They see Cyclops on the news.  Bobby can’t believe televisions are not better in the future.

She also reveals that Wolverine runs the school.  Bobby can’t believe a guy like that, with claws, will run a school.

Hank knows that his present day self is dying.  That’s why he risked time itself to bring them forward.

Scott wants to really meet himself and have a nice chat.  Bobby knows that Cyclops is seeking new mutants, so maybe they should.  Just then a news reporter states a new mutant has been found at the University of Dallas, so they take the Blackbird and away they go.

Kitty enters the room and sees only Wolverine sleeping away.

Issue ends with the X-Men watching the Blackbird fly away.  He can’t believe Jeannie is around again.

Not sure when I will review the third issue but it has been great to go back to these early issues of All New X-Men.