Dead Space, Part One of Three

Alan Davis and Mark Farmer left the series and now we have Lobdell back on board.

The opening narration reveals that, on the way back from the Days of Future . . . Future, Captain Britain got separated in the timestream.  There is a handy editor note, from Suzanne Gaffney, that informs that we hadn’t missed an issue, we are merely jumping into the action.  We are also heading towards trying to fold Excalibur into the X-World.

Meggan is catatonic, in the waterfall, her has morphed her body to match the water.  The team is quite worried about her.  Rachel can’t reach her, even with her telepathic powers.

Kitty gets out of a car, she’s in a foul mood.  To make matters worst, microMAX is now in charge of the team.  He is wearing a business suit.  He believes that, with Captain Britain and Meggan gone – the team really needs to train more.  Kitty is in no mood for this jerk’s dick attitude.

Overhearing this, Kylun leaps from a tree and microMAX grows in size and prepares for a fight.  Kylun was merely testing his new friend’s wit.  microMAX is in charge, by FI6, and he hints at previous storylines – exploding bathrooms, dinosaur doppelgangers and cross-time capers.  Did Dan “Amazing Spider-Man” Slott really read these issues?  Does he even remember writing this issue?

What has Kitty in such a foul mood?  One of her closest friends, Illyana, is dying of the Legacy Virus; and she’s suffered too much death with Doug and now Brian’s disappearance.  To make the tears continue to fall, she thinks about Kate Pryde and how she was all alone, with her friends and family dead.

Feron arrives, and like a giant douche, commands Kitty to stop crying. 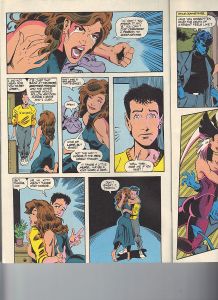 This, of course, doesn’t work as it isn’t – at all – what one should do to someone who is crying.  Feron’s intentions were to distract her and have her be able to direct her anger towards something else.  She finds it sweet, and Lockheed is so relieved!  Kitty hugs Feron, for his lame attempt as she really needs a friend right now.

Why she doesn’t go to Kurt and Rachel, is beyond me.  Though we do see this pair, as they go back inside.  I get that Rachel was always ‘edgy’ in her manner of dress but she just looks like a biker chick.  Rachel apologizes to Kurt, for being so indifferent about losing Brian.  Cerise comes flying into the room and grabs Kurt, they instantly start making out.  She hasn’t see him in 15 days.  Which I can’t recall if she didn’t go on the mission- or why she didn’t.  Kurt is upset, as no one seems to be caring that Brian is gone.

There is an ad for Mortal Kombat, coming in September 1993!  I was in the seventh grade and people were obsessed!  Rayden / Sub-Zero / Liu Kang / Johnny Cage / Sonya Blade / Kano / Goro / Scorpion, the original eight!  The franchise has gone so much over the past 16 years!  It still can’t even play its own self!

A Grove Behind Braddock Manor.  As microMAX and Kylun are sword fighting when they are ambushed by . . . THE STARJAMMERS!

Is Stridex even a company, any more?  I recall these zit pads never working.

Kitty and Kurt don’t understand why their allies are harassing their new team.  Corsair and his peeps are here for the worst war criminals in Shi’ar history.  So the team thinks this is regarding Rachel, again. 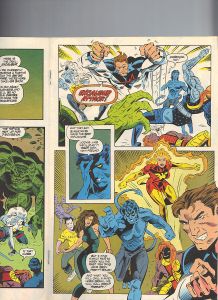 microMAX gives the order to fight, which Kurt disagrees with but joins the fight.

The two teams haven’t seen each other since Spotlight on Starjammers 2, which had them fighting there, as well.  Hepzibah fights Kurt, with Lockheed trying his best to assist. Feron binds Cosair, who has flashbacks to when the Shi’ar first captured him. 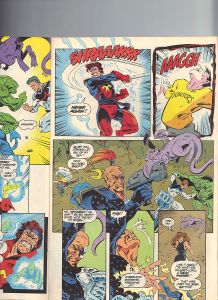 Feron is taken out.  Lockheed has changed targets to, Raza.  Who I had as an action figure in the 90s and totally didn’t play him correctly.  Lockheed’s good buddy, Shadowcat, phases through Raza and he is down.

Rachel announces that this fight is useless, she isn’t going to go with the Starjammers.  Chod states that they are not here for her, which surprises Nightcrawler.

Cosair says they are here for a grave murderer of the Shi’ar.  Cerise arrives, in full battle garb.  This storyline is the beginning of Cerise leaving the title and not appearing again until issue 125.  I’m not sure why editorial thought they had to get rid of her.  I believe, just from reading the rest of the series, that they wanted to get the team back down to the main five original members.

Some titles that were on sale, that week –

Corsair instructs Hepzibah to open the stargate and the Starjammers and their new prisoner disappear.

Rachel is telekinetically keeping the stargate open, Kurt had this plan the entire time.  Kitty reminds him that someone should stick behind for Meggan – which is odd as that is what Pre-Ahab and Moira are there for.  Well, Moira lives here too.

The rest of the team go through the portal, Kurt doesn’t have a plan at all, he’s playing it as it goes – as the issue ends.

The back cover ad is for Crunch n Munch, that had Marvel trading cards, which I feel like was on the back of so many covers during this year or era.

The next issue we are reviewing is issue 74 of Excalibur!