Deadpool, Part One of Four

We’re ending Deadpool with all four parts of the introduction of . . . Ultimate Deadpool!

I need to settle on which nine images to use but I want to use them all!  Probably go with the last eight issues of the issue as those deal with Deadpool but the first half of the issue are so great!

Spider-Man is trapped within a few rings of . . . The Ringer!

The Ringer has some attitude, that I really enjoy.  He’s from Waldorf, Maryland – so he’s pretty cool.  What isn’t cool, is that he makes some anti-mutant comments.  Spider-Man, is stuck on the whole Maryland comment.  So Kitty Pryde, in a sweet new outfit (designed by Bagley) has to call the Ringer on his racist comments.

Pryde right hooks the Ringer.  Meanwhile, Spider-Man is being squeezed tight by the rings.  Pryde keeps fighting The Ringer.

Pryde keeps patting down Ringer, as she keeps trying to shut down his gizmo that allows him to fire off his rings.

Pryde takes note of Spider-Man being constricted to death. 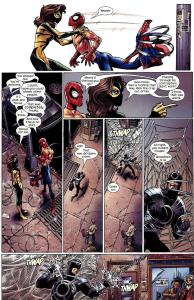 Pryde phases Spider-Man through the rings, costing him a shirt.

I do enjoy these two’s romantic banter.  She likes him shirtless and he learns that she can phase other people.

The Ringer took off a while ago but Spider-Man catches him, just like a fly. 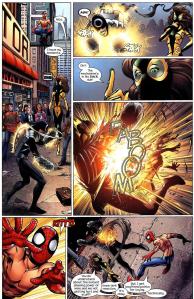 While Ringer tries to break through the webs, Pryde notes the mechanism on his back.  With one swipe, it explodes!

Spider-Man freaks out, saying her real name and everything.  She has to, again, mention how she is safe and can take care of himself.

Spider-Man puts on his shirt and Pryde asks him to check out the Ringer’s butt.  This page is so fun!  The Ringer having his wallet with him, has really stuck with him.  Do criminals not take their wallets with them, on heists?  I was worried about leaving my wallet on my wedding day.  My buddy Greg got married for him, and as his best man, I held his wallet for him, that day.  He returned the favor for me but I wasn’t really sure what to do with it.

Pryde starts shouting that The Ringer’s real name is – Anthony Davis from Medina County, Ohio.  Ohio, I get, as Bendis is from there, but I wonder if the name is somebody.

The police arrive and Spider-Man tells Pryde that they have to go.  Pryde keeps shouting Davis’ name.  Spider-Man grabs her and the two swing away.

Pryde gives Spider-Man some shit for having lame villains.  Pryde agrees that Ringer is a step up from Shocker.  Spider-Man tries to defend his rogues gallery by saying his are better than the Ultimates.  Pryde is quick to point out that the Ultimates only fight each other.

I’m probably going to try to keep this page too as it is such a great showing of these two’s budding relationship.

Peter finally gets around to asking Kitty about her new costume.  She wants “Kitty Pryde” to start dating “Peter Parker” so that they can go around and be a real couple – not hiding from his Aunt May and others.  She doesn’t want any confusion with Shadowcat dating Peter Parker and being best buds with Spider-Man.  People will be quick to add the situation together.

Kitty wants Peter to come up with a new name for her new costume identity.  It is a shame that we never got more of this costume.  All he can come up with is “Spider-Girl” typical dumb dude. 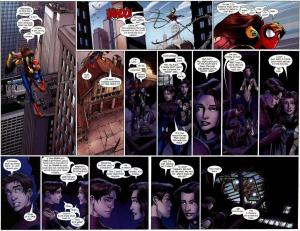 Kitty does enjoy webslinging across the city.

Kitty is afraid that she put too much thought into this costume and situation.  Peter is worried about his aunt and how she will take the news.  Kitty brings up the awesome point that, if he had a girlfriend, it gives him a better excuse to give his aunt – besides having to come up with a lame excuse every time.

Kitty simply wants to go to the movies and hold Peter’s hand.

They joke about lame villains and how the X-Men have cool news.  She lists Magneto, Hellfire Club (which is pretty lame in the Ultimate Universe), the Brotherhood and ends with Mojo.  Peter hasn’t heard of Mojo before – which he is going to hear the name a bunch, in this arc.

Kitty will tell Aunt May that she is a mutant, Kitty doesn’t hide that from anyone.  She would also mention the X-Men, as anyone in this modern age – would end up googling “Kitty Pryde” so might as well get out in front of it.  Peter wonders how he would explain how he is dating a world famous superhero.  Kitty offers that they met at the mall, or some such place.  Celebrities date non-celebrities, all the time.

The X-Plane arrives to pick up Kitty.

The X-Men got tired of flying to the city to retrieve her, so the plane is on autopilot now.  Peter wishes he had a robot plane, he barely has anything.

Peter still likes Kitty and she refuses to take back the comment about his lame villains.

Look how cute they are! 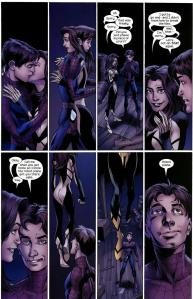 Kitty gets sweep up in the moment and phases her face through Peter’s face.  It is quite the mood breaker.

Peter wants Kitty to call him, once she is safely at home.

Now we begin the whole Deadpool & the X-Men pages, so I’m definitely keeping these images to the end.  If you see the images above, I’m still debating which ones to keep.  I know I want the one with Kitty taking off her mask and the two page spread but those opening pages with The Ringer are such a delight to share!

Poor Kitty, she’s pleased that she made big moves but worried that she is moving too fast or taking the relationship too seriously.  Apparently she isn’t talking to her teammates about her relationship and creating a new superhero identity.  She is purposely keeping her relationship private, from her team, as she doesn’t want them to ruin it.

Kitty enjoys Lays Sour Cream and Onion, which I do too.

She has doubts about Peter’s commitment to the relationship.

Kitty goes back to an empty mansion – which must be unsettling.  She runs into Wolverine. 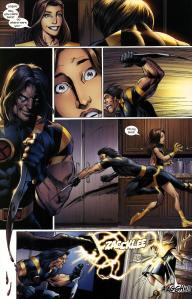 Kitty is happy to see Wolverine, that is until he pulls a nice on her.  Kitty starts phases through a wall when she takes a lightning bolt to the back.

The bolt actually hurt her, which confuses her.  Storm checks in on Kitty but doesn’t recognize the name, Ororo.  Which is an odd name to hear, when one doesn’t expect to hear it.  Kitty starts phasing again, as Storm fires a gun at her.

Clearly Xavier has planned for this as Kitty knows where to go.  Her first thought is to call the Ultimates as Nick Fury would know what to do.  In her rush, she touches the computer while in her phased state – so it short circuits.

The autopilot does get activated in the X-Plane.

The group that has taken the X-Men, have caught up to Kitty and knock her out.

We get two pages of non-Kitty (for a total of three in this issue – as the first page also was Pryde-less).  Peter is being caught off guard that Aunt May has a date.  As she drives off, he sees the X-Plane and takes off to follow it.  He sees the plane is empty and as soon as his feet land on the floor, it takes off for Westchester.  We find out that it is only a twenty minute flight, so that seems reasonable. 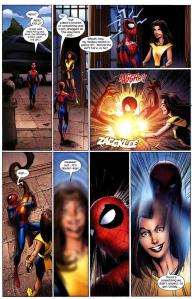 The joke about “Hello Kitty” I’m reminded about, every time I’m at Hastings.  We have an endcap that features Hello Kitty merchandise, which as far as I know – we never actually sell.  Is there anything that keeps Hello Kitty on the top of mind for Montanans?  I’m pretty sure there is no new cartoon series or celebrities keeping Hello Kitty in the minds of common folk.

Spider-Man comes across Kitty Pryde, but she doesn’t say anything and instead, zaps him.

I’m wrong, there are four pages that Kitty doesn’t appear on.  The final page shows Deadpool and the Reavers.  Ultimate Deadpool doesn’t talk in yellow word balloons – which is disappointing.

It is going to be a fun ride!