Such a good way to open a comic, with the main character waking up.  How does Spider-Man ever see as much as he does, can he even see directly in front of him?  That’s quite the blind spot!

Spider-Man sees Kitty Pryde and starts to freak out.

One of the Reavers wants to hit Spider-Man and Deadpool gives the go-ahead.  Another one wants to take off his mask, as if they would even recognize him.  Deadpool wants the mask to stay on, one has to respect masks.  The Reavers kick everyone out of the plane.  They left Spider-Man’s webshooters on, so he is able to control his descent.

Cyclops can be seen blasting the ground, to slow his fall.

Spider-Man thinks he may be in Central Park – he will learn how wrong he is.

Once Spider-Man lands, he notices he is missing a boot.  So funny and embarrassing!  Out of the woods, comes a bulky Reaver and he seems more startled than Spider-Man.  Spider-Man quickly learns to aim for the fleshy parts and not hit the metal parts.  After punching him out, Spider-Man takes off.  He runs into a metal wall. 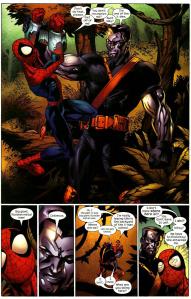 Turns out, that metal wall is Colossus!  These two have some fun exchanges.  Colossus is hurt that Spider-Man doesn’t recognize him, from the brief times they’ve met before.  Spider-Man’s “Aunt May” guess, makes me smile.

Colossus takes off the metal braces that were keeping Spider-Man’s hands bound.  Spider-Man and Colossus don’t know where they are.  Spider-Man starts shouting for Kitty.  Last he remembers, Kitty attacked him.

Colossus, like a good teammate, he defends Kitty.  I really do prefer Ultimate Colossus.

Colossus recalls that Storm attacked him.  Spider-Man doesn’t recognize who “Ororo” is.  “African one with the weather powers” is a pretty apt description.  Colossus adds the clues together, and figures there must be a shapeshifter.  Which I really appreciate, as that bugs me on shows – wherein the characters are forced to play dumb and can’t figure out what is happening.  Even though they have all of this experience and nothing like a shapeshifter should surprise them.

Spider-Man thinks that, instead of a shapeshifter – women may be finally raising up to take control the world.  He always suspected this day would come.  They see Cyclops’ signature blast and head in that direction.

We catch up with Cyclops, ahead of the newly made friends.  He is fighting four of the Reavers, on his own.  I can’t help but read Cyclops’ “what are you doing here?” question to Spider-Man as him being annoyed that a non-X-Man is present.

Cyclops was attacked Wolverine, which confirms Colossus’ theory.  Spider-Man has made a reference to Soul Caliber Three and now, Bionicles.  The cyborgs smell like biology class.  Which I get the reference but I didn’t have that style of biology class – no dissections for this guy.  In junior college, we almost dissected a pig.

Cyclops wants to know where Jean is, which reminds Spider-Man that he wants to find Kitty.  Cyclops also doesn’t want Spider-Man shouting.

Cyclops can feel that they are being hunted, which Spider-Man now feels that sensation too.

Another Reaver pops up, hinting that he is talking to someone and someone may be watching him.  His name is, Bonebreaker.  Glad someone is being name checked.  Bonebreaker is talking in English but what he is saying, falls flat as the heroes don’t understand the context.  In mid-monologue, he is electrocuted.  Storm is not pleased.

Some jets are on there to way to attack the X-Men.

The heroes land on the ground and one of the helicopters crash.

Kitty Pryde, the best X-Man!  That is a sweet hug Spider-Man and Shadowcat give each other.  The stakes are pretty high and they know it.  Shadowcat likes that Spider-Man got on the plane and came to help her.  Spider-Man wonders if Shadowcat is currently the shapeshifter but she isn’t.  Someone had to ask the question.  She confirms she isn’t by telling him something that he would know.

Nightcrawler bamfs in, and he’s the first to recall the storyline in Ultimate X-Men 54 – 57 – The Most Dangerous Game.  Not a bad trade.  The X-Men that were present on Krakoa were – Cyclops, Nightcrawler, Jean Grey, Iceman, Dazzler, Colossus and of course, Shadowcat.

If I wake up on a strange island, I’ll imagine it is the same strange island from the previous time I was there.  So I’m not sure why Colossus nor Cyclops had that thought before Kurt had to say it. 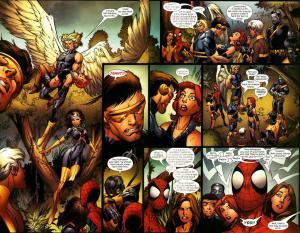 Angel, holding a knocked out Jean, and Rogue float down.  Cyclops mentally shouts at Jean, forcing her awake.

I do like how thick Nightcrawler’s accent is in the Ultimate Universe.

Great use of making the lettering lighter, to imply whispering.  Shadowcat gives Spider-Man a quick rundown of what happened.  Now Spider-Man knows that people are watching this adventure, like sick jerks.  Shadowcat reveals that it has been a month since that storyline.

As Spider-Man is realizing how disgusting this entire thing is, Deadpool and the Reavers arrive.  Deadpool tries to justify the act, by saying that the X-Men are terrorist, so why not kill them.