The issue opens with another flashback to the beginning days of K’un Lun.  The Iron Fist school was the first.  Quan Yaoiu was the first Iron Fist, the school was always the first, at everything – realizing that the war will ruin the region and the first to win the Thirteen Chambers.  Danny Rand, the current Iron Fist, knows that Zheng Zu had Shang Chi murder Lord Tuan.  Rand wants to defeat Zu, in the Thirteen Chambers, so that he can be the emperor – then Shang Chi would have no place to hide.

Zheng Zu opens the doors and addresses his people.  Today is the day of the Thirteen Chambers tournament, apparently it is only suppose to last one day.  The other masters of the schools are – Wise T’Challa of the Panther Clan / Brave Ava of the House of the Jade Tiger / Savage Lord Namor from the Halls of Atlantis / Mysterious Drew of the Spider Cult / Unyielding Karnak of the House of the Terrigen Mists / Noble Creed of the Tooth and Claw / Shattered Spector of the Faces of the Moon / Most Deadly Lady Mandarin of the School of Spirit Blades / Loyal Red Sai of the Red Hand and Rand-K’ai of the Iron Fist.

If Zu wins this day, he will be the first emperor to rule K’un Lun for one hundred years.

Like a pimp, Shang Chi arrives, claiming he is the Master of the Lowest Caste.  Rand is not thrilled by this and Zu is surprised.

Shang Chi states, according to ancient rule, he is allowed to participate as he has a school and students.  Zu has to allow his son to enter the tournament.

Zu dictates who Shang Chi’s opponents will be.  Zu raises the stakes, once he defeats his son, he will kill all of his students!  So we need Shang Chi to win (or at least Zu, to not win) so that Kitten and Lock survive!  Rand looks forever to facing Shang Chi in the tournament.

Zu raises his hand and a giant statue comes out of the ground.  Everyone enters through the giant mouth of the head and. IT. IS. ON!

For a seqeunce that this series has been leading up to, for three issues, this does not disappoint! 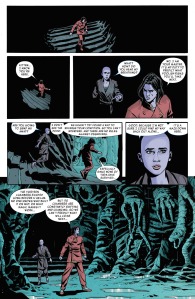 Shang Chi feels that Kitten has been following him, and asks her to come out of the shadows.  There are no rules to observers, but none survive – which I’m super curious why that is.  The issue doesn’t explain that but the battles are pretty intense, so I imagine that it is due to either debris falling on the audience or bodies being thrown into them.  Shang Chi explains that no one really knows how the Thirteen Chambers, really work or how they came to be.  It changes every year.

Round One!  Namor v Shang Chi!

Namor gets the early advantage in the fight, as he can breath under water.

Since Namor can breath underwater, that means his lungs are making that possible.  Shang Chi has the ability, the Mortal Blade, to turn his hand into a blade (get it?) and he punctures both lungs of Namor’s.

I like how the tournament doesn’t require the deaths of the masters, that way, they can get better and stronger AND there isn’t a new one every year.

We get a montage of the other fights.  Which is disappointing, only in that I was expecting maybe two issues dedicated to the tournament.

Shang Chi defeats several masters – the Spider Clan person, Karnak, White Tiger, Lady Mandarin (maybe?), Moon Knight, maybe Sabretooth (who wanted to fight Iron Fist first, which has to be a reference to his first appearance being in Iron Fist, right?) and Black Panther.  Black Panther reveals that he has fought in more tournaments than any other great master – which I had to reread twice as I was thinking how he could have fought more than Zu but he is the Emperor and not a mere master.

Shang Chi isn’t fueled by desire of power, he just wants to unseat his father.  No one else can do it, but him. 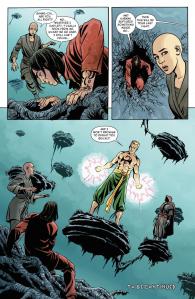 I wish we got more of the Black Panther fight, besides the two panels, as Shang Chi tells Kitten that T’Challa ruptured something of his.  Shang Chi has nothing else left, in the tank.

Of course, the issue ends, with his next opponent revealed . . . IRON FIST! dun Dun DUN!

I like how Iron Fist promises to make this, not quick.  This series keeps getting better!