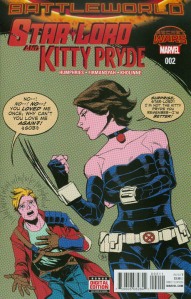 I had to add the Annie Wu Variant to my Wishlist.

Pizza My Heart.  Best Slice in the Manhattan Domain.  Shadowcat has Quill handcuffed to her arm.  We get our first glimpse of . . . The Mutdroids! 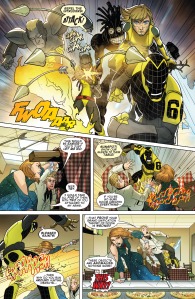 The Mutdroids are awesome!  These are robotic New Mutants – Cannonball, Dani Moonstar, Warlock, Magik and Sunspot.  Shadowcat is not intimidated by these foes.  She slices Sunspot’s knees, which is awesome.

Quill is trying to understand why Shadowcat is working for Doom.

This Shadowcat is intense!  Cannonball comes . . . cannonbaling towards the non-couple, and Shadowcat opens the microwave and melts the young man from Kentucky.

Quill is trying to explain to Shadowcat that Battleworld is a fake, he is from the previous world, and knows that Doom has masterminded this world’s creation.

Quill gets in the fight, flinging pizzas around the place.  Shadowcat phase punches Dani to her dumb robotic face.  So fun having Dani say “malfunction..the focused totality of my psyyyychic powwwwwers” even though that isn’t the thing she says – that would be Psylocke but I love that silly expression.

We get a slight tease of a Shadowcat v Magik fight but it is over, off panel.

Quill takes the time to see the similarities between this Shadowcat and his fiance, Kitty Pryde.  He can’t help falling in love, though she frightens him.

We do see that Shadowcat has pushed her claws through the bottom of Magik’s head and straight through her eyeballs.

Warlock shows up, upset that all of his friends are dead.  Shadowcat notices that he is speaking with nouns, so she shreds into him.  Doug was using Warlock like a suit of armor.  She forces him to reveal where Gambit is.  He tells her Gambit is at the museum.  Shadowcat and Quill start walking away when Doug makes the fatal mistake of recognizing Shadowcat.  She can’t let him live, and snikts him through the chest.  Warlock is sad and self-destructs.  Selfgoodbye.

The Union of Doom Square.  Later.  Shadowcat wakes up, to discover that Quill has undone his handcuff.  She is impress that he didn’t run off.  She saved him, so he felt obligated to stick around. 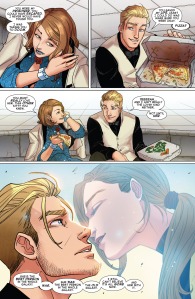 Since the stakes are low, they take the time to chat.  This issue can be broken down into three parts, the first opening battle.  This nice scene in the Square and the final one, but I really adore all three of them.  This is such a great issue.

Shadowcat asks about her counterpart, Quill really loves her.  The coloring in this issue, is outstanding.  Kholinne makes the issue look light hearted and fun.

Shadowcat asks if the two ladies are the same, and Quill is far to quick to say that they are nothing alike.  This, naturally, offends her.

I can’t believe we got an issue where Kitty Pryde killed both Magik and Doug Ramsey!  At least there wasn’t a scene where she strangled Lockheed!

They get heated, which is also fun to see.  She’s a freakin’ psycho.  He’s a lousy singer and she isn’t good at kissing.

I like the very real quiet beat there, for the top panel.  The two let the moment rest, probably replaying the previous minutes, in their heads.

Quill needs to have the situation explained to him.  Kitty can’t request backup, as she is on a renegade mission.  Doom has two hands – one hand with Science, the other, Law.  The two often collide.

Shadowcat confirms that she is from the Kingdom of Apocalypse, so now we know that she is the AoA Shadowcat – or some version of that one.  If she didn’t go work for Doom, everyone in the region would be killed.

Shadowcat allows Quill to walk away but he is committed to follow this through.  This doesn’t thrill her, at all.

The Doomenheim Museum.  Quill isn’t impressed that Doom made himself a museum.  Shadowcat has to explain that Doom had nothing to do with it, Doom doesn’t care about any of this nonsense.  She phases the two of them through the ceiling, which the falls excites Quill.  Who lets out a giant scream, when they are on a covert mission?

They fall to the ground, she falls on top of him and they look like they are about to kiss.

Shadowcat pulls away, as she sees Gambit’s bag, with the lock of hair in it.  She opens the bag to reveal . . . WIDGET!!!  That’s right, ya’ll, Humphries straight up brought Widget back!  So awesome!

Widget is able to cancel Shadowcat’s powers, which informs her that Widget is an alternate version of herself.  Quill doesn’t know how to make of this.  Gambit, who I haven’t enjoyed this much – in years – waltzes in.

Issue ends with Gambit revealing that he wants to add Shadowcat to his own collection.  So creepy!  but understandable – still creepy!

Such a great series!  By far, the best series to come out of Secret Wars 2015 – including the mains series, itself.