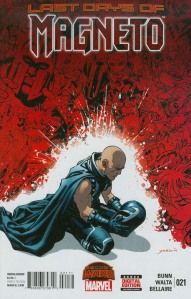 This issue, which is pretty great, has plenty of flashbacks.  This great website has annotated issues, three of which I own and will be reviewing next.

The buzz for this title has been outstanding, and I’m glad I finally had a reason to buy an issue.  Bunn did such a great job with this series, that it got him the Uncanny X-Men Volume Four gig.  I’ve been a fan of Walta’s work since the Dark Iceman Saga in Astonishing X-Men.  Bellaire does such a good job, with giving the present day and the flashbacks, very distinctive looks.

This is the final issue of the series, has – from the cover – these are Magneto’s Las Days, prior to the start of Secret Wars 2015.

I guess, from the recap page, that Post-AXIS, when Magneto lost his parentage of Scarlet Witch and Quicksilver, so he has made attempts to get closer to his only child, Polaris.  Unfortunately, he has absorbed her powers, so that he can attempt to fight off the Incursion, that ends the Marvel Universe.  Spoilers, he doesn’t succeed, but I like the idea of him, admitting to fight the Incursion.  Which does form a nice framework, that as he sacrifices his life, he also sees his life, flash before him.

The reds of the flashbacks are so bold, as are the yellows of the present day.

Issue opens with Magneto and a flashback to his, and the X-Men’s first appearance.  He is fighting the troops at Cape Citadel, as the X-Men approach.

In the present day, Magneto is absorbing all of the military planes – which, naturally, looks like him attacking them.

Flashback # 2.  This is from Uncanny X-Men 150, wherein Magneto sinks a Russian nuclear submarine.  The submarine was filled with soldiers and Magneto (as a hologram) watched them die.  I’m surprised the Marvel AR logo isn’t all over this issue.

There is an ad for the Guardians of the Galaxy cartoon, coming to Disney XD, it already aired on September 26 (I’m typing this on, September 29th – which is forever ago, when you read this!) but I have to wait until it comes to Netflix.  Too bad the cast is missing Kitty Pryde and Thing!

In the present day.  Magneto is thinking about how he will never shake the label of being, a monster.  It is uncanny how much the X-Men have just shrugged their shoulders and accepted these deaths as something that happened but they don’t question it now.

Raleigh, Magneto’s lady companion – I guess – tries to comfort Polaris.  Polaris is having none of that nonsense, as Raleigh lured her there, just so Magneto can steal her powers.  Raleigh has a leg brace, a metal one, that tears off of her leg, Polaris catches her, before she can fall to the ground.  Magneto is absorbing all of the metal, that is around.  Polaris recognizes that Magneto, is always good at sacrficing himself.  Especially as he doesn’t usually pay the price.

Flashback 3.  This one is from X-Men 87, the conclusion of the Magneto War.  Xavier, in classic hoverchair, is confronting Magneto, about how he has gone too far.  They couldn’t try Magneto back in Uncanny X-Men 200 (they tried) but flatscans won’t get a second chance.  Magneto will not stop until mutant kind stands above the humans.  Magneto, at this point, was trying to tilt the poles, which is what Ultimate Magneto did, at the beginning of Ultimatum.  If humans could have given him a small country, they sure would have, if they known the utter destruction that that action will bring. 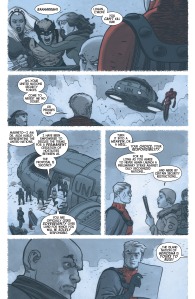 Wolverine tries to rush Magneto, Rogue and Storm holds him back – which is silly, as the worst Wolverine can do, is be thrown down into the snow.

The United Nations Security Forces arrive, I can’t recall if this is the North or South Pole, I believe it is the South Pole, a it doesn’t look like a floating land mass.

Dr. Alda Huxley, representing the United Nations, is here to cede Genosha to Magneto’s rule.  That face of Xavier’s, is so fantastic!  Made even better, by the smirk of Magneto!

Present Day.  Magneto is taking on all of the power of every device, that is around him.

I’m not sure what the quick glimpses are for Flashbacks 4, 5 & 6.  The sixth involves the Avengers but the other two look like generic Magneto v Wolverine & Cyclops and humans (for the fifth one).

Flashback 7 is from X-Men 25, so the flashbacks are not in chronological order.  I owned X-Men 25, until this post but Kitty Pryde isn’t involved in this issue.  Nightcrawler and Captain Britain are, but not Shadowcat.  She is in Wolverine 75, which takes place, after X-Men 25, but I added it to my For Sale pile, over at MyComicShop.com.  Their website stated that they won’t be buying it for a few months, but still, another lost that this blog has caused.  X-Men 25, of course, is the issue wherein Magneto ripped out the adamantium from Wolverine’s skeleton, which brought on the bone claws of Wolverine.

Present Day.  Magneto forces all of his absorbed energy into the Incursion but it fries him in the process.  Then it engulfs the of the peeps in the crowd.  At least Magneto tried.

Such a great issue!  I may have to try to read the trades of this series, or at the very least, follow along Bunn’s Uncanny X-Men run.