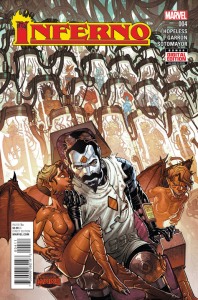 Hopeless makes the good call to have this issue open with a pleasant memory of Illyana, as she has nearly killed the X-Men last issue.

Limbo, Now.  Colossus is force to look outside of the barrier and see a destroyed New York City. 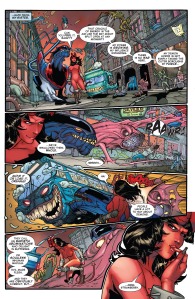 Darkchild is walking the streets, like the boss that she is!  Look at those goat legs!  She has nicknamed the deformed Nightcrawler, Bamfy.  Darkchild is growing stronger, as she stands on this side of the field.

Longshot is sneaking around, thinking he has a chance to take on Darkchild.  Which, with his luck powers, his chances may be pretty good.

The top panel confirms that this issue takes place before Secret Wars 2015 5.  Strange is here to offer Darkchild the position of Baron.  Scott Summers is no longer fit for the job, as the domain is clearly no longer under his control.

Meanwhile.  Jean seeks out Scott, as he is in his own head – making plans.  Longshot interrupts their conversation, to tell Scott that he is no longer Doom-chosen.  Even with this news, Scott doesn’t want to abandon the city.

Scott is tired, they allowed Illyana to take Limbo and now, after five years, she’s taking New York.  They shouldn’t allow this to progress, as there will be no place to hide.

Bamfy brings the demon horde to the remaining X-Men.

Elsewhere, In Limbo.  Colossus, Domino and their new alliance with Madelyn Pryor, Havok and young Nathan Summers.  They are trying to get to the end of Limbo, but in seven blocks, they have fought five groups of demons.  They are losing goblins (as Maddie is the Goblin Queen) but Maddie doesn’t seem to mind.  They get respawned after five days.  Sym is part of this traveling band, so he is going to try to undermine the team.  That’s what Sym do.  Havok is prepared to shut him down.  Maddie needs to take the fight to Illyana, as the alternative is to wait around until a super strong Illyana comes to rule the entire domain.

Meltdown comes out of the ground, to rejoin Colossus and Domino.  They are happy to see that she isn’t dead, like they thought.  Tabitha takes the Limbo folks into the sewers.  Maddie doesn’t really like the idea, but who would?

Madelyn is suspicious of why Boom Boom isn’t more hurt.  Tabitha had her guts hanging out of her, but she is ready for round two.

Colossus hears demons and knocks down a sewer wall, which I’m not sure if that was the best way to handle the situation.  Are sewer walls expendable?  I would imagine they are serving an important function.  Bamfy is leading the demons.  By knocking down the wall, Colossus’ side and Madelyn’s side have joined the X-Men.  Jean is overwhelmed by Bamfy, as she doesn’t want to hurt her friend.  Plus, she’s the weaker of the two, between her and Madelyn.  I do like how much Pryor has about how Kurt is dead as she tames Bamfy.

Colossus cuts down the head of Darkchild’s lieutenant, a horse heade red demon, with wings.  Once that is over, Colossus takes the time to apologize to Scott, as Scott was right about his sister.

Cyclops straights blasts the dude, as OF COURSE HE WAS RIGHT!!!   Darkchild has been tormenting peeps for years and they were losing people, trying to reach out to her.  Colossus feels like he has been blasted enough, so he clearly doesn’t know how much damage his little snowflake has truly caused.

Mister Sinister arrives, with his own demon horde.  He introduces himself, as he doesn’t believe he has met all of them.  I’m not sure how that lines up with the original timeline but I’ll take it for the truth.  Goblin Queen is surprised that Sinister lives, she thought Havok killed him.  Havok had that same thought.

Two page house ad for 50 Years of SHIELD, which is pretty amazing.  I do like how the characters of the Agents of SHIELD show are now proper Marvel characters.  Of the six issues spotlighted, I’ve bought SHIELD 10.

Tabitha vouches for Sinister, as he saved her.  She tells them that Sinister’s demon horde are actually clones of Tabitha, and I figure they must have demon blood in them.  Maybe it is goblin blood, now that I think of it.  They are definitely red.  Sinister explains that they are a mix of Tabitha’s blood and three succubus, and they are a mutant / demon hybrid clone army.  He also reveals that he has tinkered with Tabitha’s brain, to make her more subservient.  Explaining one of the bigger reasons why I don’t care for Sinister.

Issue ends with Sinister stating that he will be the heroes’ villain later, today, he is their savior.