The Shield.  Fun joke on the credit page, about the title of the series being about how the story is about a siege, on the Shield.

I believe this double page spread is is done by Julian Totino Tedesco, based off of the TT on the far right.  Pretty great spread!

Not only do we get the hive mind blue Kitty Pride, we also get a pretty large Lockheed!  I do like how Gillen combined Nick Fury with the Fury, old school Captain Britain villain.  Pretty clever!

Brand has sent a request to the barons of Battleworld, send aid now!

Marvel put the pull out ad in the middle of another double page spread.  Super awkward.  The Summers Clones take on Nick the Fury.

Scott tells Brand that he is down to the final 100.  I need to start using “fluster of clucks” as it is fun to both write and say.  Kang is trying to figure out a way to use the timestream to take out Fury.  Brand uses Thing to transport them to the Units.  We learn that the Units are in love with each other, so they are committed to ending Fury and the army of Ultrons.

The Units don’t do that great of a job, taking out Fury but they slow him down.  Kate Bishop and Ms. America don’t stand up, much better, against Fury.  This is all a good distraction, as Kang grabs Fury The Fury and goes through time.

The plural of Units is Unite, apparently.

Kang uses the chronomines to hurt Fury, which actually works.  With Fury out the way, now they have to deal with the Perfection (the army of Ultrons) but they are prepared for that.  The only problem, now, is that they barely survived the fight with Fury. 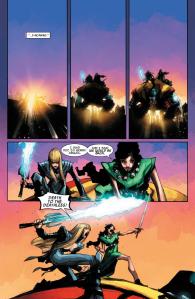 Good thing Magik and Leah arrive!  I’m so glad that Magik lives!  I do like the idea of them traveling on a giant Colossus.

I’m not sure who provided the art, for this double page spread.

Through Abigail Brand’s War Journal, we learn the motivation of Illyana and Leah.  Essentially, it boils down to them being in love.  Doom doesn’t care about anything, south of the Shield.  So the two demonic queens fled their domains and dove into the southern realms.

The two are married now, great for them!  They are also in control of the Marvel Zombies. 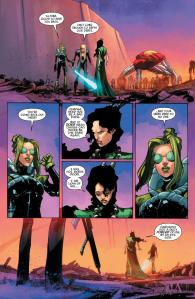 It is great to see Magik, not evil like in Inferno and in the present day of the pages of this series.  Baby Magik, in Giant Size Little Marvel AvX, has been adorable.

The ladies are not going to rejoin the team, they will not serve God Doom, at all.

Brand threatens to out them to Doom, but they all know she won’t.

Kang returns, triumphant.  Kang and Brand have a nice hug.

The issue ends with Thanos, the real deal, arriving on the scene.  He surrenders himself to Brand and Kang.

“Time Before the Fall of the Shield : 1 Day and Counting.  There is No Hope.”