Issue opens with a fun moment.  Brand and Kang confirm that the man, before them, is Thanos – as soon as he confirms that he is him, they pull guns on him.   Thanos tells them to stop attacking, he only wants to talk.  If they don’t want to listen, he will reactivate the Fury.  Thanos wants to be taken to a small cell now.

This issue, and maybe Old Man Logan 5 – seem to be the only two issues that actually tie in to Secret Wars 2015.

Thanos hints that he knows about pending attacks.  Brand will think about listening to him, and they leave to investigate some leads.  Once Thanos is alone, he asks to talk to Ben Grimm, who is ever present as he is the actual shield.  Grimm isn’t sure why Thanos calls him, “Ben.”  Thanos hints that this conversation will take some time.

Meanwhile, on the top of the shield – Leonardo da Vinci, Ms. America, Kate Bishop and Scott Summers, are chatting.  I like this moment of downtime, something comics could use more of.  They are talking about pizza and parsnips.  Kang gets Summars and da Vinci, as Brand needs their help with interrogation.

Thanos, essentially, wants to unseat Doom, he is a false god.  I believe that Thanos is making references to the Secret Wars 2015 Infinity Gauntlet series.  Now that there is peace, beyond the southern border of the shield – those armies can now turn their attention to Doom.  Thanos offers that they can try to kill him but the attack is about to start . . . NOW! 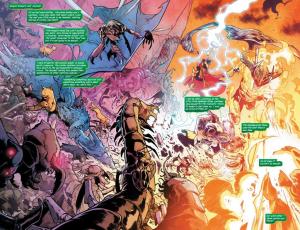 I can only guess that Pepe Larraz & Ian Herring did the above double page spread.  Choo signed his page and the other double spread looks like Sienkiewicz, especially with the Warlock like things.

The poor Kitty Pride, having to fight on, even though poor Lockheed has fallen.  I do like how the Kitty Pride are either yellow cats or blue cats – great use of her color scheme.

Jack of Hearts has fallen, as have the Winter Soldiers.  Squirrel Girl was believed to be dead, but like she do, she got better.

The Thors showed up and start cleaning up the mess.

Thanos and Grimm get to keep talking.  From my understanding of Secret Wars 2015 6, is that Doom made Battleworld.  He made Human Torch, the sun and Thing into the planet (or at least, the southern hemisphere).  Sue he married and had two children, Val and Franklin.  They made up the Fantastic Four, but they didn’t last.  So this Thing, doesn’t believe Thanos, at all.  Thanos shares, that back in the old Marvel Universe, he loved one that he will see again, only when he died.  If he dies here, he will see Doom’s face, last.  Thing jokes that Thanos is attracted to Death’s cheekbones – there is a nice dark humor, with this series.

I also like how Gillen / Thanos recognize that he will have to really spell this out to Thing.  Doom is pretty petty, when it comes to his rivalry with Richards and his clan.   So it makes sense that there is only one Thing and he is tortured, every day – due to the siege attempts.  There is only one Human Torch, and he has to shine down, onto the planet.

Thing is told how Battleworld is real but it isn’t how t should be.  Which makes sense, what type of planet would have specific realms?  It isn’t like different states, each realm is like an entire planet, unto itself.  Thing should stop protecting this bastardize planet and start fighting for whatever it takes to restore a Doom-less order.

I do enjoy how the enlightened canon has “ENLIGHTENED!” sound effect!  That is all types of fun!  The heroes are using the canon to fight back the Marvel Zombies, including Zombie Wolverine. Zombie Magneto, and Zombie Spider-Man.

Kate Bishop, realizing that arrows are not going to have much of an effect on the living dead.  That she fights on, is what makes her a hero.

Thing materializes where the heroes are, he wants Leo to shoot the canon at him, so that he can answer the age old question – why are we here?  The canon is fueled by the Vitruvian Man, who is actually, Michelangelo, which I’m not sure if this is all in that SHIELD title from a few years ago.

Thing now knows that Thanos was right.  With a powerful right hook, he knocks Thanos down.  Thanos stands, easily breaks his chains and tells Thing that they must fight back.  I’m not sure if Thing has all of his old memories but he knows that his life, that he knew, is a lie.

Thing, in his proper miles long form, stands and leaves.  Miles of the shield are now gone and the rest will crumble, Brand’s War Journal informs.  Thing’s final words, to his friends, were a sound so loud, none could understand.  Not until, Eardevil the Klawyer broke it down, for human ears can hear.  Three words, five syllables.  “It’s Clobbering Time” which is so great.

Thanos tells Brand, Kang and Scott Summers – that he is also leaving to confront Doom.  Kang offers to change history but Brand reminds him that is how the one version of himself died, in issue two.  Things have to play out this way, so that Kang can live.  Kang still attempts it, so he will still die.

I like how Brand and Summers can be friends, on this world.  They started so hostile, back in the Proper Marvel Universe.

This really was a great title!  These Secret Wars 2015 tie-ins seem to be making a point of having fantastic final issues.