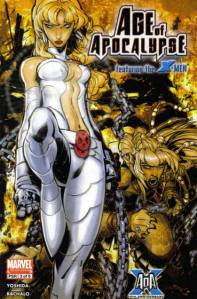 It took ten years but Bachalo has become the leader of an army of inkers. 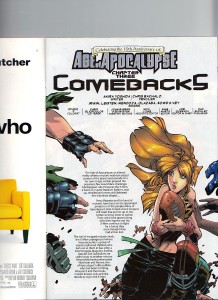 In the previous issues, Magneto and his X-Men are the protectors of the populace.  Their main mission is to hunt down the rest of Apocalypse’s goons.  The X-Men are no longer the ragtag group but are now a large team.

The X-Men have met a group of young mutants.  Magneto, Sunfire, Gambit and Quicksilver are on a separate mission.  Weapon X and a new mutant, Kirika have defeated Northstar & Aurora and are now on their way to rejoin the X-Men.

This issue opens with a classic X-Men playing football scene.  Weapon X and Silver Samurai let old scores surface but Storm tells them to calm down.  Like anytime anyone is told is clam down, it doesn’t work.  The two keep fighting as Kirika keeps trying to break it up and protect Weapon X.

After the game, the X-Men are watching news coverage of the Guthrie clan making a very public appearance.  Which will be the reason why I own this issue and the next.

The Guthries are Cannonball, Icarus and a blonde sister.  It can’t be Husk as she was part of Generation Next, and is believed dead.

Cannonball blasts Weapon X out of the fight and Kirika calls Weapon X “dad!” so that’s a thing now.  I’m pretty sure she’s suppose to be AoA’s X23.

The sister has the ability to grow to Giant Man height, if not bigger, so she’s a new one.  She’s able to make short work of this B-Team of X-Men.

Kurt teleports Dazzler up to the giant’s ear and she dazzles the giant.  Storm finally knocks her off of her large feet.

The Xavier Institute.  Monitor Room.  Xorn comes in to relief Rogue.  Xorn, who looks like a lady or a dude in a mask with long hair.  Xorn doesn’t like hearing that the Guthries are losing the fight and side kicks Rogue.  Xorn takes off her mask, and Rogue claims that she had died.  Xorn corrects her, it was more like “left to die.”

Meanwhile.  Cannonball is doing better in any fight that he would ever have against a Wolverine.  Weapon X tries to soak Cannonball but in the distraction, the Guthries all motor off.

The Mansion.  The B-Team comes home (it is what the giant Guthrie called them) and they get worried as clearly a fight broke out.  Storm asks where Rogue and Charles are.

With a “Welcome Home, X-Men.  Hope You’ll Survive the Experience.”  – 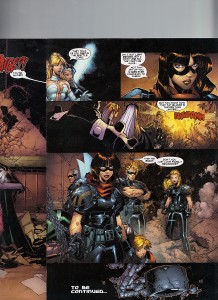 Husk is back and she is (rightfully) pissed!

Dazzler thought she died in the Seattle Core.  Husk has to correct yet another X-Fool, and state that she was left for dead.  She’s pretty upset that no X-Man ever came back, clearly years have gone by (maybe just the one) and someone should have gone to the Cores and check on them.