Looks like my posting schedule is the worst case scenario – Wednesday episode on Friday, Thursday on Saturday and probably Sunday on Tuesday.  I’ll be behind but I do feel like I go more in depth than the sites that I follow.

One team, Freakazoid, has to compete against each other.  The loser goes home, the remaining three has to decide which of them will be the first HoH of the season as well as nominate the first two houseguests.

The Freakazoids are – Nicole, Tiffany, Corey and Glenn.

Natalie’s is pretty great, most of the ladies good ones, actually.

Poor Nicole, they couldn’t get a more form fitting bikini for her?  They knew she’ll be in the house for a month or two.

Nicole has the same thought and forms an alliance with Corey.

The Comp!  Victor, the winner of the first comp, is the host.

They have to lay coconuts down and balance on their island, winners are the first three who can lift their flag after spelling SOS.  Loser goes home, hopefully Tiffany can’t figure it out.  She can’t even.  I predict it is Glenn going home, as I’m sure the houseguests are thinking that too.  They are hoping Nicole does but I don’t see it happening.

Nicole is the first to get her flag!  Two to go!

Shoot, Tiffany is safe too.  Down between Glenn and Corey.  Looks like both boyz lifted the flag at the same time.  Production decides it is . . . Corey!  So I can’t complain.  Was there not a better angle for Corey lifting his flag?

They are all three, so they are safe from being nominated from each other, which is an odd comment from Tiffany.  So she was thinking of nominating the two of them.  Nicole is trying to look not too eager.  Nicole is the first HoH! So all the Vets should be safe this week.

Corey has to defend himself against Paul, to explain why he allowed a Vet to be HoH.  Bridgette isn’t happy either.

Glenn is gone and I doubt anyone will remember him.

Nicole is hanging out with Paulie and James.  Nicole hasn’t forgotten that Cody voted her out of the house, twice!  Makes sense for the Vets to bring in both Tiffany and Paulie.

Victor tries to figure out Nicole’s game, he has some advice.  So awkward watching these two talk and play with their own hair.  Victor does throw Jozea under the bus, like an amateur.

The noobies experience Slop for the first time.  It is suppose to be like a bad oatmeal or those fitness protein mush.  The Half Not room has bumper cars for beds and flashing lights that don’t seem to turn off.  Not the worst thing.  Jozea doesn’t impress Da’Vonne much, as if she was Shania Twain.

Da’Vonne recommends Jozea to Nicole, who is all for it.

Nicole tells Corey about her pecking order – the Vets and her team.

Paulie looks pretty comfortable in the Vets alliance.  He’s all for putting up Jozea.  Paulie is okay with himself being nominated, as he’s an idiot – pawns go home all the time in Big Brother!

Nominations!  Looks like they are keeping the keys in the block gimmick.  It is a faster process.  Nicole has nominated – Jozea and Paulie!

Not a bad episode.

Here is Nicole’s Pool Side Image – 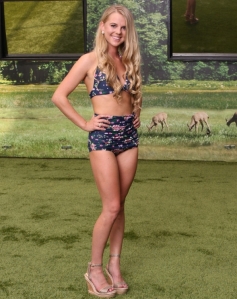 Her title sequence is pretty cute too.  Hopefully someone makes those gifs like in previous seasons.