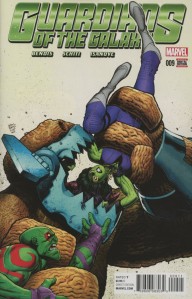 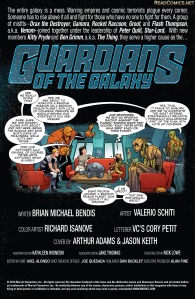 Yeah, I bought this comic because the recap has new dialogue but using old art, from issue one I believe.  The Guardians have some fun in the recap, hinting at what they would imagine will happen.  Pryde suspects that Quill will get himself captured, which of course does happen.  It is silly.

This is the Drax & Gamora, all green issue.  Is that racist?

Xalda-Volta.  Badoon Correctional Planet.  Dryston Tower.  The Warden’s High Tower.  The warden can’t believe eight people are successfully invading his prison planet.  I guess we have to find out why he doesn’t just press the self-destruct button, like what happened last time.

Drax and Gamora have taken the fight straight to the warden.  These two are the warriors of the group so they are going to enjoy this, the most.

Will we learn who they are going to save?  Drax and Gamora keep shouting that they want ‘her.’  The Badoon are green, so it is an all green issue!

Gamora wakes up and I had to flip back three pages to see if I missed something.  This must be how Gamora found out about the planet.  The She is definitely a former Guardian.  The She is in the same building that Gamora is in.  The chief torturer is Marud, and he’s mostly worried about Thanos coming here to avenge his adopted daughter.  It has to be Angela, right?  Are there other female members that were part of the team that are not Carol Danvers?

The Badoons plan on becoming the main force of the galaxy now that both Kree and Skrull empires are gone.  I guess the Shi’ar don’t want it.  Marud really wants to know where Thanos is, he’s been in hiding since Secret Wars 2015.  She’ll appear briefly in FCBD Civil War II.

Gamora doesn’t know where Thanos is, but she does know where the Black Vortex is.  Avengers Alliance got around to bringing it into their game for Special Operation 35.

We get what happened to Gamora after Black Vortex.  Every time she used her enhanced cosmic power, she lost it.  That’s how she’s normal again.  She hadn’t used the last of it, she’s been saving it for a special occasion.  This occasion.

Gamora has saved Angela, I knew it must be her!  I guess she’s available now that Queen of Hel has ended.  That’s a fast turn around.

I do like these two together, they were so much fun during the Guardians / X-Men crossover, Trial of Jean Grey – the main story wasn’t great but the Guardians part sure was.

Drax updates the two ladies, most of the pairs were successful but Quill got captured.  Angela is putting on her uniform.

I can’t wait for Pryde, Angela and Gamora to share some panel time together!