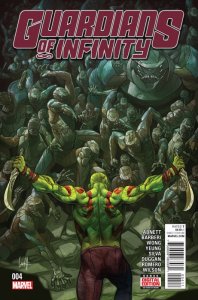 I’m still not sure if I should have bought this issue, even if Marvel Database says I should have.  We’ll get to that dialogue further down this post.

That’s right, another issue of this series that I just wanted the back up story for.

So, after Secret Wars 2015 – the world believes Reed and Sue are dead (or missing or something).  Johnny joined the Inhumans and Grimm joined Guardians – so one of them made out like a loon.  Then again, Johnny gets to bed Medusa, so that is a tad weird after his relationship with Crystal.

Johnny and Grimm apparently had a bad falling out.  Johnny borrowed a spaceship from Carol.  He got sandwiches from Tuliebitz, which is a made up sandwich place.

At a space station, Torch docks and reintroducs himself to Agent Venom.  Grimm is too upset (and angry) to meet Johnny – which really puts him in a bad light.  It took a few hours to get there and to go back, make the time.  I get that some Marvel editor wanted the first moment with these two Fantastic pals to share panel time together.

The Infamous Black Market of Oblitus.  Later.  Flash is showing Johnny around.  Flash tells Johnny that he is from Queens, and would like those sandwiches.  Flash is doing more than showing him around, they are on a mission together.

So the wording there in the fourth panel – “Star Lord’s message said something about a dangerous job.”  Then in the fifth panel, Venom says “A guy named Monlo got a message to Peter Quill.  I guess he’s one of Quill’s old fences.”

First, it is weird that Johnny gives that line of dialogue, right?  It should come from Venom, like it is explaining why they are there.  Why would the guest be telling the Guardian of the mission, clearly Venom told Torch about it, prior to arriving there.

The main thing is this though.  So is Torch using the out dated “Star Lord” title to refer to Quill, as Venom mentions Quill by name – as a subtle hint that Quill is no longer Star Lord, perhaps?  Or is the “Star Lord” Torch mentions, Kitty Pryde, and then Venom talks about how the message originally came Quill.  Which would make sense, Quill gets some news, he tells Kitty about it and she relays it to whoever is at the station.

I don’t know, it seems murky to me but then again, I do own this issue.

The shop keep, Monlo, use to sell items to Reed Richards.  They go into the store and find Monlo knocked out.  Some folks stole a space egg . . . that could destroy the universe!

Turns out the thieves were still in the store!  They are the Disavowed of Galadoria.  Johnny jumps into action, not caring about his flame fearing symbiote companion pal.  The symbiote bolts, leaving Flash awkwardly behind and Johnny totally uncooly freaks out at Flash’s lack of legs!

Agent Venom tries to match “Flame On” and Grimm’s multiple catch phrases with his lackluster “symbiote on!” It won’t catch on like Spider-Man’s “webs away!”

The Galadorians are defeated but not without exploding the cosmic egg on Johnny.  He freaks out until everyone leaves the scene then he burns off the gunk.  The two New Yorkers say their farewells.  Flash decides he will eat one of the sandwiches and gets a pie to the face!  Classic Torch being a jerk to Grimm action!  The worst!

Not a bad story, especially considering who the leads are.