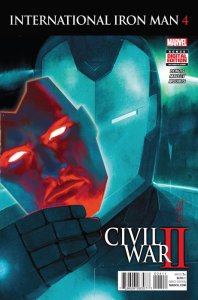 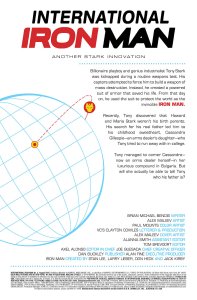 This is the Iron Man title wherein he is trying to figure out who his birth parents are.  Tony has caught up to childhood friend and current arms dealer, Cassandra Gillespie.  Apparently, her dad may have told her who Tony’s father really was.  Are there any golden age characters that could benefit from being placed back in the spotlight as Tony’s parents?  They will have to be, right?  Also, is Bendis’ reveal going to be who Kieron Gillan had in mind?

One Week Ago.  But First!  We have to do with the little matter of Tony trying to deal with the fallout of Civil War II’s first issue.  Yesterday was the Celestial attack and the after party.  Friday is his lady holographic assistant.  I like that Magik is getting some good press there, being on multiple news feeds.  Really, it was the magic empowered heroes who saved that day.

Tony wants Friday to do a search for who his biological parents are.

She’s been working on this search since Tony found out he was adopted – which would have been nice to have an editorial note stating which issue or trade I can find that information in.  A quick Google search reveals that was in Iron Man 17, that way way back in October 2013!  Such a long time to not pick up on that again.

Magik continues to be seen on the news coverage.

Tony asks Friday what she has discovered.

Bulgaria.  Iron Man lands in the country, on a playground it looks like.  I’m not sure why he didn’t go to the American Embassy.  Which is in Sofia, Bulgaria.

Iron Man has a fun little exchange with Anna, a nice elderly lady.  She can’t believe Tony Stark is in front of her, he asks what her name is and she says “Iron Man” as she is still processing it.  He makes a joke about how he’s been called Iron Man, as well, for years.  I like those little moments of levity.

He has come to the place where he was adopted from.  Does that mean he is Bulgarian?  That’s a big get for that country!  He had to personally come here as their files have not been digitized.  Tony is pretty sure someone took his file, most likely Howard Stark.  Which makes complete sense, he’s rich and doesn’t want people to know he is adopting a kid – for business reasons, I’m sure.

Tony mentions how only Howard would know about the adoption.  Anna corrects him, his birth parents knew as well.  Tony isn’t thinking clearly with this matter.

Auckland, New Zealand.  Twenty Years Ago.  I imagine that the beginning of this flashback was in the previous issue.  Cassandra and Tony are having a fight.  Hydra apparently attacked her family, Tony suspects to get at him.  Tony is running away from his parents, he thought she was running from her parents but they know where she is.  Always good to check in with your parents.  Cassandra wanted information about Howard, Tony doesn’t believe he ever mentioned him.  Cassandra corrects him, that’s all he ever talked about.

Cassandra, again, tells Tony that she loves him.  He doesn’t believe it.  Howard shows up in SHIELD flying cars of that era.  He doesn’t want the kids talking as Cassandra is a terrorist.  Howard brought good ol’ Dum Dum Dugan, who has a sniper rifle pointed at her head.  Howard is having SHIELD arrest her.  Tony keeps trying to get a word in but classic Howard is shutting Tony down.

Hydra planes fly in and start firing on the SHIELD cars and the Starks.  Cassandra runs away.  Hydra agents land and grabs Cassandra.  They open fire but Howard has a force field, so they are okay.

Bucharest.  Gillespie Compound.  Today.  We see current day Cassandra, who has an eye patch over her left eye.  Tony asks her who his biological father is.  She has a gun pointing at his head.  She reveals that her parents are dead, which surprises Tony.  I take it, he didn’t do any research on his old friend.

Cassandra can’t believe Tony isn’t asking her how she is still alive.  He goes right into the explanation of how clearly if she’s alive, she’s been working with Hydra.  He’s been in the costume slash armor business for a long time now.  He didn’t ask as it has nothing to do with the information he seeks.

Tony also knows that Cassandra has summoned Mandroids to their location.  Tony originally created Mandroids for SHIELD, I had to look it up.  I would have sworn they were AIM created and I was going to write how odd it is that a former Hydra agent now has AIM technology but that isn’t the case.  In three minutes, the Mandroids should be arriving.

Cassandra didn’t know Tony was adopted, I imagine most don’t.  She’s watched Tony’s superhero career unfold, expecting to run across him at any moment. It never happened.

Cassandra explains how silly it is that both Hydra and AIM are loud about their business practices.  She has carved out a corner of the arms market that her clients appreciate is very discrete.

Tony asks if she thinks about him as he thinks about her all the time.  I suspect he doesn’t but it is a nice thing to say.  Cassandra wonders if Tony really is adopted or if this is some bad intel that he has been given.  Which is a good point, I’m not sure of the actual story that revealed that he was adopted.  How did that information come out?

Issue ends with the Mandriods arriving.  Cassandra can’t let Tony leave as it will hurt her reputation.  I suspect he makes it out of there alive.