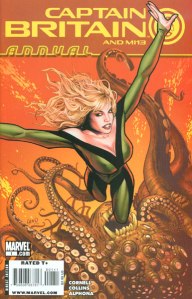 This issue has two stories :

The Harrowing of Hell

Inside Front Cover is an ad for Honda Insight.  So once people were done reading this issue, they went out and bought one of these.  Or maybe they open the cover and just threw the comic onto the ground.

After House of M, Meggan is stuck in Hell.  Her last name is Puceanu, apparently.

Cornell use to write for Doctor Who, so when Meggan – as a young lady – watched the show, she would shift into the creature.  Though I don’t recognize the one she becomes and the Internet is really letting me down on this too.  Like a greyish creature.

I like the glimpses of her origin via pages on the left.  A little jarring once the story picks up speed but I like them.  Especially the one with Excalibur! 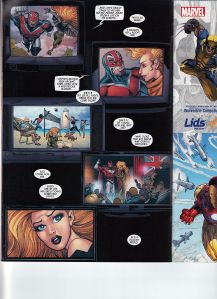 Meggan isn’t being burned and she feels like she should be punished but she doesn’t feel like she is.

She meets the rules of Hell – a green fellow, Dormammu, Mephisto, Hela and Blackheart.  If Dormammu is there then Magik should really be there too!

Dormammu tricks Meggan into tapping into Hell and seeing what it feels like and once she does, she looks like a mess up Swamp Thing.

She runs away and eventually gets an army around her and finds Pluto, who was also missing from the table.  He gives her the power to shift again and she is now back to looking like her regular self but in a nice white dress.

Now empowered, she really starts building an army.  Spreading hope wherever she goes.

The army starts calling her, Gloriana, and this becomes her superhero name, it only took her from 1988 to 2009 – almost 21 years!  That’s from Excalibur’s very first issue but she predates that but that’s when I met her.

There is another car ad, Kia’s Soul – oh brother!

At the end, Meggan finds the source of the moonlight that has been giving her hope and she walks into and … is saved by Doctor Doom!

This story will continue in issue 14 of the series.

There is an ad for Batman Arkham Asylum, and for the PS3 – you got to play as Joker – and it was awesome!  There is also an ad for Wolverine Origins Uncaged, another great video game!  2009 gave us two superb games!

Brian is thinking of Meggan while the rest of the team (and him) are playing Cricket.

I really like seeing Meggan through Brian’s eyes.  He is always trying to make her stand up for herself and make her own decisions.

I forgot how sexual Meggan was!  She’s pretty aggressive sometimes!

Eventually, Brian thinks back to his Excalibur days – so we get to see Kitty!  I imagine Rachel is the other pair of lady legs. 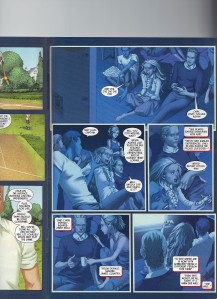 Pete Wisdom makes an awesome joke about how Brian’s hero name should be Swan.  It is due to how Brian is calm on the outside but working like hell underneath.  Also, he mates for life.

I like the flashback to Brian and Meggan when they first became the rulers of Otherworld.  I would follow that more but unless they mention Excalibur, I don’t really follow the characters.