Return of the King, Part Five of Seven

Rainbow Falls Generation Plant, Miami.  The Nuclear Plant that Magneto set into motion to explode, has started to do just that. 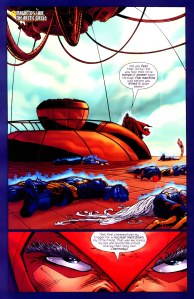 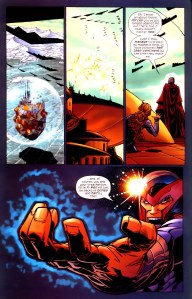 Poor Kitty, phases back to the main room to find out that she saved the world but not a city or a coast of America.  One has to find her victories where one can.

Magneto turns his attention to Wolverine, whose skeleton is full of metal, so he can have as much fun torturing someone before the military breaks through his defenses.  The other X-Men just have their fillings and belt buckles, which can be fun but Magneto wants to do maximize his time.

Which, really, at this point, shouldn’t the X-Men not have metal in their belt buckles?  I mean, during Millar’s run of Ultimate X-Men, Magneto has been a constant threat.  Other things happened, like the introduction of Kitty and the Hellfire Saga and the concept of the Phoenix, but Magneto has been the common threat.

I was going to wait until the next issue to go on about how Mark Millar started this series and stayed with the title for the first 33 issues, which is an impressive run.  I don’t own issue 33 – as Kitty doesn’t appear in it – so this issue and the next, are our only visits to the Mark Millar run, for the time being.

The next sequence with Colossus working up the confidence and just sheer being able to do it, crawls over to Magneto.  Magneto does taunt him that his metallic skin is within his ability to manipulate as well, which one would think torturing Colossus opens up some insane torturing techniques and visuals that torturing Wolverine, wouldn’t have.  But Wolverine is the bigger name and Magneto has history with Wolverine.  Magneto had hired Wolverine to infiltrate Xavier’s team and destroy it from within.  But Wolverine got the hots for Jean and that entire plan went out the window.

I have no idea as to why Magneto let Colossus get as close to him as he does as Colossus gets a double page splash to punch Magneto in the gut and from there, just unleashes on him.

Rainbow Falls Plant, Miami – three minutes after impact.  We see Xavier and Nightcrawler trying to evacuate as many people as possible.  It makes sense with how the issue is happening within real time (as much as one can expect) so Xavier wouldn’t have been able to move from Cuba to the Arctic Circle that fast.  Rogue is there too, good thing she is as she’s pretty crucial to the plan.  These three, and nameless others, are moving closer to the nuclear plant on the backs of Sentinels.

Arctic Circle.  The X-Men get it together to join in Colossus’ attack.  Cyclops wants to keep Magneto distracted and beaten, so that Jean can do her thing and give Magneto a complete mental makeover.

Magneto makes a reference to the film as he learn a very important lesson from the film – he rather die than be locked in a cage for the rest of his days. 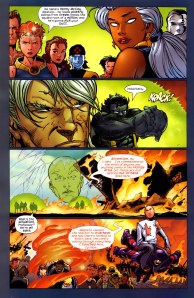 Just then, planes start crashing into the Citadel, Magneto’s defenses have dropped.  Luckily, Jean created two shields, one with the team in it and other with Magneto and Beast in it.

Jean tells Magneto that Beast is about to start giving him a beat down.

Xavier telepathically calls the team, as he needs some additional help to save Miami.  Iceman tries to come up with some plans but all of them require Nightcrawler teleporting to them.  Which would be fine but he teleports at a max of two miles at a time so by the time he got there and back, Miami and most people would be dead.

Rogue is trying her best to keep the radiation back, as much as she can.

Xavier tires of waiting for these children to come up with a plan and unblocks Jean’s crazy Phoenix persona (if I remember my Ultimate Jean / Phoenix history correctly – we will cover the Hellfire and Brimstone story, one of these days.

Jean flies straight to Maimi, lefts the ground under and around the Nuclear Plant and tosses it into the sun.  Well, we don’t see where she puts it after that but where else can it go?

Since Jean is not in the Arctic anymore and they can’t do anything else, Wolverine has an idea. 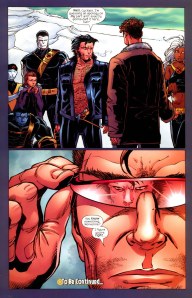 No, Wolverine, a simple apology from you will not make up for the fact that you left Cyclops to die so that you can bang his girlfriend.  Which, I’m not sure if those two got together after that, I want to say so.

In fact, I want to say that before Cyclops and Jean were even a couple, that Wolverine joins the team, and he and Jean quickly get it on and then he leaves.  Which gives Cyclops the opening to ask Jean out and that’s how things play out.

By the time Hellfire and Brimstone ends, Cyclops is left to die in the Savage Land, so that storyline ends with issue 24 and Cyclops doesn’t come back until 29, so I’m not sure what happens in the meantime.

When Ultimate X-Men was first coming out, in late 2002, I was only reading the trade – same for the Ultimates.  So I read those trades right when they were published, a few months after the final issue of the storyline came out.

Storm gives Cyclops, a backup pair of ruby quartz glasses.  I’m not sure if every member has an extra pair of those glasses for when Scott loses his or his visor, but that’s pretty smart planing.

Issue ends with Cyclops telling Wolverine that his apology (which, technically, Wolverine doesn’t do – he just talks of doing one) will not do.

I do plan on reviewing Mark Millar’s penultimate issue and then we are done with Miller’s Ultimate run for the time being.