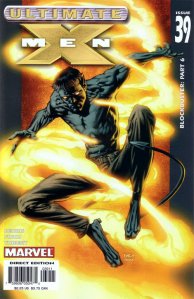 Jean wakes up in a meadow that has to be miles away from the mansion.

There is an ad for X-Men 2 coming to DVD. 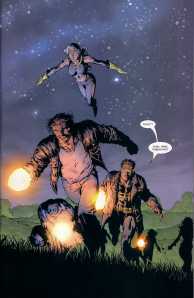 Kitty and the team are running to Jean.  Cyclops tries to comfort her.  I’m pretty sure that Bendis doesn’t get to write Kitty saying anything at all in these three issues.  Which is a shame.

Jean can’t believe she killed people.  Cyclops tries to console her that they were horrible bigots and maybe didn’t deserve to die but are dead and thus, life will be better now.

Xavier tells Nightcrawler to teleport Jean to the Mansion.  Xavier is going to make her feel better.

Nightcrawler gets back with the team.  Wolverine knows where the mercenaries are.  Nightcrawler wants to help as he has unfinished business with Weapon X.  Cyclops tells Wolverine that they all will go.  Which isn’t what Wolverine wanted in the first place, but it is what he is going to get.

I really like how thick Nightcrawler’s German accent is, as he pronounces words with a v instead of a w.  It is a small detail but it makes the character stand out.

The mercenary lady leader is being grilled via Skype (or whatever Skype was back in 2004).  They are cancelling the mission and letting the team go.  They have been, not only reckless, but careless.  They had gun fights in the middle of New York City, and people are going to figure out that something isn’t right.

To make the situation worst, now Wolverine has the support of the X-Men now too.

These mercenaries are silly and have no idea what is going on, on the larger stage.

She tries one last attempt, telling the guy that this is war.  He rebuts her with, yes and you are a casualty of it.  Which is another great line.  This ends their business arrangement.

Then begins the lead up to the conclusion of the storyline.

My favorite part of this is how the computers start to freeze and then we see the breaths of the mercenaries.  Very cinematic!

The X-Men come storming through the door.  Kitty isn’t seen on this page, which is a shame!

The lady leader lifts her gun and we see her take four shots.  I didn’t quite get the moment until the X-Men respond to it.  Storm tells Kitty not to look and it finally works for me.  She shot her teammates and then she killed herself.

Kitty’s “oh my” is technically Bendis writing Kitty Pryde.  I like how it is Storm who tells her not to look.  Trying to protect Kitty as much as she can.

Wolverine lets out a scream, in frustration. 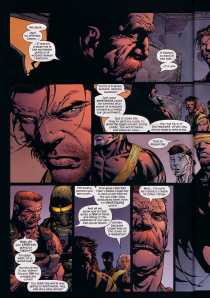 I like how once ORIGIN came out, everyone just started calling Wolverine, James – I tried to on certain message boards and was told to stop.  It was an easy way to show that these characters were either from Wolverine’s past or that they had secret information on him.  It did bug me that, of course, now they can call him James – but that’s just how sequential storytelling works.

I like Dugan in this scene.  He wants to do what Fury does and tell them national security and let that be what it.  But he wants to teach these kids that they are silly silly kids, playing adult games.  He tells them how, because they froze the computers, they can’t retrieve any information out of them.  Because they didn’t listen to Fury to stay at the school, these mercenaries are dead, so they can’t question them.

Which leads to a great moment of Cyclops telling Dugan that they were not given any such orders.  Dugan realizes, quickly, that Xavier and Fury have a communication issue.

Dugan reveals that there is clearly a conspiracy involving high ranked government officials, as the information they had could only come from those types of people.  Not sure where that story gets picked up later, if it does at all.

Before Dugan leaves, he tells the team how having Wolverine on the team and on covers of magazines, pushed some buttons and that they are going to have to deal with that.  Wolverine, not a good person.

Issue ends with Jean in her room.  She is having a conversation with someone.  I didn’t pick up on this the first read through, but it isn’t Scott as he comes in asking her who she is talking too.  Scott has brought her some food and Jean has to suffer in silence as she may be going crazy – again.

They look out her window to see Wolverine.  He’s all sad face and looking at a ring in the palm of his hand.  Was the lady mercenary telling the truth that she was his wife?  dun dun dun!

This is the final issue of Ultimate X-Men I got for Father’s Day from MileHighComics.com.