Two Doors Down and to the Right Tom DeFalco

Now this entire issue is a huge step up from the first one! 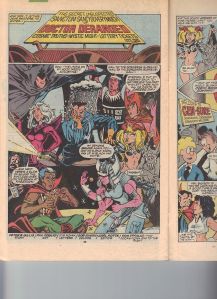 Story opens with Doctor Strange being harassed by the Marvel magical characters, including Magik.  Magik is upset as her demon is in black and white, which of course is Cerebus, by Dave Sim.  Which is a take off of how S’ym was her main demon henchman and he was a tall pink demon.  Its all connected!

This entire issue finally explains that if they are going to harpoon and parody other company’s characters, they have to the same with their own characters.

Doctor Strange teleports himself to the crossroads of between comic companies.

A sexy brunette with a white half shirt and fishnet stockings seduces Doctor Strange.  He follows her.  He steps first through a door and with that, he is stuck in the DC Universe!  Zantanna covers just enough of the log that maybe it is the BC universe?  She dons her proper outfit,

Next, Doctor Fate.  Good thing Access and Professor Xavier were not around or we could have gotten Doctor Strangefate!  One of the few Amalgam titles I kept, as it is one of the few comics that Access has appeared in.

Then, Deadman shows up.

The Spectre doesn’t care for this intruder here in the Distinguished Competition.  Before he can get rid of Strange, the Anti-Monitor also appears.

This new universe is too silly for Doctor Strange and he just leaves.  Unfortunately, he arrives in Pittsburgh right at the moment the New Universe is created.  uh oh

Other stories in the issue are :

Superbman vs Fantastical Four written and with art by John Byrne.  I’m sure the Inevitable Woman has never looked so good.  Byrne also, of course, draws an awesome Superman.

Wolverine with the X-Men, I like how the silly parody names from the previous issue are used again here.  Sort of this the universe What The exists in a feel that it is all connected within it.  Plus, I can only imagine how difficult and maddening it would be to keep coming up with different ways to spell their names.

The Doctor Strange story is the last of the four stories.