Thanks to this great website for most of the pictures :

Inside front cover ad is for Bill & Ted’s Excellent Video Game Adventure, on the NES.

Claremont brings his Iron Fist run into the X-Men.  That is why the X-Men are in San Francisco and at Misty Knight’s apartment.  Misty Knight of Misty Knight and Colleen Wing fame.

The X-Men start grilling the mysterious gal who is standing in Misty’s apartment.  The lady stands up for herself.

The lady looks familiar to Kitty. The lady is Harmony Young, a known fashion model.  Everyone wants to protect their identities, so codenames are being used.  Kitty is Sprite, at this point.  Once Kurt knows this, he lays on the charm pretty thick.  Wolverine doesn’t care and seeks beer.

Harmony finds the guys to be cute.  Kitty thinks to herself that Colossus isn’t cute. 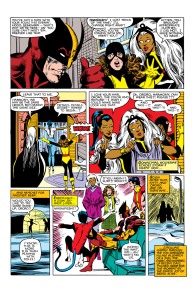 This is a good of a time to mention this : Sienkiewicz is doing traditional comic book art.  This is prior to the Paul Smith run, thus it is before the New Mutants.

I really like how he draws Wolverine in that top panel.

The X-Men are in town so Kitty can meet up with her parents.  She wants Storm to tag along.  Storm doesn’t have anything to wear.

In a great moment, Harmony offers Storm some of her clothes.  It is great because it sets up Storm to say – We may be the same height but not the same size.  Which is great as Storm isn’t a mere woman, she is a superhero and can’t wear normal clothes.

Rio Diablo.  Scott and Alex are spending some quality time.  Meanwhile, Corsair is hanging out with Polaris, as she makes dinner.

Back with the X-Men.  Kitty is home and calls to speak with Storm.  This shocks Kurt, as its been hours and no sign of Storm.

St. Vincent’s Hospital.  Storm is carted in.  She is described as – female, black, mid-twenties.  For some reason, I imagine she is in her early thirties along with Cyclops.  Maybe I just want all the X-Men to be 32 – which is still pretty young.  Right?  Right?

Logan and Colossus go to Storm’s room.  Poor Kurt has to stay outside, because of society.

Dr. Ohara informs them that Storm’s throat has been slashed.

Storm is on her feet and ready to go home.  The doctor doesn’t care and goes about getting the release forms.

At Misty’s apartment.  Storm is sent to bed.  She starts getting night sweats.

Sunday Afternoon.  Kitty returns to the X-Men.  The guys did not tell Kitty about Storm.  They wanted to let Kitty have a nice weekend with her folks.

Kitty runs to Storm’s window and opens the curtain.  The light burns Storm.

We get a great page of Storm and Kitty.  Storm has a new scarf with a D on it.  Kitty’s Star of David catches a light and Storm flinches.  Kitty, instead of punching Storm’s arm twice, leaves the room.  She is figuring it out.

We get the big reveal – Dracula bit Storm!  This is where Bloodstorm’s timeline starts over in the Mutant X Universe.  Also, where Kitty’s starts as well.  Such a good series.

Dracula goes into monologue mode.  Kitty, dressed as Indiana Jones, barges in with a cross in her hand and a stake in the other.

Dracula is taken back by the cross but notices that it doesn’t hurt him.

Kitty isn’t Christian, she’s Jewish.  Which is why there are no Vampires vs Jews movies – I guess.

Dracula grabs Kitty’s neck and burns his hand.  Good thing she always wears her Star of David.  Does she in the current comics?  I’m going to have to look for that.

In a brutal panel, Storm backhands Kitty and chases after Dracula.

The boys show up and Kitty tells them what is up.

Logan, like a jerk, doesn’t believe Kitty.  Kurt, from Bavaria, knows all about vampires – including Dracula.

Central Park.  The X-Men are taking the fight to Dracula.  Dracula sends rats and wild dogs towards the X-Men.

Kurt bypasses those and Dracula punches him to his face!  You can’t just skip the mid-level boss!

Colossus and Wolverine fight the dogs.  Once done, they attempt a fastball special, but Wolverine is thrown into mist.  Dracula, perhaps has as many powers as Superman?

Dracula throws Colossus through some trees.

Wolverine makes a cross with his claws.  Since Logan doesn’t believe in JC as his lord and savior, the weaponized cross means nothing.

Nightcrawler, on the other hand, super believes.  Is this the first sign of Kurt’s religious leadings?

Meanwhile, Kitty has worked her way into the weather station.  Kitty finds a coffin and begins working herself up so that she can kill Storm.  The coffin is empty and Kitty couldn’t be more relieved.  For good measure, Kitty pours holy water over the bed of the coffin.

Kitty is thrown backwards.  Storm is full vampire, teeth and all.  Kitty knows that Storm really can’t be a vampire, it hasn’t been three days.

Kitty prepares to stake Storm.  She can’t do it, and throws the stake down.

Storm was just fooling him.  Dracula turns into a bat and flies away.  Storm gives chase and keeps fighting him.

Dracula tries to use mind control over Storm, to force her to feast and kill.  She fights the urge.

Turns out, Dracula fancies Storm.  Doom was the first, Magneto will come later.  Doctor Octopus, will as well.

Storm rejoins the X-Men, she hugs a crying Kitty.

Issue ends with a phone call from Moira MacTaggert, Xavier has grown sicker and the X-Men need to come home.

I am hoping to review issue 64 next and then the issue after that is 107 and that will end the Father’s Day gift my wife got me from http://www.MileHighComics.com

Back cover ad is for the Marvel Universe Series II cards, that I read and reread numerous times.