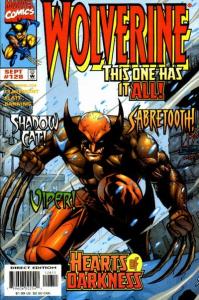 I wonder if something happened between issues 127 & 128, like did Claremont change his mind and was going to do more than four issues but decided to only do four?  It feels like two issues were skipped, at least one for sure. 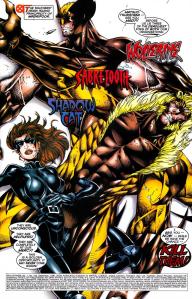 This issue starts with Wolverine, Shadowcat and Sabretooth already being taken prisoner by the combined forces of the Hand and Hydra.  Last issue ended with them about to make their attack, knowing it was a trap.  So we are definitely skipping scenes, and we are not given a flashback sequence so time is being saved here. 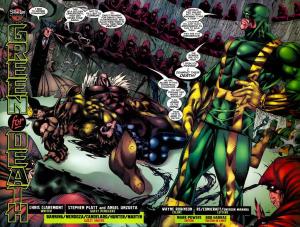 Hydra wants to just kill the three intruders but typical Hand wants to brainwash them.  Since the Hand is more involved in this mission, Hydra allows them to attempt to corrupt their souls. 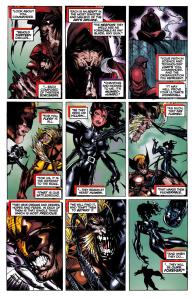 The Hand leader, Matsuo Tsurayaba – who has Logan’s very distinct hair style, points out to Hydra Commander how the Hand is more committed, manpower wise, to this operation.  I’m not sure how Kitty can be phased and unconscious.  Since Claremont is writing this that means Kitty’s natural state is to be phased so that’s probably the rationale.  Most other writers either don’t know that part of her history or just have her being in a traditional state of being.  The Hand plans on corrupting their souls and turning them into Hand agents. 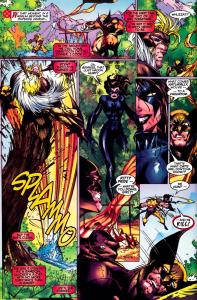 We see Kitty’s mindscape first.  This isn’t a bad outfit for her, except that besides the mask, it is essentially just a black unitard.  Kitty sees Logan and slits his throat, killing him (somehow).

There is an ad for Wesley Snipes’ first Blade film, the anti-Howard the Duck.  Such a good film. 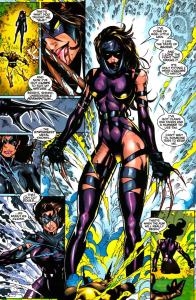 Now that Kitty is a killer, she shreds the one outfit into a new more appropriate one.  But shouldn’t it be red, or would it look too much like Elektra’s?  So instead, it is purple so it looks too much like Psylocke’s.  It could have stayed blue but still revealing and at least be in her color scheme, or black & yellow.

Dream Kitty has adamantium claws too but Sabretooth really has those and still didn’t kill Wolverine.

Hand and Hydra leaders are still bickering over the right course of action.  Hydra didn’t want to be part of this and this is exactly why.

We catch up to what Hydra is planning.  Just good old fashion brainwashing as they have – Viper, Tyger Tiger and Jessica Drew – all still in green.  So Tyger and Drew were taken after issue 125 and Viper after 126.  Viper and Drew are former agents of Hydra, so their brain patterns are already on file.

Thanks to editor Mark Powers, we learn that Tyger has extensive modification, as seen in Uncanny X-Men 229, Page 13, at the hands of Marauder, Pretty Boy.  I own issues 225 – 227 and then 230, so I’ll have to take his word for it.  I like having the page marked, that’s pretty handy.

Wolverine’s mindscape, is back to the days of the All New All Different X-Men, this is post Krakoa as Beast, Angel and Iceman are still around.  They turn on Wolverine and he has to fight for his life.

There is an ad for the upcoming X-Men 35th Anniversary – 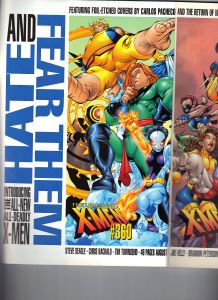 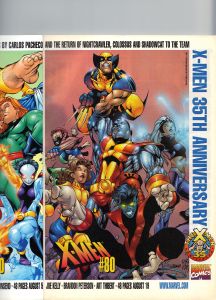 This was in 1998, my first San Diego Comic Con and I was obsessed with these images.  The printed ad includes Mutant X, which I was also nuts for.  I had asked the Marvel guy (I wish I knew his name) but he said I couldn’t have them.  If I was older, I would have offered to buy them, but I approached it like I was doing him a favor for not having to pack the big posters away.  I was 16 so I wasn’t thinking in a way to outsmart a grown adult.  My last SDCC was in 2004, when Spider-Man 2 was coming out.  I still remember seeing that footage of Doc Ock waking up and the arms going on a murder spree, I was so hyped for the film after that.  Still the best Spider-Man film, for my money though the costumes have gotten so much bigger since they moved to the white eyes for Spider-Man’s mask.

Jean is about to kill Logan when Sabretooth interrupts the sequence. 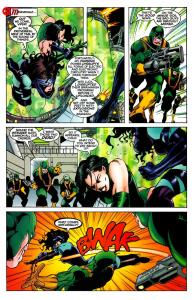 Meanwhile, Kitty saves Viper.  Kitty is in yet another outfit, she’s getting as good as Jan van Dyne.  Kitty isn’t holding anything back in this fight against Hydra.

Wolverine wakes up and Sabretooth agrees to save Kitty and Viper but not after they fight about it. 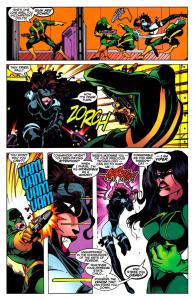 Kitty is in super killer mode, though she hasn’t killed any of these drones yet.  Viper knocks Kitty out, before Kitty can kill anyone.

Once Logan and Sabretooth are done fighting, though it mostly looks like odd hugging, but they’re just going through the paces.  Sabretooth is taken out by Tyger Tiger 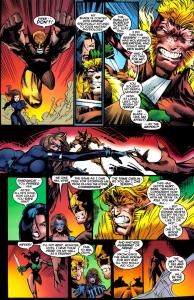 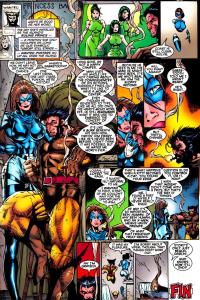 Issue ends with Kitty and Logan recapping the adventure.  They are wanted fugitives on Madripoor, and Logan & Viper are still married.

I believe that this whole time, Viper is being mind controlled by Ogun, but we’ll get to that in a later issue.

Next issue promises Wolverine against Wendigo, which I do own and will eventually review.

Happy eighth wedding anniversary to my wife and best friend! Thanks for the continued best years of me life.