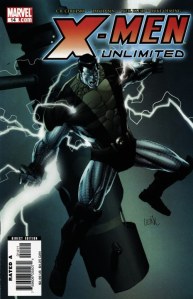 Before Magik came back, this was basically the type of story us fans had to hope for.

This story takes place soon after Colossus returned from the dead, and before Magik did.  He is visiting both of grave statues that the X-Men created.

Cebulski, I feel, is a super fan who got to write his favorite characters.

The flashback sequence is from right after the Mutant Massacre.  Magik wants to try to save the dead Morlocks.

There are two little continuity mishaps that took me out of the story for a page.  With only eleven pages, I had to bounce back quickly.  Colossus reverts back to his flesh form, but after the story, he was stuck in his steel form.  The other, Illyana mentions how calm Kitty is being, but how could she be calm as she is stuck in her phasing ability, and may never become solid again.

Magik realizes she can travel back in time to save the Morlocks.

Colossus makes comments about how final death is.  Even though the two Rasputin siblings know people who have died and returned from death.

Magik sees one of the Morlocks getting brutally murdered.  She realizes that death should be final.

Magik came back, has her brother promise to always be there for her.  Issue ends with him at her statue, asking for forgiveness – as even in death, he has left her alone.

How to be an Artist

Colossus is in an art class that is having a gallery showing that evening.  He can’t be inspired to paint anything.

Issue starts with a quote by Matisse, Creativity takes courage.

A classmate offers the advice to look back on his life for some pain and torment, as that is where the best inspiration comes from.

Which gives us our story as Colossus reviews his life and questions if he is an artist or warrior.

I like how Oeming, like most artists, has Colossus’ art being simple.  He is not meant to be an uncanny artist, it is a hobby he enjoys but he couldn’t make a living doing it.

Colossus thinks back to Serbia, how the harsh winters would cover the beauty of Mother Russia.  We get Oeming drawing a young Illyana, when she was happy.

I like the excellent observation that his torment didn’t start until he came to America.

How awesome is that drawing of Lockheed?

If you were going to paint an image of your (kid) sister, would you draw her with big ol’ boobs?

We also get recreations of Uncanny X-Men 137’s cover and Colossus’ sweet death.

There are a lot of preliminary drawings of Kitty, which I like, and it makes sense as they are together again.

Now that I think if it, every time we saw Kitty and Colossus together – outside of Astonishing X-Men – must have been between Danger and Torn, as Torn leads directly into Unstoppable.  Kitty doesn’t return from that story, so that must be the timeline. That is a lot of appearances squeezed between those stories.

Cyclops, Wolverine and Kitty are at the gallery with Colossus, as the story ends.  They like his painting – a warrior standing by a tree with no fight nor purpose.