I have part two on my Wishlist and I own part four but won’t be reviewing it next.

Inside front cover ad is for AvX 0, It’s Coming.

This whole arc is like a back door pilot for the second volume of X-Treme X-Men, which was like another failed Exiles attempt.

The Charles Xavier of this Alternate Earth, is young and has long blonde hair.  His X-Men killed Magneto.  He let the entire world read his mind and the world felt joy.  In Magneto’s last minutes, he cracked the world.  The brains of the Earth created a machine that sucks the power out of a mutant, killing them, but saving the planet.  For some time.

Savior’s Hold.  Santo Marco. Now.  The Savior is the blonde Xavier.  He needs the latest mutant to step into the machine.

One Mile Below Savior’s Hold.  The latest mutant?  Cyclops, of the Proper Marvel Universe.  He has made a few friends of some renegade X-Men –  Emmaline Frost, Kid Nightcrawler, General James Howlett and Shadow.

Xavier admits that they have killed so many of their own kind.  Cyclops starts optic blasting walls.

The other X-Men start waking up.  Emmaline admits that Xavier is stronger than her.  General Howlett has an adamatine-lace skull, the metal of gods, that keeps bad thoughts out.  That is a reference to his husband, Hercules. 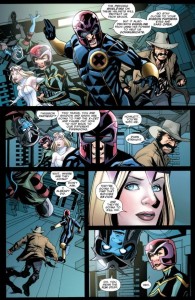 It is pretty easy to look bad arse in Magneto helmets.

Cyclops makes the teams.  Kid Nightcrawler, Shadow and Emmaline will be looking for the X-Jet and how to get him back home.  Cyclops and Howlett are the other team, they are going to kill Savior.

Once alone, Howlett explains to Cyclops that on his world, Scott is 19 and only Howlett has threaten to kill him.

There is an ad for Wolverine and the X-Men 6, with Intergalactic Gambling 101.  AvX is about to start.

Outside.  Kid Nightcrawler states he is a big Spider-Man fan, he calls Shadow “Spite” which isn’t her codename.

Emmeline does a first strike against Savior, which gives him a nose bleed.  He counters and she nearly passes out, he is a hundred times stronger than her.  He reads her mind and knows what their plan is.  He instructs Storm to defend the X-Jet.  As she flies off towards the X-Jet which frees up the bunker that they needed to go to.

Kid Nightcrawler teleports in front of Storm, she doesn’t care until Shadow pops out through him and attacks Storm.  Kid Nightcrawler calls her Sprite one too many times, she tells him her name is Shadow and to head towards the bunker.  Storm lightning strikes Shadow and carries her off the battlefield.  Storm lands in front of Savior, Cyclops optic blasts her.  Howlett stabs Savior to his left arm, seems like a waste of a move.

Storm has Savior open her mind to Cyclops.  Storm spends most of her time thinking of the people who died from Magneto’s last attempt at justice.  She also remembers all of the heroes who sacrificed their lives to keep this Earth alive.

There is an ad for Circle of Four, starring Ghost Rider (sinner), X23 (slayer), Red Hulk (savage) and Venom (soldier), I guess those four have some commonalities.

Back cover ad is for the Honda Civic, with a luchador, so that should sell a few cars.