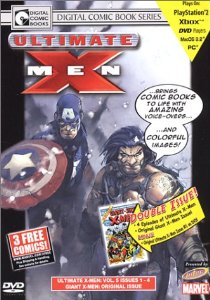 I really like seeing Bachalo’s art in quasi-motion.  We get all four issues of the miniseries here.  As well as X-Men 1 (the comic that started it all way back in 1963!) and Giant Size X-Men 1 that gave the X-Men a new lease on life.

The worst part of this is Ken O’Brien as the voice of Iceman.  Not as bad here as he isn’t a main part of it but X-Men 1, ooof, that is hard to listen too.

I’ll go into the individual issues once I review the actual comics but as a DVD, this is a good story.  The story is that Magneto has escaped and this is worst as the world thought he was dead but instead, Xavier just tricked everybody with his disgusting mind powers in believing that so the world’s guard was down.  SHIELD has the Ultimates go after the X-Men as they are as bad as Magneto’s crew.

I don’t own issue one as Kitty doesn’t appear in it so the entire first part was a surprised.  I had read it in the trade version (as that’s how I was reading Ultimate X-Men for the first ten or so trades until I started buying back issues) but that was a while ago.

I wish there was more to this collection but the run stops here, the first five trades were converted to motion comic.

I’m not sure why they went with solely Ultimate X-Men and not bothered with Ultimate Spider-Man as I would have bought those as they were being released.

This DVD came out in October 12, 2004 – so the first one would have been out to tie in with the X2 at the time. Though Spider-Man 2 was around that same time but who knows why they went one direction and not the other.