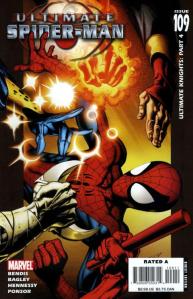 So after taking a detour with the reviews that I wanted to do after Ultimate Spider-Man 200, I went and checked all of the issues of Ultimate Spider-Man, with various volumes and such, to see if Kitty Pryde is referenced in any issues that I don’t own.  Turns out, Kingpin mentions her name in this issue, lucky for me, this was still in my Lonestar Comics To Sell comic boxes, so I was able to take it out and not add yet another comic to my Wishlist.  Which I had to do for Ultimate Spider-Man Volume Two Issue 15.  I did check Miles’ two series as well.  She has yet to appear in any of his solo titles.

So after this, I will get back to my Christmas 2014 comics.

I reviewed issue one of this storyline during Daredevil Month (April 2015) and now I’m reviewing part four.  I’ll get to parts two and three, at some point, and I don’t own the concluding chapter.

Okay, onto the issue!

Matt Murdock, while in a courtroom, overhears a radio announcement that Midtown High School has become another site of a super powered showdown.

One of the main scenes of this issue, and I really dig it, is a conversation between Kingpin and Spider-Man, who is unmasked.  This is Bendis at his very best.

Spider-Man wakes up to Kingpin holding an action figure of his.  This starts essentially a seven page monologue of Kingpin’s.  Kingpin wonders if Spider-Man is a mutant.  He still doesn’t know who Spider-Man really is, he was tempted to run his fingerprints but he knows that he is on Nick Fury’s watchlist.  If he ran his fingerprints, within five minutes, the Ultimates would be crashing through his window.

Kingpin wonders why Spider-Man isn’t on the Ultimates.  All he really cares about, is that this kid is Spider-Man.  He does know which high school he attends, so if he ever needs to find him, he easily can.  While talking to him, he starts hitting him with his action figure – which is pretty funny.  Kingpin threatens to blow up his high school.

Spider-Man is a teenager, so he may not care about his school.  Kingpin then steps too far and threatens to blow up the Xavier School of Mutants.  It is amazing that Spider-Man can stay silent for all of this, but he probably is feeling bombarded by all of this information.  Clearly, Kingpin has this entire speech rehearsed.

Kingpin knows that Spider-Man is dating Kitty Pryde, the X-Men’s Shadowcat.  He knows this due to the Internet.  Man, I would really like to see how quickly Kingpin tries to take on the X-Men and be handed his large ass to him.  Lard ass, look at me making jokes.

Kingpin mentions now they have something in common.  Spider-Man knows where Kingpin works and he now knows where he goes to school, he can get in touch with Spider-Man, whenever he needs to.  Kingpin starts making counter arguments.  One day, Spider-Man may reveal who he really is to the world – when that happens, Kingpin will know exactly who his parents are.  Kingpin could easily kill Spider-Man, right now.

Kingpin rather not kill him, as he owns a parent company that owns the license rights to Spider-Man.  He is going to flood the market with Spider-Merchandise.  So killing Spider-Man, is bad business.  Spider-Man can try to stop Kingpin’s criminal campaigns but Kingpin is making crazy amounts of profit off of Spider-Man.  Anytime he does something good, Fisk is making money.  Legitimate money.  Kingpin repeats, several times, that he owns Spider-Man.

Kingpin gets to the point, he wants Spider-Man to go back to his vigilante knights pals and tell them to stop coming after him.

Kingpin starts punching the assassin that he sent to Midtown High to capture Spider-Man.  He knows that this is yet another identity of Moon Knight’s.  He tells Moon Knight, in a Ronin style outfit – the Ronin that Echo and Hawkeye later wore.  Kingpin reveals that Matt Murdock, Daredevil, works for him.  Murdock is his lawyer.

The Knights are playing a game, that Kingpin invented – which is a very cool thing to say.  If the Knights keep coming after him, Kingpin will beat them all like he is doing to Moon Knight.

If Peter decided to stop being Spider-Man, Wilson Fisk will just simply hire someone to be Spider-Man.  I really like the idea of how Spider-Man has brought Peter no benefits but now, Kinpin is making loads of profits.

Meanwhile, Daredevil crashes through a window.  He is investigating an office.  He finds something and calls Doctor Strange.  Wong answers the phone and states that Strange is in deep mediating, which is code for sex time.

Doctor Strange teleports to where Daredevil is.  Daredevil is the leader of the Knights.  Strange recognizes the office as belong to the Kingpin.  Ultimate Doctor Strange is sort of a celebrity, who appears on talk shows.  I like how neither Daredevil nor Strange knows how each other’s powers work.  Doctor Strange casts a spell and can follow the trace that Daredevil senses.  He creates an image for him (and us) to see but Daredevil can’t see it.

Moon Knight wasn’t working according to the plan, he went rogue.  Maybe they shouldn’t have let a mentally unbalance person lose on his own.

Strange wonders why no one is on this floor.  Daredevil reveals that this Kingpin’s personal floor, the only people who work on the floor are related to his criminal empire.  That way, he doesn’t have to worry about the wrong people eavesdropping.  Daredevil has been working on bringing down Kingpin, for a very long time.

The two heroes go down an elevator shaft.  Strange isn’t happy that his cloak got filthy.  The trail leads to a giant door and Daredevil can’t sense what is behind it.  Strange can’t teleport inside as, like Nightcrawler, he needs to be able to know w hat is inside so he doesn’t merge with a desk.  They go into the room, the door wasn’t lock and it appears no one has been there for a while.  This is the room that the Kingpin / Spider-Man conversation occurred in.  Daredevil wants to get the Knights together.

Daredevil, Shang Chi, Iron Fist and Doctor Strange are on a rooftop.  Daredevil wants to locate Spider-Man but no one knows how to do that.  Daredevil tells everyone that he is Catholic.  Iron Fist isn’t surprised that Moon Knight went a tad crazy, he is dressed as the moon, after all.  Just then, Daredevil gets some webbing to his face.

Spider-Man starts wailing on Daredevil.  He keeps calling Daredevil names and he is disgusted with him.  Daredevil is clearly outmatched by an angry Spider-Man.

Daredevil takes off his mask, that way he is free of the webbing.  He gets Spider-Man to calm down enough to explain himself.  He tells Daredevil that he knows that Murdock works for Fisk.  Daredevil really don’t know what is happening.  Daredevil is very surprised that Kingpin knows his real name and his profession.  Spider-Man isn’t buying this mock confusion.

Just then, Murdock’s law office is blown up.  It is what all Kingpins do to Daredevils.  Murdock doesn’t care, no one was working this late at night and he isn’t going to give Kingpin the satisfaction of running around the debris.

Daredevil reveals that Kingpin killed his father, all because he wouldn’t throw a boxing match.  Before he dies, he wants to make sure that the Kingpin has been dethroned.  Sadly, he will die before Kingpin does.  Murdock doesn’t want to kill the Kingpin, he wants to bring him into a courtroom and have the system take him down.  He feels like he is so above the law, that he needs to see how it officially works.

Somehow Kingpin figured out who Daredevil is.  He poses the question and instantly hears a heartbeat spike.  He starts choking Iron Fist, as he is the mole on the team, which is how the issue ends.

Daredevil dies in Ultimatum (actually in an issue of Ultimate Spider-Man, 131) and Kingpin is killed by Ultimate Mysterio, in his rise of power, in Ultimate Spider-Man Volume Two Issue 1, so the issue right after Ultiatmum ends, so he doesn’t live in a Daredevil-less world for long.