This is Marvel’s first Swimsuit Issue, so they try to match a Sports Illustrated Swimsuit Special.  The four that follow (and I own them all as Kitty Pryde is in each one) are simply characters in swimsuits.

We’re reviewing this issue today, as we lost Paul Ryan this day, a year ago.

Special thanks to Le Messor, from the Comics Should Be Good post memorializing Paul Ryan’s death –

Without his help, I wouldn’t have known which pages Paul Ryan contributed nor who drew the Dazzler feature.

This issue has ads and features, which is pretty fun. 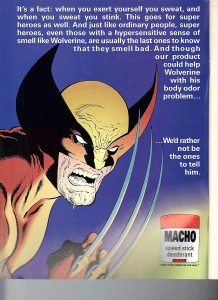 The photo shoot took place in the Savage Land.

Northstar gets an interview

Wonder Man gets an ad for underware

Super Olympics is a feature

Beast gets an ad for shampoo, Ultra-X

She-Hulk gets a workout feature

Silver Surfer gets a feature

John Bogdanove and Stan Drake’s art is featured in the Rockin’ in the Stone Age.

Reed Richards gets an ad for Kronex Watches

Quicksilver gets an ad for Spike shoes

Marc Silvestri gets to draw the X-Ladies and Lockheed!  Major points for Lockheed  and Kitty Pryde sharing the same swimsuit pattern.  Other ladies present are – Storm, Jean Grey, Rogue, Rachel, Psylocke and Dazzler.

Hercules gets an ad for Atomi-Flex. 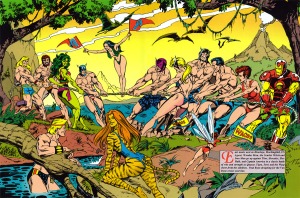 Ben Grimm gets a feature

Matt Murdock gets the final feature, written by Ben Urich

Namor gets the inside back cover for his company, Oracle

Thor gets the back cover ad for Flic Disposables

For $3.95, pretty impressive that there are no real ads.