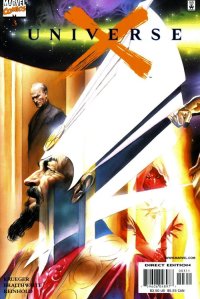 I really enjoyed the Earth X series and then dropped out of Universe X and the concluding, Paradise X of this trilogy.  When I looked up the issue on the Marvel Database and saw that both Magik and Kitty are referenced in this issue – which I knew, but I clicked on their name links to see if I had all of their appearances.  I had to add issues 0 & 4 of Paradise X and Universe X : 4 Special (spotlighting the Fantastic Four).

I was e-mailing Krueger back and forth as Earth X was being released, as that series had various quotes at the end of the title and he provided his e-mail and I thought I would take a chance on learning more about the quotes.  A great deal of research went into making Earth X – which was sort of like Marvel’s Kingdom Come, especially with Alex Ross’ involvement and how both series take place in a possible future.   I do recall there being an issue when Joe Quesada and Bill Jemas took over Marvel and how this series was more like the old Marvel that those two were getting away from.  My memory is that there were more plans for the Earth X universe but they were haltered and they may have had to fight for Paradise X.  Which I can see it being far more continuity heavy for their New Readers mission statement.  I tried to do a quick Google search and couldn’t find any articles so maybe I’m misremembering a Wizard article.

Inside front cover ad is for the amazing first Activision Spider-Man game for the original PlayStation, I loved that game so much!

On the credits page, we get a text conversation between Kyle and Isaac – hopefully we learn their identities throughout this issue.  This was how Earth X started every issue with Machine Man and Uatu the Watcher having a conversation that sets up the issue.  This time, Isaac is done talking about mutants.  Kyle mentions how through mutants, the devil will come.  Which seems harsh, at the offset.

Issue opens with a recap of the Savage Land, Ka-zar, Shanna and Belasco. 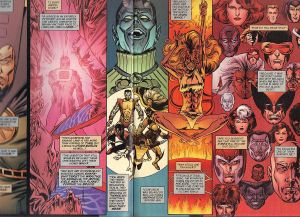 This segues into Belasco and his X-Men history, which of course, invovles Magik.

In the present, Black Knight has declared that he will not be the Inhuman King.  Luna, will not be his wife and Medusa is not happy at all.

Captain Britain (or King Britain?) is talking to Steve Rogers, it has been three years since Earth X ended.

There is an ad for Spawn coming to TBS, what an odd thing to promote?  Hopefully people bought the issue in a timely fashion to take advantage of watching it on October 29 @ 8:00pm, a Sunday night.  I feel bad that it only promotes starring Martin Sheen and John Leguizama.  Poor Michael Jai White gets left off.  Also, Todd McFarlane was available to chat on TBSsuperstation.com Wednesday, October 25 @ 7pm.

Steve Rogers and a boy Mar-vell is in the Savage Land.  Ka-Zar is dead, but Zabu is alive and walks like a man.  They are lead to the Master of the Savage Land, Magneto’s old kingdom.  Turns out, Magneto – in a Toad style outfit, is not the fool and Toad is the master.

Toad gives permission for Zabu to lead Rogers and Mar-vell to the portal that goes to Limbo.  Once their, they see that everything is frozen over.  There are a slew of references to how Limbo is Hell.

They are attacked by demons.  The demons are really Dire Wraiths (as in the Earth X timeline, everything is two things – sort of like Once Upon A Time) and the heroes are saved.  The awesome thing is that they are saved by legendary ROM!  Who Marvel doesn’t own the name of, so Rogers has to call him “the greatest of the space knights” so we know it is ROM in human form.  I’m not sure why Marvel can’t just reprint all of those issues but with this character.  Probably because it would be a little too in the face of the current owners, Parker Brothers.

Mephisto appears before the gathered heroes.

We cut to the Realm of the Dead.  The heroes here are -Iron Man, Jean Grey, Doctor Druid and an adult Mar-vell.  Also there is Thanos, who must be happy to be in his lady love’s realm.

Limbo.  Mephisto wants to make a deal with Rogers, but to shut him down, he throws his mighty shield at the statue of Belasco.  This is exactly what Mephisto thought would happen and now Rogers has unleashed Belasco to the past to repeat the cycle of history.

Issue ends with Rogers and Mar-vell having to make a new plan.

The ending quote is “The devil is good when he is pleased.” by John Clarke.