Posted by John Klein III on March 15, 2017
Posted in: Review. Tagged: Corvese, Lobdell, Tyler - Rurik, What The. Leave a comment 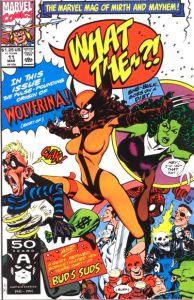 I like the joke about what does, Auld Lang Syne, even mean.  It is also the title of this story.

New York City.  New Year’s Eve, 1991.  There is a giant party at Bud’s Sud, the after hours club for both heroes and villains.

In a vent overlooking the party, Mister Hyde plans on dropping a bomb on the party guests.  Once they are dead, he will be the master of the world.

Wolverina is going around getting people’s drink orders.

Thanos and Death are dancing, his name here in Thighnos.

USAgent (USAJerk) talks to the bartender slash owner, Bud, and he is crying about how 15 years ago, his wife left him and took his baby girl with her.

The New Warriors walk in like they own the place, they are hot shots now that their title is super popular.

Uatu the Watcher feels torn, as he knows who Bud’s daughter is, but his vow of non-interference forbids him.  Death says there are other ways to get the secret across. 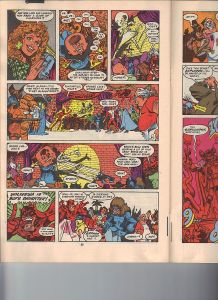 Uatu offers up a game of charades.  People keep calling him, What-Iffer, his category is “Secrets You Shouldn’t Tell” – pretty handy!

Shadowcat is guessing better than anyone in attendance.

Daredevil (Duh Devil) shouts that Wolverina is Bud’s daughter – who does not look like she is 15 years old.  I guess they were married for five years and then she left him – yeah, that must be it.

Daredevil comments on how could he have been so blind to have missed the connections, then he asks if everyone is staring at him.

Bud makes Wolverina a partner of the bar.  As they enter the office, they see Hyde in the possess of disposing of the bomb.  Wolverina begins fighting him, to get the bomb.  She grabs it and starts heading upstairs to the roof.

So much fun, having Vision, Shadowcat and Red Ghost phasing up through the ground and only seeing their eyes and the tops of their heads.

Bud is worried about replacing his bar.  Hank Pym has a miniature replica of the bar and can enlarge it so that there will be no damage.

Story ends with all of the characters proclaiming, Happy New Year!

This is the last story of the issue.  The rest of the stories are :

Daredevil in “It’s Not Such a Wonderful Life”

What Is Your New Years Resolution? with various characters

She-Hulk in “This Man, This Meal”

Hazards of Being a Super-Hero, also with various characters.