Cover by Steve Lightle, which doesn’t compare to Cockrum’s original.  Why is Angel on the cover?  He isn’t part of the away team.

Issue opens with Doctor Doom looking out the window of his upstate New York castle, as the weather turns violent.  This is due to him locking Storm into a body forming metal casing.  Arcade is surprised that Doom hasn’t killed the X-Men.  Doom doesn’t know the X-Men at this point, so he wants to test them.  These tests seem to very Arcade-esque.  Nightcrawler is in a doorless and windowless room.  Colossus is on top of a mountain that has a raising deadly whirlpool.  Wolverine is in a chess squared room that throws his senses off.  Angel is in a giant room with a perch, whenever he flies off of the perch, lasers – set to stun – fire at him.

West indies.  Scott and Lee Forrester are on a mysterious island and care having to deal with the repercussions of the violent storm.  Scott trips over a tree, and loses his make-shift bandage and optic blasts the ocean.  This throws Lee off but also explains why Scott has been so weird about the bandage.

Half-a-dozen hours ago, New York City.  The B-Team – Polaris, Havok, Iceman and Banshee – are on their way to save the X-Men’s (and theirs) family members.  Banshee notices that Polaris got a new uniform, I don’t care for it.  She mentions how it is insulated.

They fall into a few chutes that lead them to Murderworld.  Each chute takes a member to a different room.  We check in on Miss Locke and see that she has the family members in giant gift boxes.  She went all the way to Russia to get little Illyana!  Other hostages are – Amanda Sefton, Elaine and John Grey (I had to look up who they were suppose to be), Moria MacTaggert, Candy Southern and Stevie Hunter.

Havok is in a space quest.  Iceman is fighting some androids on ice skates.

Polaris is at a fairground, chasing Illyana. 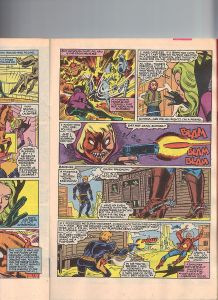 Turns out, Illyana is a robot and tries to kill Polaris.  Lousy robots!

Banshee, in a pretty cool outfit, is in a Western adventure. 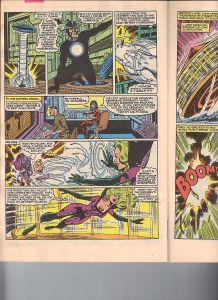 Havok gets out of his scenario first and is the closest to Miss Locke now.  Polaris destroys the Illyana robot.

Banshee’s adventure includes Moira, Candy and Amanda, all damsels in distress.  Iceman and Polaris join up with Banshee.  Moira explodes as Polaris forgot to tell them about the robot family members. 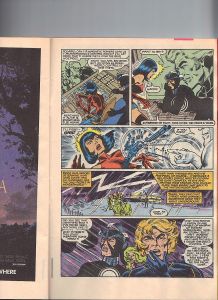 Havok gets to Miss Locke and knocks her out.  Illyana is one of those peeps on the outside, heading towards the airplane.  Everyone notices the horrible weather.

Issue ends with Arcade laughing at Doom, as Nightcrawler has escaped.

I had bought X-Men Classic 51, as I own Uncanny X-Men 147 (which 51 reprints) but turns out, no Illyana and no Kitty mentions.  I’m keeping my copy of 147, as Kitty is in the character box but not in the character box of the next issue so that goes back on my Lonestar To Sell list.