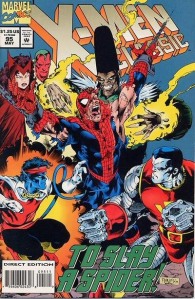 Cover Tom Raney and Hilary Barta, much better than the original with Vision and Colossus punching each other, which isn’t half bad.

We conclude the horrible Kulan Gath, which really, isn’t that bad.

Issue opens with Spider-Man pretty much defeated, tied up and bleeding out, in front of Kulan Gath and his mind controlled heroes. 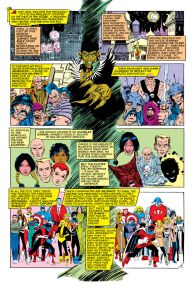 We get the recap page of what has been happening.  What I like seeing are the mirrored panels.  I wish the second to bottom row, matched the faces like how the bottom pair match placements.

I think Claremont does a great job of writing Spider-Man here.  We get his inner monologue of how he feels he may seriously lose everything in this fight, but he still cracks jokes.  He finally calls Kulah Gath on how he refers to him as, Man-Spider.  Someone had to finally say something.

Also a prisoner of Kulah Gath, is Selene, who is more defeated than I ever seen her.  This will be explained away later.

Dani Moonstar and Sunder arrive and give Kulah Gath the bad news, that they didn’t get the non-mind controlled heroes.  He ages both of them, turns them into stone and reverts them back.  It seems very painful.

This segues us to the rebels, lead by Captain America.  Illyana is counted as one of the rebels, as they team up with Maddie Pryor.

We get heroes on heroes in a fight.  Scarlet Witch attacks Colossus.  Magik cuts Colossus loose of the crimson bands of Cyttorak, something he will do again at the end of AvX.  This frees Colossus, so he can punch Vision, just like on the original cover of the issue.  This panel will be repeated later.

Rogue gets stabbed to the back by an s-word and dies. 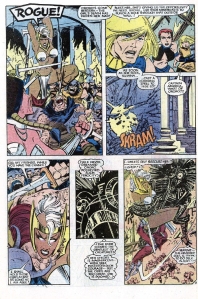 Storm freaks out and starts wailing on fools.  Captain America dares order Magik to teleport everybody away, she graciously agrees to do it.  Storm and Warlock stick behind to ensure that their rebel friends get away.

Once at their base, Magik calls Magma out for how she didn’t help them at all in the previous fight.  This makes Magma cry and this will also make sense later in the issue.

Captain America comes up with a plan of attack.  There will be two teams, Captain America leading the bulk of the heroes.  Maddie Pryor will lead the other, Nightcrawler, Magik and Callisto make this team, as they are stealth team.  Captain America’s crew are using the front door.  Pryor’s crew gets attack by some mind controlled folks, including Wolfsbane. 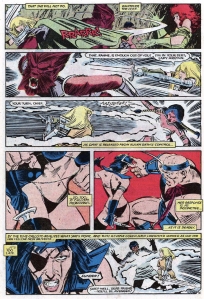 Throne Room.  Spider-Man is still just hanging about.  Colossus punches vision again, which is the image that does make up the original cover.  Vision phases his hands through Colossus and both explode.  Good thing everyone who dies is brought back at the end of the story!

Magik and the others show up to help Captain America’s team.

Cannonball frees Spider-Man from being crucified.  Storm and Warlock arrive and Magma starts acting a tad out of character.  She reveals that she was really Selene, the entire time and Kulah Gath was abusing Magma, earlier in the issue. 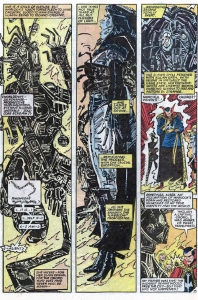 Warlock absorbs both Storm and Selene.  Doctor Strange is able to access all of his mystical might.  Warlock and Storm are a new entity now. 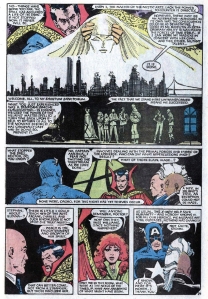 We get an awesome panel of Strange and Magik working together to set the world right again.  I bet when Magik was going back in time to train with Strange, that it takes place at least after this issue.

Issue ends with Nimrod on Earth.

Thanks to this great website for all but one image –