Issue opens with Nightcrawler waking up from a nightmare, wherein he was being burn at the stake.  I really enjoyed this issue and Grayson’s take on Kurt and having to use his image inducer.  This is the type of story this comic should have been filled it, stories that feel like they are in the X-Men Evolution universe, but character driven stories that – for whatever reason, wouldn’t make it onto the show.

Xavier Institute.  8am.  Scott wakes up Kurt, apparently, poor Scott, has to wake up everybody and keep them on a schedule.  Scott reminds Kurt that he needs to turn on his image inducer, as the world isn’t ready for blue mutants, just yet.  Which seems harsh, as he still has maybe twenty minutes where he can be his natural blue elf self.

Scott is trying to hurry Rogue along, it has to take so long to put all of that chalk white make up on.

Kurt asks the question that has always bugged me, Everybody calls Rogue, Rogue – even the teachers and fellow classmates at the school.  That doesn’t even make sense.  I guess, if that is her real name, that could work but ooof, that isn’t very good.  Scott uses the reasoning that Jean is Jean, at school and in battle.  At least, to Rogue’s credit, she is one of the half of the X-Ladies who have maintained her codenames.

Spyke, that idiot, almost runs down Kitty in the hall, on his skateboard.  He must not be aware of how much damage skateboards can cause in old buildings.

Jean sympathizes with Scott, as it can’t be easy to wrangle teenagers, especially in the morning.

Bayville High School.  8:25am.  Apparently, and I totally get this, most students don’t care for the Xavier Institute people.  Which makes total sense, as the X-Men (no matter the dimension) bring destruction wherever they go.

Kurt’s teacher, for the weekend, assigns homework – write what you can be at home, that you can’t be at school.

Danger Room.  Xavier Institute, 3:37pm.  The X-Men are having a training scenario.  At first, I thought it was a coloring error, but it isn’t.  Kurt is using his image inducer in the session, for some reason, he isn’t as agile as he is in his natural state.  The session wasn’t that successful.

Xavier tells his students that it is dinner time.  Kitty reveals she is a vegetarian, which isn’t that great.  At least, it isn’t my lifestyle.

Jean tries to cheer up Kurt.  Kurt tells Jean something that she never thought about.  How Jean is always trying to be perfect, for those who would consider her a role model.  This shakes Jean’s confidence but Scott is comforting when he tells her that is she up to the challenge.  As a reward, she touches his bare face with her gloveless hands.  Scott touches his own face, so that boy is super desperate for any physical contact. 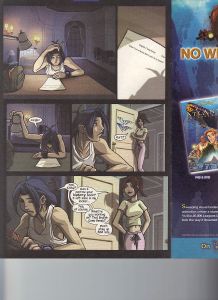 Kurt is struggling with his assignment.  We see on his sheet of paper, that today’s date (or Monday’s) is February 27, 2002.  I looked it up and it was a Wednesday, so the teacher is giving them plenty of time.

Kitty enters Kurt’s room, and there is a softness of her in these pages that makes me really like the coloring and art style of this issue.  Kitty wants to borrow Kurt’s history book.

There is an ad for Disney’s Atlantis, which is promoting Mike Mignola being the art inspiration for the film, so I should have known that a while ago instead of sometime last year.  The DVD came out in January 29, 2002 – which I still need to own this as we really want to get the boy centric Disney animated films for Walker Dennis. 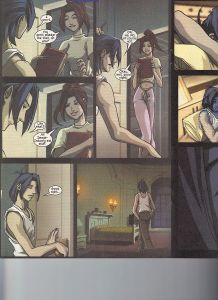 Kitty asks if Kurt sleeps with his image inducer turn on.  He says he doesn’t.  I’m surprised more Kurtty fans don’t seek this issue out, as they have two great scenes in this issue.

Kurt turns off his image inducer and has another nightmare, where in his butt naked and blue in front of his classmates. 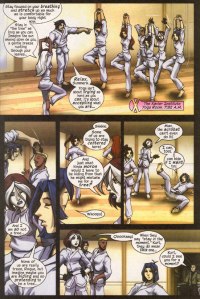 Xavier Institute.  Yoga Room, 7:32am.  Wolverine is getting everyone to get into a Tree stance.  Rogue can’t do it nor can Kurt.

Xavier calls Kurt over, he knows about his nightmares, as they are so powerful that Xavier can’t ignore them.

Because Xavier took all of this time, Kurt missed the ride to the school.  Kitty did too, but like that episode where she just wanted some alone time, I imagine she walks to school a bunch.  Grim Reminder, 1×11, one of my favorite episodes.

Kitty shares with Kurt, that at first, she enjoyed being at school more than being at the Institute.  Her intelligence makes her stand out at school but at home, she is just another mutant with powers.

A slew of flatscans with rape intentions start harassing Kitty.  Kurt keeps telling her to run.  For some reason, she doesn’t decide to kick their butts.

Instead, Kurt turns blue and scares them away, which devastates him.

Kitty thanks Kurt but he is having a hard time accepting that his blue self is only good for scaring fools.

Kitty thinks Kurt is the good weird, which is sweet.  Blue is her favorite color.

Bayville High.  Later that morning.  Cut to a classmate that has blue dyed hair!  There are not enough blue things in the world to eat.

Xavier Institute, study of Professor Charles Xavier.  Storm, Wolverine and Xavier are discussing their students.  Rogue can’t cut it as a tree.  Spyke has a hard time of keeping his true abilities a secret.  Kitty is aces.  Kurt is settling in.

Bayville High.  Kurt’s teacher, Ms. Vasquez, pulls Kurt aside.  She is concern that Kurt may be sad or depressed, as his answer to – what I am at home that I can’t be at school – is BLUE.  He stapled his sheet to other sheets, so that is clearly an F paper.  I like this page, as it shows that Vasquez cares as clearly he is sad at home.