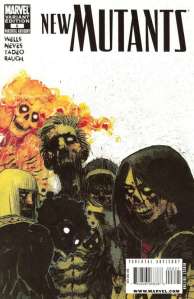 I own the other chapters but only reviewing this one, at this time.

Inside front cover ad is for the Nissan Shift. 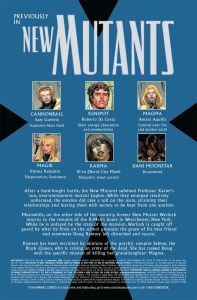 In issue five, Warlock return!  He came back to Westchester, saw that the school was destroyed as well as Doug Ramsey’s grave was empty.  Doug is alive, technically, due to Selene’s Necrosha scheme.  She has him going to Utopia, to kill her granddaughter (for the moment), Magma.

Utopia.  Island Nation of Mutantkind.  Danger is instructing Xavier to not visit his son, David Haller, just yet. Xavier has never been a calming force in young David’s life. 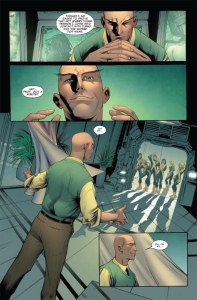 Xavier is visited by his third class of students. 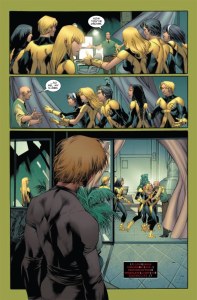 Oh Xavier, can never pass up a “to me, my X-Men” line.  All of the New Mutants are happy to see their original professor – except for Magik.

Also, we get our first exposure to Doug’s new running commentary.  He sees all movement as language, and his thoughts are binary. 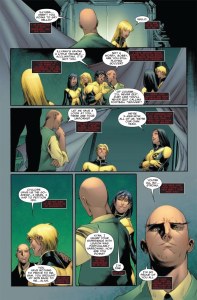 Xavier and Illyana exchange a cold greeting.  Sunspot tries to assure Xavier that it is mostly from her end.  Xavier is amused by their new uniforms.

I bet Xavier wishes he could speak longer with Karma.

All of these new sensations, as Doug has received a major power upgrade – but still an extension of his original powers.

There is an ad for Halo 3 ODST.

Later.  The team has gone to their giant room that houses them.  Sunspot hits on Magma and she shoots him a dirty look.  Cannonball rushes in to stop her and defend her.  Once in her room, Amara smiles – she likes the attention but not the guy, as who could enjoy Bobby’s company.  Amara also doesn’t appreciate Doug’s arrive or company, as he beats her with a baseball bat. 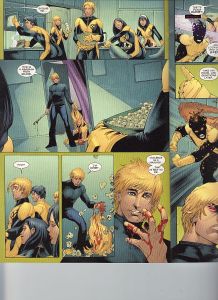 I like how Illyana was just enjoying a refreshing beverage, when Doug ruins everybody’s night.

The poor team’s mindspace, happy to see their fallen friend BUT he is holding Amara by her hair.  New Mutants 60, came out in February 1988 and this issue came out in December 2009, just over 21 years (our time).  Which is a long long time. 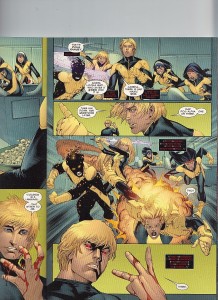 I like looking at those top two panels.  I’m not sure how Dani and Karma swapped positions but I like how fast everybody gets battle ready.  Doug’s eyes turn red and. IT. IS. ON!  Doug takes out the entire team!  He takes out Illyana with a nasty upper cut!

Doug starts a monologue, which gives Karma a chance to possess the team, which makes their movements sluggish, so the team is able to turn the tide.

Doug falls out of the window and onto the balcony below. 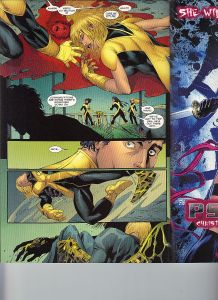 Sunspot checks on Magma, who is bleeding so much!  Something is picking up Doug, outside.

There is a house ad for Psylcoke’s miniseries by Chris Yost and Harvey Toubao – I haven’t heard anything about it, so I imagine it is passable.  I’m also not sure what she is seeking her revenge on.

The person is Warlock!  Warlock is angry as his friends are attacking his truefriend Doug!

There is an house ad for Thor 604, Doctor Doom Shall Know His Fury by Kieron Gillen, Billy Tan and Batt. 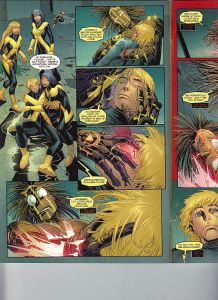 Cannonball tries to tell Warlock, what is up but he only wants to help his truefriend.  The Necrosha virus is too powerful and overwhelms Warlock. 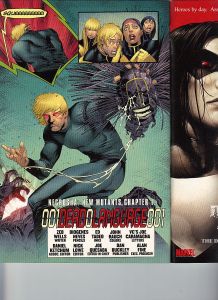 Unfortunately, that is all the hesitation Doug needs and his FREAKING RIPS OFF WARLOCK’S HEAD!!!  Warlock’s tears are for real!

I will review the other parts, someday but the next issue will be New Mutants 17.  Get excited!

The back cover ad is for the Kia Soul.