Tainted Love, Part One of Six

I only only the first three chapters of this storyline and will be reviewing all three shortly.

This volume of Ultimate Spider-Man happens after Ultimatum, me pointing that out will make sense at the end of the issue.

Brooklyn, 12:45pm – Bombshell (who is a mother and daughter team – the younger one will later be a member of the All New Ultimates) are knocking over an armor truck.  The truck only has six bags of cash but that should be enough. All I really need in life is like $100,000.00 and I could be out of debt – student loans be crazy!

They are glad there are no police or Spider-Man around when they both get webbing in their eyes.  They start spouting profanities, which I always read as “fuck.”  Spider-Woman calls them out on their language.  The mother daughter team keeps swearing.  The mother wants Lana to take the money and run but she isn’t going without a fight.  I wonder if they talk about this exchange ever, once they are on the same team.  Lana calls Spider-Woman nothing but a Spider-Man wanna be with a B-Cup.  Which she must barely be an A-Cup, so that must be some jealousy with the comment.

Nothing wrong with a B-Cup, look at Ashley Judd and Andie McDowell, even Michelle Pfeiffer.

Human Torch shows up, makes a crack about how there is enough of him for all the women present.  Johnny chases them with fire and Spider-Woman knocks them out.  Johnny tries to ask Spider-Woman out and she motors.

Poor Jessica, let’s just call her that, finds a dark place and takes her mask off.  Johnny was stalking her, so he now sees her actual face and is even more in love.  He would marry her, if she would have him.  He keeps pressing her for a date.  She can’t believe he won’t let up.

Over at Midtown High School.  Peter is trying to get to class, his girlfriend – Gwen Stacy – wants to take him to the ladies bathroom.  He is still maintaining his A grade point average. 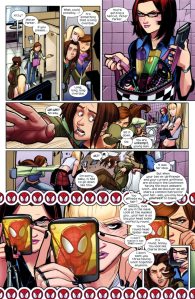 Kitty points out the stall he is suppose to go into.  Mary Jane is there and it is time for Peter’s haircut.  Which I was going to comment on, before the page, but his hair was so long, I thought it was Kitty for a moment.

I’m with Peter, I wouldn’t want these three broads hanging out together and eating lunch – nothing good can come from that.  Except for this haircut!  They all point out how round his head is, when he wears his mask, he has a perfectly round head.  Which I can only imagine this is a fun critique of Lafuente’s cartoony style.

Tandy, Ultimate Dagger, comes into the stall and is not thrilled that there is a boy in the room nor a haircut taking place.  To make it worst, a mutant is amongst them.  I wonder if Kitty ever brought this up with Dagger later.  I remember her being racist but her current persona isn’t like this at all.  I wonder if Bendis regretted this or purposely did it to build her into a better person.

Parker Home.  Aunt May loves the haircut.  This is during the era when Spider-Man, Iceman, Human Torch and Gwen Stacy lived in her house.  Such a great era!  Bobby thinks Peter has a pretty face.  Johnny comes home and tells everyone that he is in love.

There is an ad for Amazing Spider-Man 538, by Joe Quesada, which came out in June 2010.  The ad is promoting, One Moment in Time, so I’ve not been collecting Spider-Man comics for a solid five years.

Johnny thanks Peter, if it wasn’t for him, he never would have known love.  Peter isn’t sure who is a hot chick he knows as Spider-Man.  He names Silver Sabre, Elektra and Black Cat.  Gwen is not too happy that Peter knows so many hot ladies.  Both Johnny and Bobby want to meet this Black Cat.  Gwen thinks they all sound like skanks.  All three of them are well in their twenties, so they wouldn’t waste any time with a teenager.  Which is the right call.

Johnny finally explains which hot chick it is, Spider-Woman.  Peter can’t believe it is Jessica who Johnny is attracted to.  Which is a good time to mention how clever a line of Bobby saying Peter has a pretty face is.  Jessica is Peter’s clone, so if she is pretty – at all- then that means he has a pretty face.  If Johnny is attracted to Jessica, then there must be something that he finds attractive about Peter.

Making things worst, is that Johnny claims he made out with Jessica.  Hearing this, and getting it confirmed a few more times, Peter runs out of the house in a panic.  If Jessica did kiss Johnny, and I highly suspect that she didn’t, then there must be something in Peter that is attracted to Johnny.  Which this is a subject matter that the opposite-gender clone plotline (it happens) rarely deals with.

Spider-Man goes on a crime fighting spree that involves punching Ultimate Owl.  Do you know how to draw an owl?  You draw two circles . . . and then you draw the rest of the owl.

I saw this a few days ago and I keep thinking about it.

Back at school.  One of their teachers, Ms. Shutz, is trying to inspire seniors to do better in their classes.  Johnny is still pestering Peter for why he way overreacted.  Outside of the classroom, the principal and two federal agents are looking into the room.  The principal wants Kitty to get her things and head outside. 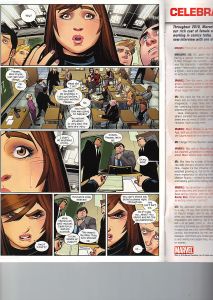 Kitty is confused what the principal could want.  This is what he referenced to in an earlier appearance (which I’m not sure was on panel) that the school may have problems with her being a mutant.  She didn’t do anything, in fact, she’s the model student.

Kitty gets it together and starts thinking about the situation.  What can anyone even do to her.  She can phase through their bullets then then the idiot behind her will be killed.  Which I really like the reaction of the fool who sits behind her, he is very concern.

Marjorie Liu is interviewed on the Women of Marvel page, that was a thing during this year.  I had forgotten she was around Marvel even back then.

The agents start making a move on Kitty.  Peter finally stands up and says what they are attempting is not right.  Also, that they are trying to make Kitty mad so that they can justify their incorrect actions. The issue ends with Peter yelling at Kitty to run as she whispers that all she wants is to go to school like everybody else.