So I was looking up information regarding Kitty Pryde, as I do, and I came across this –

Kitty Pryde was given her own template on Wikipedia, that’s pretty cool!

I was trying to figure out who originally created it but I can’t figure that out.

Oh, I was looking up to see how well received Days of Future Past was, as I downloaded the code for the Rogue Cut onto our Vudu account.  Something I didn’t really pay that close attention to, in the past.  It look like 30 minutes to upload our 20 or so codes.

Is there a way to reapply for Deadpool and Big Hero 6 codes?  I’m not sure what happen to our inserts but we no longer have the slips, so I can’t get credit for it.  Anyone know if I can provide the UPC and maybe a picture of it, to someone, and get a new code?  That would be nice.

So I went and checked Lockheed and Magik’s pages.  They don’t have their own templates yet.

Lockheed is still listed under Members of the X-Men template, between Lifeguard and Longshot.

Magik on the other hand, is involved in a couple templates.

X-Men Template, as a Member, between Maggot and Magma

New Mutants Template, as a Later Recruit, between Magma and Cypher.  At least it is in order of appearance unlike the X-Men template.  Which makes sense as they are a smaller group.  Seems odd to not include those three as Original Members, including Warlock.  I would start the “later recruits” page with Bird-brain, if it was me.  I guess it is interesting to note which five started the series, they did that with the X-Men template.  To me, though, the team isn’t really the New Mutants without someone or two of the later recruits – such as Magik and Doug.

Mystical Marvel Entities Template, under Demons, between Llan and Kazaan – two characters I’m not familiar with, at all.  Llan the Sorcerer was an Alpha Flight foe and Kazaan appeared in Fear Itself but starting out as a Ghost Rider villain.

Grigori Rasputin in Popular Culture, under Comics, and between her two older brothers – Colossus and Mikhail Rasputin.

Lockheed is in the animatic for the New Mutants film, along with Magik.

I’ll believe it once I see actual footage of him, in the film.  I am all for this though and I’m sure they’ll eventually work him over to Kitty Pryde but I’m super fine with him being associated with Magik, as well.

Anya Taylor-Joy is going to portray Magik in the movie, I’m not that familiar with her.  I haven’t seen The Witch but I’m following it on Roku so I can watch it once it arrives on one of our subscription channels.

She’s one of the gals in Split, a movie I really want to watch now that I heard about the ending of that film.

I was hoping to find a sweet picture of her that would show her as being a great Magik but I’m not finding one. 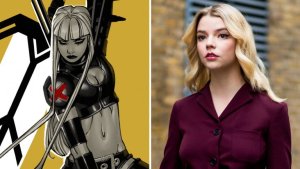 Someone was nice enough to put them together in the same image.  I can’t tell who did it originally.  I’m just adding to those who have done it.  If anyone knows, I would love to give the first person credit.  Seems like there isn’t that many great images of her to choose from.

To try to end on a more Kitty Pryde related note, Ellen Page is going to be in the Flatliners sequel, which looks intense!

Thanks to FilmSelect Trailer for hosting the video!

The trailer makes the film look so good.  I’m a huge fan of the original, that cast was amazing back then.  Time will tell if anyone besides Ellen Page makes a third film after this.  Well, I recognize Nina Dobrev from all of the Vampire Diaries that my wife watched.  But are they going to reach the fame of Kiefer Sutherland, Julia Roberts, Kevin Bacon, William Baldwin, Olivier Platt!?!  Oh and Hope Davis is in that original film too!  There was like 30 movies that I watched simply because it had Olivier Platt in it.  I’ll still watch an Olivier Platt film, as I’m such a fan of his.  Those original five cast members, well besides maybe William Baldwin being the weakest link in it, are all pretty incredible.

That Rogue Cut of Days of Future Past, it is like an hour before any of that footage shows up but I really like how they intercut the two Magnetos getting Rogue in the future and getting his helmet in the past.  Shame that didn’t make it to the final cut.

Searching YouTube, one video actually has the New Mutants animatic in it –

I’ll have to listen to the audio once I get a moment but it takes place between the 5:45 and 6:45 mark.  Magik, Lockheed and the Demon Bear!

Thanks to Emergency Awesome for hosting the video.

Wikipedia doesn’t have a page for the New Mutants film, yet, but that seems odd, right?  Most films get pages created as soon as one actor is attached to a project.

Pushing the bar along to find the clip I wanted, I was reminded that James McAvoy and Anya Taylor-Joy are both in Split, so I really do need to make a point of watching that film.  It appears that she’s the main girl of the three, for the film.

For some reason, it wasn’t easy to find the link to the New Mutants Film Wikipedia page –

Maybe I clicked the character Magik or the New Mutants comics page was linked and not the film but the film page does exist.  That makes more sense.

Wish Doug was in the film, I’m sure he’ll probably get name checked or have someone make a comment about his existence.  He’s so easy to adapt.

For that Kitty Pryde template, Pete Wisdom really should be added to it.  I’m not sure if I should be the guy to try to figure out how to do it but it isn’t done in a month, I’ll probably take the time to figure out how to add him.  Seems odd to not to include him under Supporting Characters.  Under Publications, should have Mekanix and Shadow and Flame.  Mekanix does have its own page, so that’ll be easy to add but Shadow and Flame doesn’t – as far as I can tell.  Does adding those two items to the template, automatically puts the template on those two pages?  I’ll try to figure that out, too.  I imagine they do sync together, eventually.

I guess they don’t sync as Lockheed is clearly listed on the Kitty Pryde template and the Excalibur template but neither one is on his proper page.

I’m confronted with the thought about wanting to add Rachel and Magik to her Supporting Characters list but then does one add Kurt?  Criminy!  Lockheed isn’t listed as a supporting character of her’s.  It must be a brand new template.

If I knew how to do it from the very beginning, I would create that Shadow and Flame miniseries page on Wikipedia too, but that takes a bunch of work that I’m not sure I can commit too.  But now that it is an idea in my head, I might end up trying to do it.  Can’t be that hard to do.  At least, I can create the frame of it and see how much more detailed I can make it.  It just has to be the same quality that Mekanix was.

Wolverine : First Class would be another swell publication addition.

She should probably also get a Creators line too, like how the X-Men have that.  Gosh, I guess I might end up updating all of this onto her template, but I’ll let the idea rattle around so that if I do attempt to tackle it, I do it properly.