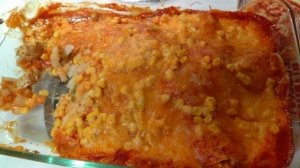 I really liked this recipe but my wife only thought it was okay.

When I prepare chicken, I like to use the spices from the dish to cook the chicken with.  This recipe didn’t call for any spices so I looked up one of our spice blends.

I think this could have gone better.  I didn’t have coriander leaves but everything else so I stuck with this recipe.  I need to learn to not use as much cumin, maybe half it.  We like it but a tablespoon essentially turns the spice blend into a cumin blend with a cameo appearance from everyone else.

We must have gotten bigger than six inch tortillas as I started with lining the bottom with six tortillas but then quickly realized that, with future steps, I would only use half of the required amount.

The directions state to not grease the pan, so I thought adding six tortillas was a smart away around that.

We had a decent amount of red enchilada sauce, left over, and that was after I used a pretty generous amount, throughout the recipe.

I also used plenty of cheese, as one can never go wrong with too much cheese and we did get the Kraft Mexican blend, this time.

Step five wants six more tortillas, and we bought a ten pack, which was helpful as it gave me a reason to pause.  So I used two at this step and two more for the next step.

I also missed the corn portion of step five and just threw the rest of it during step six.  Not like it really mattered but I was happy that I looked into the can of corn and noticed there was more in there.

Our next episode of Office Season Six, is Niagara, Part Two.

We had plans to really commit to Arrow Season Five, so that we could catch up to the current season but we missed the mark by two episodes.  Hopefully we can still catch up, but the season is getting better.  The show really could have been 21 episodes, instead of 23.  A comment I keep making.  I’m just done with filler episodes.  At one point, one of the characters actually said something along the lines of “we have to stop the search for Prometheus and handle this” which is essentially saying “this is a filler episode, ya’ll.”  Our next episode is Season Five’s The Missing.

We went to Great Falls, this weekend, and went to the Applestem Maze, which our son really enjoyed.

I was hoping for more of a Curious George presence as Walker Dennis is really into Curious George.  Well, he used to be more into his adventures but still perks up when he seems George.  If we were there opening weekend, they did have George and The Man in the Yellow Hat but we were never going to go during opening weekend.

We also stopped by Kelly’s Komix.

We were not going to go there, at all, as I wasn’t going to buy five comics of the 115 that I would need to buy to be current again.  But on Friday, I learned that Lockheed was in X-Men Gold 13 so we stopped by and they still had a copy of it!  So now I just need Captain America : Steve Rogers 15’s ResurreXion variant cover and I’ll be current on Lockheed’s appearances.  I still haven’t read the issue yet, but the hard part was buying it.

Such a great comic book store, too.  Probably the best one in Montana.  The Missoula one is nice but Kelly’s Komix has this incredible selection of back issues, and I could probably spend hours in there.  I’m lucky if I can spend 15 minutes.

I was by our storage unit, looking for my notary journal and stamp.  I knew they were in a comic book box, so I found that box.  It only had my journal in it, which is the least important part of the duo.  That box was supposed to have the last five comics I bought from Hastings, too, so that must be in another comic book box.  Next time I go to the storage unit, I’ll have to look for it, again.

My son and I are caught up on Riverdale’s second season.  So far, so good.  My wife pointed out that Mr. Lodge is portrayed by Mark Consuelos, Kelly Ripa’s husband.  He’s doing a great job, thus far.

We’re in the middle of Doctor Who Season Nine’s Face the Raven.  We started it too late so we couldn’t finish it.  Hopefully tonight.

I’m on episode 78 of Living Between Wednesdays.  Rachelle and Dave are going to review X2 : X-Men United.

I would be a couple episodes further but Comic Book Queers is back, as Comic Book Queers Legacy so I’ve heard the first episode and have the second one to listen to, as well.  Then I’ll write a post about that.  I missed Brett and EvilJeff.

Turtle Soup also released episode 162, and Prinze and the Wolf should be releasing an episode on Tuesday.  I’ve learn to just wait until Wednesday morning, to be on the safe side.

I’m almost out of my banked T-Coins in TMNT Legends, and becoming less addicted to it.  They keep hinting at a huge update but it hasn’t happened yet.  I just three starred the movie mission so now I can use my warp passes to quickly get the movie characters.  Of the released characters, the only one I haven’t made DNA progress on is Classic Rocksteady, so that has been fun.  Still a fun game, and I had to grind to beat the movie sidequest, but now that I have completed all of this prep work, the game should be fun again, as I can make progress again.  Hopefully.