I’ve given Call of Duty : Modern Warfare Remastered and The Witness a try.  I enjoyed MWR more than I did The Witness but I may not have given The Witness its fair due.  I got three puzzles in (and did the Easter egg was connecting the Sun and the gate) but then I was lost on what direction to follow.  Which I’m glad I never paid for The Witness, but if I had paid for it, I probably be attempting to finish it still and get my monies worth.

What I liked about the first three missions of MWR was how I didn’t need to be the star of the squad, others could do the harder work and the grand standing and I was super happy with being support.  Until someone told me to do something, then I was more than happy to do my part.  I wanted to redownload Black Ops III and see if I can take a back seat to the action in that game.  I can’t remember if I had a squad or not in that game.

I got to the Charlie Don’t Surf mission, and got inside the big office building and just got bombarded by enemy fire.  I tried several different strategies but done of them work.  I was hiding in back rooms for cover and then I tried to rush the waypoint to trigger the checkpoint, and I tried several times to take it slow but I’m clearly not meant for First Person Shooters.  I might still try Black Ops III again, it won’t hurt to download it again.  I didn’t get that far my first time around.  It was still clearly the first mission and a giant corridor of sorts but I was trying to rush it and shooting away but I need to slow down and see if I can get into a supporting role for the squad.

So not bad for two free games, but I’m not smart enough (or not patient enough) for The Witness and I clearly am not good at FPS.  But I had fun, and that’s what matters.

Walker Dennis and I have become super addicted to Lego Movie 2 The Game.  We beat the main storyline, which didn’t take us too long.  We figured out how to open relics so he went on a real tear unlocking items, characters, and equipment.  He’s mostly after characters.  He had the Status of Liberty unlocked but then the game went wonky and I had to download the previous night’s game file and overrode his brief progress when he was in Harmony Town.  He had unlocked enough items to earn the trophy for unlocking 100 items and he had a slew of characters.  At first, he seemed like he was fine that the three missions he unlocked had to be redone and he seemed like he was fine that we had to unlock the characters again.  Until he noticed the Statue was missing.  I hadn’t seen it so I wasn’t sure which statue it could have been but then I bought him Emmet’s Thricycle Set.

He started pointing to the Statue of Liberty and that’s when I realized which statue he was talking about this entire time.  As a patriot, I feel pretty lousy that I lost him the Statue of Liberty and we still haven’t unlocked her a second time but that’s the only character he really wants.  Which I get wanting to reclaim lost progress but it is completely random.  At least when we unlock items, if it is a duplicate, we get a piece of gold and if you unlock five pieces, you get a super gold relic that guarantees a new item, character, and piece of equipment.

By buying that set, Walker Dennis now has four Emmets, three of whom are from Lego Movie 2 and one is from Lego Dimensions, essentially from the first movie.

Originally, I wanted to get him the Introduction Queen Watevra Wa’Nabi Lego set from the second movie as he at one point, really wanted the banana guy, Banarnar but Walker wanted a $15 set over the $20 set, so I was fine with that.  Maybe after payday, I’ll get him the second set.  One gets a lot of value out of the above, as you get Queen Watevra Wa’Nabi in her horse form and extra pieces for her block form, plus a Lucy and Sweet Mayhem and that misdirection princess character.

We also have our eyes on the Ultrakatty & Warrior Lucy set, but that one is $30 (I had originally thought it was also $20) but that might be some time from now.  It comes with yet another Emmet so that kills my buzz but Walker loves creating Ultrakatty in the game as his preferred vechile and I think it’ll be nice for him to have it in real life.  If he got all of the sets, he would have three Lucys in total (one from the Lego Dimensions starter pack).  Which feels like too much. 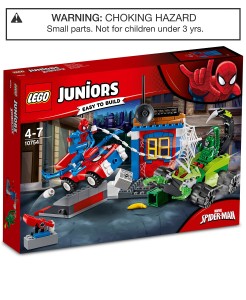 At one point, we had our hands on a Spider-Man Scorpion set but the idea of him having three Spider-Mans killed my buzz too.  It was only $20 and Walker was being a tad naughty at Target, so that just added to reasons for not buying it.  I do like the idea of a Lego Scorpion though.  We had also just saw that episode of the 90s cartoon that introduced Scorpion to that series.

Thanks to YouTuber Hien Biggerstaff for hosting the series!  He’s missing episode nine we’ve been enjoying watching the series this way as part of our bedtime routine.  Episode nine is the third part of the Alien Costume trilogy but it seems to be scrubbed from YouTube, which I get, I suppose.

I got pretty used to hearing the voices in a higher pitch and with that weird border.  It didn’t take long.  We just finished Part One of Hobgoblin which Walker knows The Green Goblin so that has been weird for him to see an Orange Green Goblin (which I tried to get him to at least think of him as simply The Orange Goblin but he wasn’t having it). 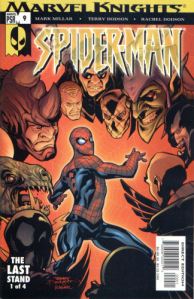 Which reminded me of the time I called it the Twelve Person Sinister Six in Mark Millar and the Dodsons’ Marvel Knights Spider-Man storyline from 2003.

I’ve been trying not to play Lego Movie 2 without Walker but once we beat the game, I figure it was fine for me to go back to some of the planets to get all of the purple master pieces as those are trophy goals.  I have all of them in Apoclypseburg and Asteroid Field with Systarian Jungle being our next goal.  He helps when we go back but then I just finish it up as it does get a tad boring searching for floating purple bricks and doing the quests.  Well, the quests are boring but searching for the searching ones can be a bit of a grind.  So over the past two nights, we do the quests and then I go back to clean up the rest.  But if he doesn’t play initially then I don’t do it so I won’t attempt Jungle until he is able to play with him.  Which we rarely play on school nights so it might have to wait until the weekend again.

In the meantime, as it doesn’t take too long to get those bricks, I have finally started playing Batman : The Enemy Within!  Which I have been really enjoying.  Mostly, I play Lego Movie 2 and then if it isn’t 11pm yet, I’ll try to play TellTale’s second (and last) Batman game.  Once it gets to a save point, I check the time and keep playing until the next save point.  It isn’t easy being a responsible adult gamer.

I was initially going to try to ship Bruce with Lucius Fox’s daughter, Tiffany.  But I missed a chance to lie to the Wayne CEO lady after I wanted to make sure Bruce lied to everyone when it was an option, but then I missed that one and then missed a crucial one later with Tiffany that forever broke their relationship.  Then I ran into “John Doe” in the back of the room and I’m still not sure if I want to make John Doe an ally or set him up for his villainous future.  The game already took Lucius in a different path than I was expecting.

I do so love that it carried all of my decisions from the first game over, as there are several reminders of the routes I took already during the first season.  I really want more Riddler too!  I’m sure the game strikes a good balance between Riddler, John Doe, and whatever else the plot requires as I’m sure there will be subplots and more Bruce time as well as more Batman time.  We have four full episodes left to see how it all unfolds.