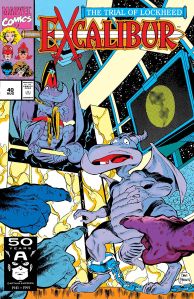 Thanks to Friend of the Blog, MoxieMk5, for suggesting I write the review for this comic.  It has been on my mind to do ever since!

Been a while since I wrote a comic, so let’s give this a shot!

This is the infamous issue where we follow up Lockheed getting hurt from the previous issue.  Since Lockheed is on nearly every page, I thought it would be fun to showcase the Kitty Pryde pages.

Also, special thanks for Marvel Database for having the creative team written out as the comic does not list them out.

The issue opens with a doctor remembering her cat died on her sixth birthday.  She recalls wishing people heaven and pet heaven was the same, as it doesn’t seem fair to never see your best friend again.

See how the credits don’t give the full names and duties?  I’m sure it made sense at the time.  Plus, that is a glorious splash page!  Actually, this entire issue has some great splash pages, that I’m sure Hoover, Candelario & Dzon have already since sold the original prints.

The team watches on as the operation lasts at least four hours.

Thankfully this is a comic from the early 90s, so I knew there was going to be a recap.  I had forgotten about the Doctor Doom arc of the past three issues, and how Lockheed got injured from trying to save Kitty from an attack by Doctor Doom.

Dr. Edgerton, the vet who lost her cat when she was six, is the lead doctor on the case.  She just patched Lockheed’s fifth lung.  She states that Lockheed’s recovery is up to him now.

Lockheed has an outer body experience that will take the bulk of the issue.  Since this could be seen as a dream sequence, it is hard to know how much of it could be canon.  I know he rarely is ever seen with the Flock outside of having a date to Kitty and Colossus’ would be wedding ceremony.

Lobdell has some fun writing in rhymes this issue.

I like how Lockheed knows his teammates’ names, and it isn’t like he has cute nicknames that he has given them.

It must take a lot of work to just instinctively know how to rhyme.  Lockheed would be amazing in a rap battle.  Though we do hear his thought process before in various future appearances, such as the Pet Avengers and SWORD, that he does not continue this.  It could be the medications he is currently on as well.

There is a lot of purple in this issue, which must have been fun for Vancata.

The Flock are putting Lockheed on trial.

I really miss the editor boxes as they could be fun on an occasion, besides being super helpful.

Lockheed is on trial for being . . . a traitor!  He left the Flock, and that is the highest of crimes. 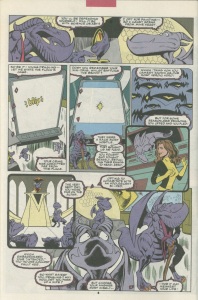 They give Lockheed the option to defend himself with either science or art, how does that type of system even begin?  Lockheed chooses painting.

Lockheed is held in high esteem for all of his work eliminating the Brood.  He met Kitty in Uncanny X-Men 166, and snuck onto their ship to head home.  He was scheduled to get married the next day, so that isn’t ideal.

We get an awesome panel from Uncanny X-Men 168.

Lockheed must defend his reason for leaving a bride at the alter. 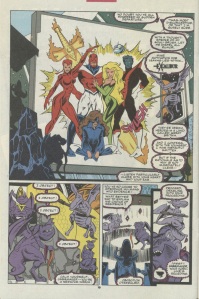 Lockheed states it was so he can join Excalibur, even though he was with the X-Men for years by that point.

He was smitten with Kitty (who isn’t?!), and gets cut off before he can really go into his case.  The prosecutor is really against him. 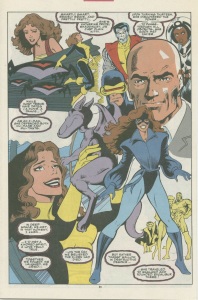 Lockheed begins to tell his side of Uncanny X-Men 168.  He says some really lovely things about Kitty.

This issue really serves as a great introductory to Lockheed, Kitty, and the entire cast of Excalibur.  The trial is just a framing sequence to do a little catch up for those who jumped onto the title with the Doom battle.

I would totally buy this print if I could.

He met a fellow warrior and he knew then, he had to be by her side.  The X-Men were believed dead, and she went to England, and he followed.

We get a great page of Nightcrawler’s origins.  Lockheed states Kurt is the backbone of Excalibur, which he is, but he is also the team’s heart and a great deputy leader.  This was also at the time when Kurt had a crush on Meggan.  It must be those elf ears!

The prosecutor is upset that Lockheed is revealing information from origins that Lockheed was not present for.  They discuss how humans don’t speak dragon, and Lockheed doesn’t speak human, they can’t communicate at all.  Lockheed reminds him that they are empaths, and that is enough for them to get along and be friends.

The prosecutor is called a casemaker, and his lovely wife explains how Lockheed is so passionate and clearly isn’t lying.  Turns out, the wife is Lockheed’s former betrothed.  Which, really, the casemaker should not be coming at Lockheed as hard in that respect, he got himself a lady out of the deal.  But a job is a job, I supposed.  She calls the casemaker, love-life, so I assume they are romantically paired. 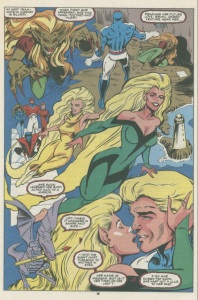 Lockheed is not quite sure of Meggan’s origins, but she isn’t sure of her origins either.

Captain Britain is searching for Rachel, the staff tell him she is on the roof.  She’s thinking about the events of Uncanny X-Men 207, where she nearly killed Selene, but Wolverine stopped her.  She has decided to not seek revenge against Dr. Doom.  Rachel gives Brian a quick recap of her origins from the Days of Future Past storyline, which I’m pretty sure he knows about by this point.  He’s very polite.

Back at the trial, the casemaker is asking Lockheed about being pals with the Phoenix, as she brings nothing but death.  The issue is really making a big point to remind us that Wolverine stabbed Rachel.

We get a nice recap of an earlier adventure in Excalibur with the Warwolves, Widget, and Colin.

Meanwhile, at Scotland Yard.  Inspector Dai Thomas and Alistaire Stuart are chatting about the wounded Lockheed.  Thomas, who doesn’t prefer superheroes, feels really bad for Lockheed, and doesn’t hold his pals being superheroes against him.  Thomas views Lockheed more as a dragon than a superhero.  Thomas gets a call and orders the roads between Scotland Yard and the hospital to be cordoned off.

I like how the trial is bouncing around Excalibur history, though I would have loved to see every issue recapped.  We cut back to them as they are discussing the Cross-Time Caper.  Lockheed has put the Flock to sleep with his tales.  The ship starts to rumble, as even the pilots are sleeping.  We learn that the Flock on the ship, are souls of the passengers, and their bodies are on their home planet.  Which explains how Lockheed is both on the ship and in the hospital.  If the ship crashes, Lockheed should be find, as his body is relatively close by.

Lockheed goes immediately into hero mode, as he tries to right the ship.  Lockheed could have easily escaped, but he didn’t, so the Flock see him as the hero he is.  Lockheed explains how he is who he always has been, but he’s now . . . Lockheed of Earth!  If his only crime was finding happiness, then he deserves to be sentenced to death.

Lockheed has earned the right to go back his body!  The Flock takes off, and Lockheed is left alone again.  He returns to his body, as a helicopter lands on the roof.

Rachel senses the hospital staff are now in a panic, and directs the team upstairs.  Kitty is worried about leaving Lockheed in his current state.  Brian wants to meet the threat on the roof, and away from the patients and staff.

The issue ends with the X-Men!  Jean Grey, Storm (with a short haircut), Colossus (the worst!), Psylockhe, Rogue, and brown costumed Wolverine!  As soon as the X-Men heard Lockheed was hurt, they were on their way.

The next issue caption hints that it is sort of a reunion.

I really should make a point to review more comics, but this one took a long time for me to find the time to do it, but I could have been better with my time management as well.