At first, I was confused why I bought this for Father’s Day 2015.  I thought one of my three favorite websites tricked me.  Then I came across the scene with Nightcrawler and Storm, at the Purity Rally.  This was the only issue I was missing of Alice Tremaine’s 13 appearances.  So now I own all of her appearances.

Another interesting note about Alice Tremaine, that I just discovered with this post.  If you Google “Alice Tremaine” you will see the stepmother (the wicked one) that harrasses Cinderella.  That step-family of Cinderella’s last name is . . . . Tremaine!  That has to be done on purpose, right?  Claremont would know the most famous usage of “Tremaine” So Claremont, amongst all of the other kudos he deserves, deserves a few more points for the naming of this character.

Inside front cover ad is for the Thomas Jane’s Punisher DVD.  Such a good movie!

Previously in the title.  The current team (think a Pre-X-Treme X-Men) are Storm, Bishop, Sage, Rachel Grey, Nightcrawler and Wolverine.  This team is called, X-Treme Sanctions Executive (XSE).  That’s the mission statement.  Last issue, Viper (one of Wolverine’s ex-wife’s) is back on the scene, looking for some sweet revenge on Sage.  Viper takes the team to a modified MurderWorld, she has also taken away their powers.  As bait, she has taken the Queen of England hostage.  Last issue ended, apparently, with her shooting Sage – to the head!

The Tower of London.  Viper is bragging, over Sage’s dying body, no one insults Viper, and gets away with it.  Rachel shows up and punches Viper to her silly face.  Viper gives back, as good as she can take it, which confused me until I reread the recap page.  I’m so use to skipping those, that the fight made sense.

There is an ad for Sky Captain and the World of Tomorrow, I still haven’t seen it.

Bishop gets into the action and Viper teleports away.  Sage stands up and reveals that Wolverine has been using an image inducer, this whole team.  Wouldn’t the bullet have just passed through her head?

A flatscan introduces Alice Tremaine, of University of Chicago fame.  They are hoping to turn a college movement, Purity, into a global party.  Chicago to London, does seem like a major step.

Kurt and Storm are stuck in the room, and the only way out is through hateful crowd.  Storm uses her African knowledge, that one doesn’t run from jackals, also, the flatscans don’t know that the two mutants don’t have their powers. 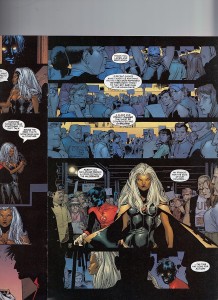 Alice Tremaine starts her hate speech as Storm and Kurt start walking towards the stage.  If I know Alice Tremaine, this is her best case scenario.

Some dumb jerk throws a chair at Storm but Kurt’s tail catches it.  Kurt, and me, don’t care for the term – mutie.  Kurt confronts the idiot and that fool passes out.

Alice Tremaine confronts Storm.  Earth is for humans and they will defend it.  Storm whips out her XSE badge, they are sworn to protect a world that hates and fears them.  Kurt steps between the ladies and tells Storm that they are done here.  Some dumb face wants to shoot them, as they leave, but another guy (a smarter one) is worried about the backlash from their fellow mutant brothers.

Once they are far enough away, Storm shows off that her powers have return.  Storm wanted to fight Alice Tremaine, so much!

Meanwhile.  Old School Excalibur ally, Courtney Ross, wants to be the new London White Queen of the Hellfire Club.  She wants Viper, who has a gun at her head, to be the Lord Imperial.

The London Eye.  XSE gets to the giant Ferris Wheel.  A taped message from “Arcade” (I’m not sure if it really is him or just a picture of him) reveals that it isn’t the Queen, in the upper car.  Which I’m curious where the real Queen is, if this was ever a credible threat.  I imagine, the X-Men are simply told the Queen has been captured, they believe it – that is the life they live.

In the top ar is Mrs. Ella Thurlough, one of the Queen’s housemaids.  If nothing is done, a simple bomb will explode, only killing her.  If there is a rescue attempt, even the slightest, a small nuke will go off.

Alistaire Stuart, old friend of Nightcrawler’s and Rachel, is there to confirm that what the message states, is true.  Rachel can’t believe that Alistaire can be so cold hearted, or practical.  I misread the page, I thought it read like – one bomb over the housemaid and a small nuke, somewhere else in the city.  Instead, the two bombs are located in the car, atop of the housemaid.

Storm has a plan.  Rachel is going to keep the housemaid calm, as Storm creates very intense winds Bishop is there to absorb the blast.  Rachel brags that Storm’s winds are stronger than those found on Jupiter.  Which seems too much, for such a small section.  Of course, XSE saves the day.  I do like how Wolverine has nothing to do, but watch from below.

Later.  The team assumes that Arcade’s message is just pre-recorded and he wasn’t involved, at all.

Elsewhere.  Sebastian Shaw arrives, to make a deal with Courtney Ross – who has to really be Sat-rr-9, right?  As we saw original Courtney Ross die, pay back in the day,  As they, Viper is there too, toast, their new pact – Sage has Shaw in her gunsight.

Other titles coming out in September 2004 –

I imagine I’ve read the Uncanny X-Men issues.  I must have read Exiles and Alpha Flight.  Gambit, I own that first issue, still.  X-Men The End, must be the first book.  I would have also been reading Cable / Deadpool. Jubilee by Kirkman, I imagine that was him just trying to make a name for himself.  Astonishing X-Men 5 is dealing with the after shocks of Colossus’ return.  I should have dropped Excalibur after the third issue but I read all 24 of those.  If Mystique was still being written by Sean McKeaver, at that point, it was still such a good title.  Nightcrawler, now that was a series that could have lasted longer but I really enjoyed it.

X-Mail, with letters from – Nadav Millman of Israel and James Hunter of Newbury, England.

Next Issue, X23 joins the title!  But she has already appeared in NYX.