Almost two years ago, on September 12, 2019, my wife and I were treated to the comedy styling of Gabriel Rutledge. 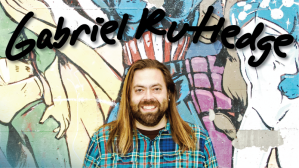 We get so few music or comedy acts, and his comic book background caught my eye.  It was super easy to convince my wife to go, and I have been thinking of his show ever since.

Thanks to Gabriel Rutledge for hosting his own video from October 2018.

He had an opening act, Chase Mayers, who was also pretty funny.

Thanks to Chase Mayers for hosting his own video as well.  He had shorter hair by the time we saw him.

If you ever get a chance to see him, I would highly recommend his show!