Sorry for the late post, having days off at the beginning of the year threw off my writing schedule. 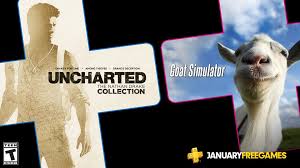 The January 2020 PS Plus Games are . . . Uncharted the Nathan Drake Collection and Goat Simulator!

Games I have definitely played before as I am a huge Uncharted fan and Goat Simulator was one of the few games I had for the XBox 360.  I was so confused by it but playing it now with Walker Dennis, it has been a lot of fun!  I am not sure if it was the system or the controller, or the game itself, but I just felt lost with it.

I have the Uncharted Collection on physical disc, so now I am just waiting for GameStop to have another double credit deal with trade-ins so I can get some store credit.

PSP Prices states the Uncharted Collection is typically $20 and goes as low as $8.

Goat Simulator is typically $10 and goes as low as $3.

So either the games are $30 at their peak or $11 at their lowest sales.  I am going to track this to find out when the Plus subscription pays for itself.  We are half way there or barely a sixth of the way.

Uncharted Collection has no DLC whereas Goat Simulator has a slew of DLC!

There is a DLC Bundle that is typically $20 or goes on sale as low as $5, which I am definitely tracking as that is a good deal for all of the DLC.

So five dollars is pretty good for all of that content.  I would never spend $20 for it.  I am a very patient gamer.

Here are my three subreddits’ opinions on the games.  Seems like most are upset that if you wanted the Uncharted Collection, you would have owned it by now, which I agree but I am also a guy who wants God of War and Horizon Zero Dawn, as well as Witcher 3, but will probably never buy those games for myself, not at least, not in the near future.

NA January PS Plus Fre Games Are The Nathan Drake Collection and Goat Simulator. from PS4

Uncharted: The Nathan Drake Collection and Goat Simulator are your PS Plus games for January from PlayStationPlus

Trophies are not earned on Explorer mode, which is the easiest difficulty.

Reading the titles, I like how the naming convention is kept through to Uncharted 4, A Thief’s End.  The titles are either Drake or Thief related.  Or Golden Abyss related.  I was tempted to get a vita for like $133 through Amazon but then I was given roughly that amount for Christmas but that particular one was sold and the next inexpensive one was around $200, which is way too much for me to spend.  Maybe Christmas 2020, but I doubt it.

I have been very tempted to start Uncharted 1 and 2, on Easy mode, just to relive the adventure, and just have a very chill time with the games.

In the meantime, I have been playing a slew of games over the holiday!  Just bouncing all over the place!

With the announcement of the games, I started Uncharted 4!

I was having a real blast, I think I am on chapter six?  They are at the auction, I know that at least.

Injustice is the first game, so once I beat the story mode with that game, I will probably trade it in for the 2nd one as that is the one I want, and I only want it for the sweet Ninja Turtles, so I can wait on that.  It is not a bad game, I am trying to learn the button combos but I do end up just button smashing or doing the five combos I am comfortable with.  I am also playing on Super Easy mode, as the trophies unlock with that mode and I am no good at fighting games.

Walker Dennis and I have really been enjoying Amazing Spider-Man 2.  He is playing it on Human (Easy) mode and I am playing it on Super Hero (hard) mode.  I am doing the boss fights for him but I am very impress with how much of the game he is able to do on his own.  When I am playing his file, I am definitely dreading doing these fights on Super Hero mode.  The Black Cat one was hard until I saw a video where a guy kept just dodge attacking her, and that really helped.  But there is a Kingpin fight that I am already dreading.  Walker Dennis is on his way to fighting the Green Goblin and I just completed the Black Cat fight, and on my way to Kraven.

The only problem with the game, is that the Web Threads DLC is no longer available.  Sony Support tried to unlock it for me, as I really want it and seven dollars is a pretty good price for it.  They told me to ask Activision but I cannot get into the Chat Queue with them, or I can, and then I miss it as it goes from 24 individuals ahead of me to it being my turn and I have missed it in the five minutes I did not check my phone.  So that has been rather irritating.

My wife was also very generous and got me a PS Store Gift Card and the first game I bought was Lego Batman 3 Deluxe Edition and Walker Dennis and I are having a huge blast with the game.  I was being a bit of a pill about not buying people until we had a million studs to buy the x2 multiplier, which is my usual policy with Lego games.  Then he bought a slew of people and then I put a stop to that until we could buy the x4 multiplier.  Then he had a play date and I had enough time to get enough studs to buy the x6 multiplier and now we have money galore!  We have also stopped playing for a bit but that is okay.  We completed the entire story and have to do free play for levels four and on.  The game is super fun and I could not pass up the deluxe edition for nine dollars.

I really need to get back into Lego Marvel Superheroes 2, but free play has been feeling like a chore, as I keep having so many levels to redo.  I think I have 11 left, as the game has 20 levels, so I am finally on the other side of it.  They are very long levels it feels like.  I just rather play all of these other games but once I settle down and sample these games, I will get back to it.

Anodyne was a dollar game during the Holiday sale.  I bought and got to the first cave and I have no idea what to do next.  I have walked all around it and found two cards and unlocked the doors I have found but now I am not sure what to do.  I have to watch a walkthrough.  I got the one trophy for finding the mop (the main weapon of the game), so at least I was able to do that.

I also saw in the Holiday sale, 2064 : Read Only Memories, and was reminded we were given that as a free game way back in October 2018, the same month we were given Friday the 13th : The Game and The Bridge.

I got through the Prologue and some of the first chapter, it is an interest point and click game for sure, and it has a charm about it.

So that is what I have been up too.  I keep thinking about what the next big game sale is going to be, but honestly, I have plenty of games to play that I do not need any more, which is super fun to be able to type.

I set up Walker Dennis with a PSN profile, so now his trophies will be permanent, as he really wanted to play Portal Knights under his own account, so I had to create a yahoo account for him.  It is a real shame he had to lose all of his other trophies but we will just play those games again and scoop up some easy ones for him.

I completely forgot that we also got Walker Dennis the Fantastic Beasts pack!  We got two chapters in, and then I bought Lego Batman 3, so we have four more chapters to go!  I know there is a secret STAR Labs from the Flash television series, we just have to find it.

We also watched the movie and it was a pretty decent time.  I just felt disconnected but I am glad we watched it as the game probably would not have felt complete without the original reference.  It was fun watching it and trying to anticipate what would be adapted.