I own this for the Kitty Pryde references in two spotlights. 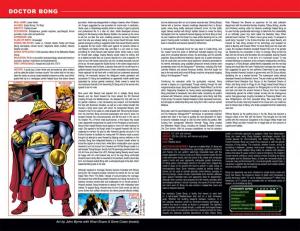 Doctor Bong gets two pages, that reference Deadpool Volume One Issue 27.  Deadpool’s entry references this adventure, but only that he fought Wolverine at Doctor Bong’s suggestion.

Weasel’s profile sneaks in there next to Zero.  Zero’s Kitty Pryde reference is from Excalibur 77 – 80.

Other entries of note –

Due to Deadpool’s time with the Great Lakes Avengers / X-Men / Champions / Initiative (and formerly, Lightning Rods) many of the members make the handbook!  Big Bertha, Dinah Soar (probably my favorite team member, I love the pun of her name), Flatman, Grasshopper (who had a very brief stay as a member and a living person) and Mr. Immortal, their leader.

GW Bridge, who has a first image of him being very old and overweight, when did that happened?

Zoe Culloden from the Joe Kelly run, and of LL&L.

Deadpool’s own profile is five pages – which makes sense.

Madcap gets two pages, a character I made a reference to that I didn’t know too much about.  Still not seeing why he was worth bringing back.

Montomery, his life ends up being okay

Not a bad handbook, at all – such a great resource.