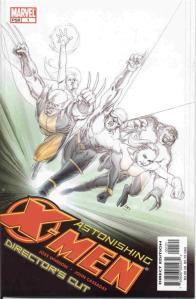 Gifted Part One of Six

So this is the regular issue plus some bonus back up features such as covers and character designs.

Apparently Cassaday did the original sketches for the Reload Covers that seemed silly at the time.

I own all of these except for New X-Men Academy.

If you like the half sketch for the cover, there is a full sketch version of the cover.  I wish I own the team cover.

Kitty is mentioned on the last featured page of 13.