All New Official Handbook of the Marvel Universe A – Z 8

A year ago, we lost Herb Trimpe and today, we look back at another comic that I have of his.

Unfortunately, Trimpe only has one spotlight that features his art.  Outlaw Kid, a character I really enjoyed in Blaze of Glory, a series that I would buy another sequel of, at any given time.  He was also used to nice effect in Dan Slott’s She-Hulk series.

The profile that got me to keep this issue is – 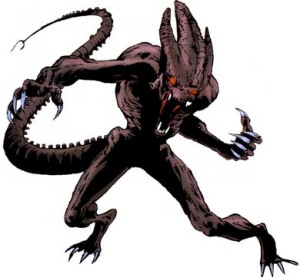 The N’Garai, art by Thomas Derenick.  Which, of course, mentions the incredible and legendary adventure of Kitty Pryde one fateful Christmas Eve.

Other Entries worth mentioning –

Night Nurse, only note worthy due to her inclusion in the Daredevil Netflix series.

The Marvel Proper version of Nighthawk gets two pages

Orge, who I liked in Thunderbolts, get a page

Onslaught gets a page

Generation X’s Penance gets a page

Genis-Vell, Captain Marvel’s son, who is going by Photon apparently.

Runaways’ parents, the Pride, gets a page

The first attempt to try to create a Pre-Captain America in, Protocide, gets a page.  I really dug this guy, back in the day.  He got replaced with other characters, over the years.

Spider-Man off again on again pal and villain, The Prowler gets two pages.

Also getting two apes, Puma!  Who I guess now didn’t pay for the Parker honeymoon now.

A year today, the world lost legendary artist, Dick Ayers.  He provided the art for the Red Raven profile. 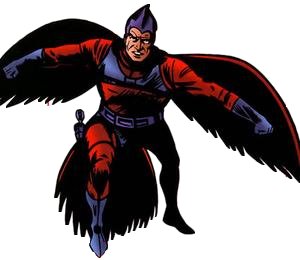 I own this for the profiles on Arcade and Storm for the Kitty Pryde references.  Magik is referenced in the M’Kraan Crystal profile.

Nice that head writer / coordinator Jeff Christiansen gave himself a profile in the back.

Other big name characters in this handbook are Norman Osborn, Puck and Spider-Man 2099.  Also, Quasar if you are being generous.

Contest of Champions is also covered.

On the cover, three teams are represented – Power Pack, New Thunderbolts and Defenders.

There are some profiles worthy of purchasing : 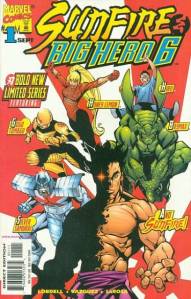 Big Hero 6, just because this is Big Hero 6 Month.  Art by Gus Vazquez.  Three years later, this extact profile, word for word, in the Marvel Your Universe Saga.  The team did not last at all.

Excalibur, it doesn’t list Lockheed as a member – which is foolish.  Art by Alan Davis.

New Mutants lists Magik as a former member.  Picture shown is the squad.

Power Pack has Magik mentioned a couple of times in the profile.

X-Men, of course has Kitty as a member.  Art by Carlos Pacheco.

With this, Big Hero 6 Month comes to an end.  Pretty sure we won’t be watching this in the theater.  We will buy it once it comes out on BluRay.  Here is hoping it is good and profitable, so that we get more Disney / Marvel animated films.  Even if they are direct to DVD, as long as they are adaptations or good – I will be happy, either way.

All New Official Handbook of the Marvel Universe A – Z 6 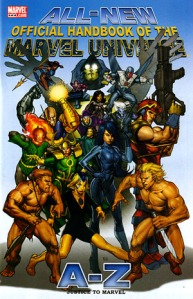 I own this issue for the Khaos entry, the new character that appeared in Excalibur Annual 1 in 1993 (one of those every annual that year required a new character).  More on that and the character when we review that issue in June (something to look forward to!)

I wonder if I really should be owning these latest batches of Handbooks (from 2004 forward) that just merely mention Kitty as oppose to only owning the handbooks that actually have entries for Kitty, Lockheed or Magik.  As I’m definitely not going backwards and buying all of those original handbooks for the mere chance of having a reference to those three characters.

The reason I’m spotlighting this issue is due to the legend that is Dick Ayers, sadly passed away on May 4, 2014.

We haven’t really dealt with deaths here on S&FwM and I’m not sure exactly what the best way to handle them are.  I figured I would review an issue of theirs and that would be how we do it here.

Dick Ayers was the penciler for Sgt. Fury and his Howling Commandos for ten years.  He also created the original ‘Western’ Ghost Rider that would eventually be known as the Phantom Rider once Johnny Blaze came onto the scene in the 70s.  Sam Elliot sort of quasi played the character (loosely) in the first Ghost Rider movie.  Which I own the second one but have yet to watch it.  That one and Thor 2, just waiting for my wife to watch it with me and that is hard to schedule.

In terms of comics I have with Dick Ayers’ art work in it, I only own five comics – four of them being handbooks and the other is Amazing Heroes Swimsuit Issue 3.

That’s one of my regrets with these legendary artists of the silver age, is that my collection doesn’t go that far back and so I don’t really have any of their real work that others will reference.

You can learn more about Mr. Ayers from his Wikipedia page :

And there is this nice fansite :

Dick Ayers art is used within the profile of Mad Thinker, for the Man-Slayer section

Other profiles to highlight :

Senator Robert Kelly, does have a Kitty reference for Days of Future Past

Kylun, no Kitty reference but plenty of Excalibur references