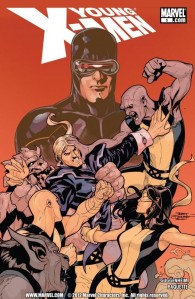 Cover by Terry and Rachel Dodson

I only bought this for the final page tease of future storylines.

Which this title got cancelled before it could get to the three exciting concepts.  Which goes to show that you should always do the great ones first.

If you have these bullets in your gun – Y-Men / Spider-Man / Magik / Doug Ramsey, why would you even waste time with the Y-Men?

This is what happened before that final page :

The Young X-Men team realize that the Cyclops that sent them to attack the New Mutants, was really the Hellfire Club’s Donald Pierce, as he is unhappy with Sunspot being a member.

The heroes fight then team up, they go after Pierce.  Wolf Cub dies, that’s pretty much it.  Dani Moonstar is there, so that’s good. 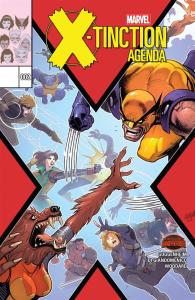 X-City.  Genosha Attack Minus Five Minutes.  Rachel and Beast talking about their new recruits.  Apparently, Beast has gone back in time and taken – Thunderbird, Wolverine and Banshee – all before their deaths in Giant Size X-Men, which is a weird place to state when they could have died.  Beast wanted to prove that it was possible, which really seems to lower the stakes, for this series.  If people die, then Beast can just bring them back.  I get that the ones with the extinction virus, that wouldn’t be an option for them, as they would just die again, from the virus.  It is an odd inclusion.  Why even bring it up, it must be important later but it is teased here.

The attack happens, like it did last issue.  We get Kitty and Lockheed(!) in the fight!  It was a pretty good week for Lockheed, appearing in this title and in Years of Future Past 2.

Rictor and Meltdown do end up confronting each other.

Rachel summons her X-Men to the baseball field.

Poor Kitty AND Lockheed take a direct hit of Havok’s cosmic blast – but no one mentions Lockheed again.  I hope the little guy is okay!  Rogue tells Nightcrawler to get Kitty to the Infirmary. 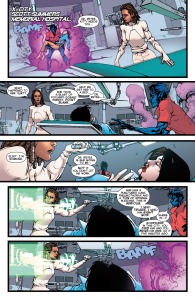 X-City.  Scott Summers Memorial Hospital.  Kurt asks Dr. Reyes to heal Kitty.  Dr. Reyes does a scan and reveals that Kitty has a punctured lung, pneumothorax and a ton of internal bleeding.  Reyes needs Kurt to bring her, Triage.  Which makes sense.

Rogue fastballs Wolverine, which he isn’t familiar with the term.  If he’s been dead for the past twenty years of publication history, would the X-Men even have come up with the, fastball special?  Wolverine being gone from all of those storylines, is too big of a deal to just add to this title.  So many implications that will never be addressed – most likely.

Havok and his team have lost their quinjet and scramble to come up with a new plan.  Rachel tries to harass Havok and Rahne but they get Wicked to have ghosts from Rachel’s past haunt her.  Rachel freaks out from seeing the ghosts of her parents and grandparents.

Karma is on Havok’s side and starts taking control of peeps – first up, is Rogue.  Rogue absorbs Rachel’s powers.

Kurt arrives, and I can’t find Kitty anywhere on the page so I’m not including it.  Dr. Reyes confirms that Triage is who he says he is, which surprises him.  What really surprises both Triage and Nightcrawler, is that Dr. Reyes knocks both of them out.  Dr. Reyes is really . . . Mystique!  dun dun DUN!

Havok tells Mystique that she has to come to them.  Rogue starts taking out fools, and Karma also takes over Beast.  Mystique arrives on the baseball (battle) field and Tempus (who is also on Team Havok) teleports everyone back to Genosha.  Wolverine jumps into the portal energy so he is gone, as well.

Everyone who is back, feels pretty bad about having to attack their friends, but if they were real friends, they would have not forced their hands.

The Genengineer hooks Triage to the machines, to see how the best way to use his powers.  But what he really wants, is to use Triage’s power to cure a virus but not the extinction virus – but the virus called, mutants!!!  dun dun DUN!!!

Back at the X-City.  Rachel and Beast are regrouping.  Beast is worried as, if anyone was infected, they could have infected some of the mutants in the city.

Issue ends with Beast revealing there were no serious injuries.  Even Kitty only has a concussion, so I’m going to assume Lockheed is okay too.

Will Kitty be on this new away team?  Will we see Lockheed with a bandage on his wing?  Time will tell!

Everything I know about the original X-Tinction Agenda comes from UncannyXMen.net –

Since it took three months to print three issues of each, the Uncanny X-Cast covered it over three of their episodes

So now you know what I know about the original crossover.  Oh, and that final storyline of X-Men Forever 2 with Ro and Ultimate Storm that dealt with Storm’s portion of the crossover.

So let’s enjoy this for what it is.

So this is another one of those “years later” miniseries, along with Inferno.  The Legacy Virus is just now effecting Genosha.

Genosha, then.  Cyclops and Havok are knocking Cameron Hodge out of action.  Wolfsbane tears off his head, finishing the threat.  The various X-Teams leave the island but Havok and Wolfsbane (and a few others) stay behind as those two want to make sure what happened in Genosha, never happens again.

Genosha, Now.  Havok and Wolfsbane have a team.  Those two and Chief Magistrate Anderson.  They are on day three of trying to break up a food riot.  Helping them are – Simon Locke “Bulletproof” power is being bulletproof.  Julio Esteban Richtor “Rector.”  Xi’an Coy Manh “Karma.”  And possible new mutant, Wicked, Ghost Summoner – who is freaking people out with ghosts of their past.

Xavier arrives and everyone is still in awe of him.  The riot disperses and there is a calm.  Xavier is really, Mystique, of course – as Xavier is dead.  Dr. Alous Kluge is still the Genegineer.  Wolfsbane wants to go to God Doom and get his permission to fix the Legacy Virus.

Doomstadt.  Doom turns down the offer of aid.  Strange casts the, Winds of Watoomb, and forces Wolfsbane back.  Doom tells Strange that mutants are the blight upon the world.  Which is odd that he even put them on Battleworld.

Wolfsbane is not happen and asks Rachel Grey for help as she is the Baron of this region of the planet.  Wolfsbane wants Triage and Rogue to be sent to Genosha.  With Rogue’s power, they can heal twice as many people.  Rachel doesn’t want to infect any more mutants, than necessary.  Which seems overly harsh but it falls under the whole, let a thousand die to let millions live.

X-Topia Province.  X-City, Home of the X-Men.  Beast is convincing Rachel that the number game is the correct way to view this.  They walk by the graveyard that reminds me of the graveyard from Days of Future Past.

I don’t get how all of these X-Men died.  Like, how does Spider-Crawler work?  Was it more than three to five years?  I don’t see how Nightcrawler and Spider-Man both had kids and then they had a kid.

Genosha.  Havok and Wolfsbane are clearing having sex, so that’s a plus for Wolfsbane.  They come up with a plan that they are going to go grab Triage and Rogue.  Cyclops, who is dead, appears before Havok, as Wicked doesn’t quite have her power under control.  Ghost Cyclops asks Havok to not to abduct X-Men, as that didn’t work out so well in the original crossover.  Havok doesn’t listen and goes on with the mission, but with some regrets.

On the way there, we get a light scene with Havok checking in on Rictor (who isn’t gay yet) as there is a chance he can run into Boom Boom. 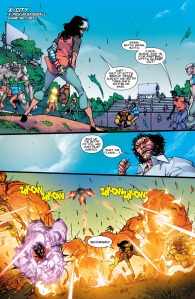 X-City.  X-Pickup Baseball, Game No. 1,065.  We get to the page that got me to buy this issue.  Rogue is trying to strike out Kitty, who Wolverine claims is an easy out.  Lockheed is floating behind Kitty, and that is awesome!

So the Genoshians show up and ruin the game.  Big fights break out.

Rockslide points out how silly this is, as five against a hundred mutants, are not great odds for the invaders.  The big fight is merely a distraction.

Anderson calls the Genegineer. who is a little preoccupied as he is trying to bring Cameron Hodge back to life.

I’m not sure if I’m getting the next issue but the first issue was pretty interesting.