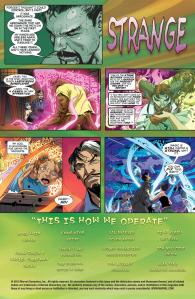 This seems like a very brief recap page.  Doctor Strange apparently broke his hands, or something.  He took on a new student, Casey.  A wish-granting demon, Laroximous Boneflayer, has Casey’s soul.  Also, and this is key for this issue, magic is having a stroke.  Which seems like what is happening in the current comics, that the world is magic is breaking apart.  I suppose that it is an easy story to come back to.

Outside of Strange’s home, magic is flaring up everywhere.  Strange and Casey are safe, as long as they stay at home.  Outside – Brother Voodoo, Ghost Rider and Damian Hellstrom – are trying to fight back magical forces.  Strange realizes what magic needs is a surgeon.

Strange needs to stop the hemorrhaging, so he sends out a signal to his fellow heroic magic users.  One of those users, is Magik!  Which is pretty cool!  Strange wants everyone to stop using magic for an hour.  I’m just now noticing that Doctor Doom got the message as well, I’m sure he took the suggestion well.

While talking back, like a dman fool, Damian Hellstrom gets taken out by some tree limbs.

Strange explains to Casey that Eternity, who contains the entire universe, his magic gland is leaking.  While Strange is dealing with that, he gives Casey a gem so she can find Larry, so she can get her soul back.

While Casey is looking for Larry, she sees Magik and Brother Voodoo.  Strange’s body is vulnerable during this operation.  Without her soul, Casey is internally aging.

Some old guy, who I’m pretty sure isn’t name checked in this issue, is approaching Strange’s home, he has a dagger so he’s up to no good.

Larry finally appears in the gem and tempts her to release him from his prison by offering to return her soul to her.  While she’s across the room, the old guy (who has an eye patch) steps closer to Strange’s limp body.

oh, he does name himself, as he mutters his name to Strange.  He’s Isaiah Curwin, The Silver Dagger.  Casey finally recognizes she’s not alone in the room and actually debates taking the few seconds to grab her soul sphere but in those seconds, Strange’s throat would be slashed.  She tackles Silver Dagger.

Silver Dagger flings Casey across the room.  Magik and Doom look like they are trying to be proactive, but without using her magic.

Silver Dagger is choking Casey but a giant pink foot squashes him.  Strange’s astral form returns to his body.  Silver Dagger is super dead, and Strange isn’t happy that Casey used magic in such a big way.  This was her final act though, as she fades away.  Once she is gone, Larry comes out of the portal.  Larry gives Strange’s Casey’s soul sphere and this encourages Strange that Casey is still out there as she can’t be dead when her soul is in a globe.

Apparently, she only appears next (and finally) in Girl Comics 2, which I own and will review, one of these days.

Which came out two months after this issue, so that’s not too bad.

There is a preview of X-Factor Forever’s first issue, at the back.