X-Men Age of Apocalypse 2005 One Shot

“Talking About My Generation”

Most of the stories take place before the original crossover, except for the last one as it sets up the upcoming miniseries.

This story opens with Colossus sitting on his butt, as the X-Men fight Sentinels.  He’s thinking about all he has ever known, is fighting.

I do like how Rogue and Sabretooth keep fighting on, as if they always expected Colossus to falter.  Sunfire is there too, he’s also disappointed in Colossus.  Rogue promises to have words with him, later.

Back home, Magneto is even more disappointed in Colossus.  This is probably the most Colossus deals with the fact that his brother is a Horseman of Apocalypse. 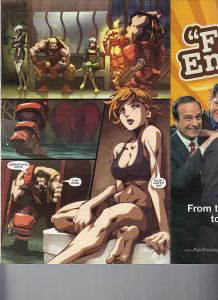 Look at Shadowcat there!  Why would you ever leave the house!?! 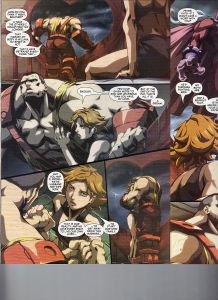 Colossus starts to unload his problems onto his common-law life.  She’s ready to just leave and recommit themselves to having a family.  Hopefully they don’t plan on moving to the Midwest. 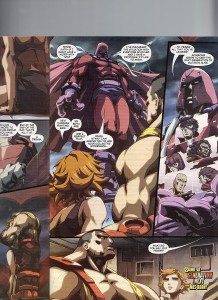 Magneto arrives, he has a new goal for the couple.  He wants them to start teaching the next generation of students.

There’s a story featuring Sabretooth.  A character who gets plenty of attention in the pages of Exile.

Weapon X, Logan, gets a story, back when he had both hands.

The final story picks up with the bombs would be exploding at the end of X-Men Omega.  The bombs were exploded overhead, so no one dies.

Issue ends with some nice pinups including – 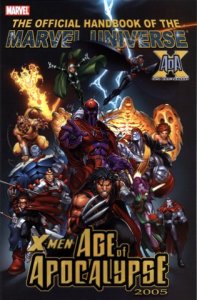 In 2005, for the Tenth Anniversary of Age of Apocalypse, Marvel released a handbook, a one shot and a sequel series.  This is how we are ending our Apocalypse visit with these issues.

Spotlights in this handbook are –

Apocalypse, a name i misspell every fifth time.

The X-Men!  Sadly, Shadowcat is deceased.  Her art is provided by Alvin Lee.  We’ll see more of that in our next review.

Poor Kate Pryde, has had a rough life.

The Exiles, who visited the timeline during 2005.  Also, Blink, Mortph and Sabretooth come from Age of Apocalypse. 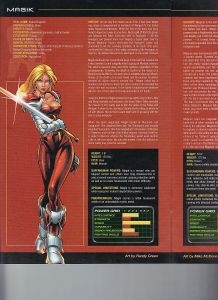 The Exiles’ Magik also had a rough life but I love how much she enjoyed being rough around the edges.

Nocturne, this handbook is working as an AoA / Exiles handbook, with all of them getting entries

There is an Age of Apocalypse Checklist in the back, which includes the 2005 titles.  Nice that they added Exles 60 & 61, so now we all know those issues as well.  I don’t own either of those as Magik was no longer in those issues.