Both are multiplayer shooter games, but both also have single player campaigns, so that sounds pretty great.

Call of Duty WWII is available now, and Battlefront II will be available to download on June 2nd.

Call of Duty WWII is the standard edition, that they do not sale anymore, so typically if someone wanted to buy this game, that person would have had to buy the Gold Edition, which is typically $60.  So that makes it pretty hard to determine the proper value of this game.  The Gold Edition goes as low as $19.79.

Both games have a slew of DLC.

There is a Premium SHAREfactory that is free, so I downloaded that.
Endowment Fear Not Dynamic Theme for $4

So the Season Pass seems to save you four dollars, and probably comes with some additional stuff.

There are two free static themes and a SHAREfactory theme, so I downloaded those.

So it seems like the base game is good enough.

Here are reddit’s responses.  The announcement was delayed for The Last of Us Part 2’s State of Play, and there was discussion if Call of Duty WWII was a bonus game or one of the two titles, as two years ago, Black Ops III was given away around this time, then we were given two proper titles.

Star Wars Battlefront II and Call of Duty: WWII are your PS Plus games for June from PS4

Star Wars Battlefront II and Call of Duty: WWII are your PS Plus games for June from PlayStationPlus

Some comments are stating how the games are pretty massive, download size wise.  So that’s good to know.  I’m going to have to clear an additional 100gb when I get home tonight.

Adam of PlayStation Grenade, he did two videos as the games were announced.

Here is PlayStationTrophies.org’s guides to both games :

So my main goal is to attempt the single player campaigns for both games, and maybe attempt multiplayer trophies that are pretty easy to obtain?

There are two pretty good sales going on right now.  One is another Games under $20 sale, and the other is a Double Discount Sale.

Lego Star Wars Force Awakens, Deluxe Edition, is finally $7.19 again, so I snatched it up.  I believe the only Lego games we are missing now for the PS4 are Worlds and Hobbit.  Which I guess I will buy those once they drop to under ten dollars.

Next week is supposed to be the beginning of PlayStation’s Days to Play, with loads of discounts, so that’s something to get excited about.  I am hoping there are some deals on Vita games.

In the past few weeks, I have been playing a slew of games.  Well, sampling games, I supposed.

One reason not to be upset about Call of Duty WWII not being considered a bonus game, is that we were given the base game of Final Fantasy XIV for free.  From what I can tell, you don’t have to pay the subscription fee until you reach level 30 or something like that.  I’m not sure how much more I will be playing it, but I have been having a great time.  For my own anxiety, I am trying to not fill up my duty journal with tasks, as my first night playing, I was racking up quests, but now I am level 10, and just learning how to do more things, and I am finally comfortable with the little of the map that I have explored, that I’m just taking one quest at a time, possibly two or three, if they are nearby.  I made a gladiator modeled after my wife, and I think she came out pretty well. 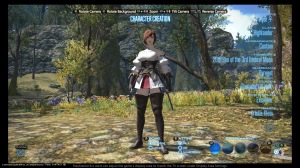 I’m mostly looking for outfits with purple in them, so I’m hoping those will be coming soon.  I need to get her some armor for her waist.

It took so long, but totally worth, but I finally earned some pants for her!

We watched the Sonic movie, and had a very good time.  We rented it through VUDU, but Walker has since fallen in love with the character, so after payday, we will probably be buying it.  I downloaded Sonic Mania and Sonic Forces again.  I made no progress on Sonic Mania, so that was lousy.  Sonic Forces, on the other hand, I completed several more levels, so that has been fun returning to the game.  I really should be playing one level of it, and then bouncing to Final Fantasy XIV, but that means closing one application and starting another, and that kills my buzz.

Except, really, it shouldn’t, as FF14 is completely online, so I am essentially starting it over every night anyway.

In our excitement about Sonic, I gave in and we purchased Sonic for Lego Dimensions.

Thanks to Lego Dimensions for hosting their own video.

Walker Dennis is way into Knight Rider again, so the above video has been nicely timed.  We already had Mr. T, and seeing that the only character we didn’t own from the video was Excalibur Batman, and I found him reasonably affordable on eBay, I bought him too.  So we’ve been playing Lego Dimensions again.  Excalibur Batman is around $11, so don’t spend more than that, if you are searching for him.

Turns out, we barely played the Teen Titans Go level, and a few more worlds had repair spots that we never did, so I have been trying clean those up, in anticipation of getting Sonic and Excalibur Batman.

We also watched Scoob, and now I’m way into Scooby Doo again.  We bought the two live action films through VUDU, and also the latest Scooby Doo meets Batman from Brave and the Bold, which was very good.  Riddler is in it, and I’m all for Riddler content.

I really wish Will Forte tried to do a Shaggy impression, but besides that, I really liked how they are trying to create a Hanna Barrera Universe with the film.

I had two different bids for Scooby Doo and Shaggy for Lego Dimensions, but both went above what I was willing to pay for it.  But now that the thought is in my head, after payday, I’m going to put another $20 aside, and try again.  I will probably be buying the Witch’s Ghost movie, and we saw there was a full length Lego Scooby Doo animated film, so I might buy that one once I have bought the Lego Dimensions set.

I own the original Scooby Doo meets 66 Batman animated film, but I would love to get it digitally as well, but VUDU is not selling it.

Walker Dennis and I have been watching the 2012 Scooby Doo Mystery Inc cartoon on Netflix, and that series is so worth your time!  Amazing how 2012 gave us some definitive takes on both Ninja Turtles and Scooby Doo.

Every time I try to load Omega Quintet, I get a black screen, so I have made no progress on that game, unfortunately, I am hoping that playing these other games, it will do something with that game, so I can play it again.  The only game that loads to black screen, and nothing comes from it.

I have successfully played the rest of the 2018 PS Plus titles that I never got around too.

Space Overlords, was simple enough.  I followed a guide, and earned several trophies for planet creation, and then I completed the first level.

Another World, I was following this video :

Thanks to Achievement_King for hosting the video.

He is a far better player than me, and I got stuck around the 20 minute mark.  Too much has to go right, and I don’t have the patience to keep up with it.

Laser League was fun, I successfully completed the tutorial, and did two online matches, lost both times, but I was getting a tad better at it.  I was tempted to keep playing until I won one, but I was ready to move on as well.  Both games, I played against computer peeps, so maybe no one is playing it anymore?

Rocketbirds 2 : Evolution was fun enough, but once I earned the first trophy, like an hour into the game, I was ready to delete it.  I’m just not up to the challenge of it.

Iconoclasts was another game that I was enjoying, and it was a challenge, but now I’m stuck trying to locate a fourth key, and it is harder than I am willing to spend time doing, so that’s that.  I’m pretty cut throat with these older games.

I played the first levels of both Lego Harry Potter : Years 5-7, and Lego Ninjago. I forgot how quiet the older Lego games are, but I enjoyed Harry Potter enough.  I have way too many Lego games going right now.  Lego Ninjago was good too, I didn’t experience any problems, besides the second level loading immediately after the first, but that happens from game to game.

Walker Dennis does not seem to be interested in playing the PS4 as he used to, so I may have to hold off on buying any more Lego games, but I enjoy them enough to at least have them in backlog.

I forget how it came up, but Walker Dennis wanted to play a racing game and I quickly downloaded Trackmania Turbo, for him.  Looking at the trophies, I thought I could do a few more of those, and made several levels, and earned like nine trophies, so that was nice.

I also tried the online game, Pox Nora, and I did not take to it.  Thankfully, I earned a trophy during the second of three tutorials, and that was enough for me.

I downloaded the first episode of The Council, and I really had a great time with the game.  If the Season Pass for episodes two through five ever drops under ten, I will definitely be buying it.  There is a charm to that game that I really enjoyed.  It is like a TellTale game, but with some RPG elements, and the historical fiction elements are really fun.  I like hanging out with George Washington.

So, I don’t really have that many more gaming goals.  Keep playing Final Fantasy XIV, keep attempting to play Omega Quintet, and eventually play Call of Duty WWII and Star Wars Battlefront II, probably try those once Battlefront II is an option.