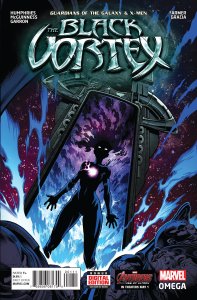 Shadowcat narrates the entire issue, for us.  Kitty has been given a cosmic upgrade but has also disappeared in front of everybody.

The combined heroes are fighting off the Slaughter Lords.

We get our first look at, Cosmic Shadowcat!  I like Humphries’ reveal of what Kitty likes to do on a Saturday night.  She likes to drink tea, under a blanket and watching Katherine Hepburn films.  My favorites are – Philadelphia Story, Adam’s Rib, African Queen, Guess Who’s Coming to Dinner and On Golden Pond.

I’m glad I looked her up, as my mind read it as “Audrey Hepburn” instead of Katherine.

Cosmic Shadowcat has a different outlook on space now, all the things she hated before, seem to have disappeared. 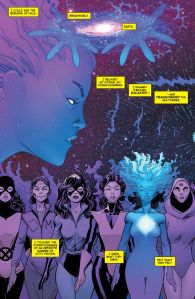 She sees the remains of Hala, Breakworld and Earth.  She reaches out and touches alternate realities of Kitty Prydes.  The two famous ones are Kate Pryde and Shadowcat of Lighting Force.  With Humphries writing “Star Lord and Kitty Pryde” starring the Shadowcat of Age of Apocalypse, I’m surprised that Shadowcat wasn’t on the list.  Especially as the other three are just Kitty Prydes over the eyar, from her Original X-Men Uniform, to her Blue Excalibur Costume to Current one, plus the even more current Cosmic Kitty Pryde.  I would have included Age of Apocalypse and Ultimate Kitty Pryde, but I can see them not wanting to include Ultimate Shadowcat this close to Secret Wars 2015.  If the X-Men Forever Shadowcat had a distinctive look (or was more popular) she could have been included.  Cat from Exiles is dead, so that one wouldn’t work.

The Mutant X slash Black Queen Kitty could have been fun.  This may be the biggest problem, if you choose two, do you not go with a fuller page with additional ones?  With Spider-Verse behind us, I imagine Marvel also wants to avoid that too.  Shadowkitty would also have been a cute choice.

Cosmic Shadowcat becomes one with the entire universe.  Thus, she is far better than Mastermind, when he had this same experience.  I suppose that his was forced on him, and he didn’t have the cosmic power to support it.

Ronan the Accuser, still cosmically powered, has entered the fray.  He is seeking revenge for Hala, which he should just be mad at everybody present.  Cosmic Gamora, Beast and Warren for destroying so much of Hala and Slaughter Lords as they work for J’Son and he gave the order to rip Hala in half.  Which Ronan is clearly mad at them all.

Before more fighting can happen, the astonishing happens. 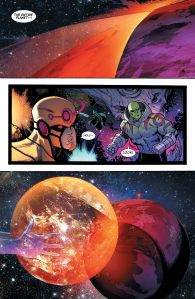 Spartax and its amber coated top layer, are phased apart.  Add Spartax to the list of planets that Kitty Pryde has single handedly saved by herself – the other planet, Earth.  Look at that image on the bottom, how awesome that Kitty just straight up phases on a planetary scale.

We will just have to overlook or plain forget that Kitty just killed an entire species of Brood babies.

So great how the people of Spartax will know, forever, the name “Kitty Pryde.”

Kitty just holds Spartax like it is a basketball.

The Slaughter Lords decide now that is the time to be getting out of there.

I like the possible friendship between Magik and Nova, she could use a friend that isn’t related to the X-Men.

Gara prepares to destroy the Black Vortex, she gives those who were enhanced to undo the procedure.  There is a risk though, the repercussions are unpredictable.

Gamora and Warren are going to keep their power upgrades.  Scott, Bobby, Groot and Beast – all agree to risk the changes and get depowered.  Beast reverts back to his latest blue ape form.  Bobby, instead of having his default ice form being mostly snow, is now ice.  Groot seems to be bulkier. 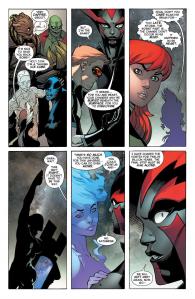 Scott doesn’t feel any differences.  Jean, being the nosy bitch that she is, reads his mind and sees that it his heart that is different.

Kitty offers Gara to join them.  Kitty feels pretty comfortable offering positions in the Guardians of the Galaxy. 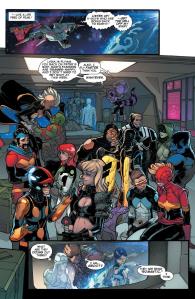 Look!  Someone remembered to include Lockheed!  This is already a great issue!  He looks pretty soft there.  This appears to be a Garron drawn page, I would reckon.

Corsair remains the only member of the Starjammers to be seen.  In that Black Vortex trailer, they make a point of naming the Starjammers as being involved but they were barely on four pages.  They may be tied with Lockheed for involvement.

Nova and Magik are still chatting about.  Is Drax and Storm dancing?  Rocket explains that the X-Men are taking the Hot Rod back to Earth, as he doesn’t want to get anywhere near that planet.  Corsair is talking to the younger version of his former daughter-in-law.  What could Lockheed, Scott and Carol be talking about?  Lockheed seems to be very interested in the conversation.

Pryde and Quill are floating about space, he is attempting to serenade her.  The song he is singing, is “Once Upon a Dream” – which is famously from Disney’s Sleeping Beauty.

Thanks to YouTuber CurlySVT for hosting the video!

Kitty, even after all of her comments and thoughts about hating space and how it isn’t her jam, she has decided to maintain her cosmic powers.  Which seems crazy to me!  Then again, I wouldn’t have wanted to risk what would have happened if she gave it up.  Especially as she was one with the universe.  Kitty does have doubts about not giving it up.

Quill doesn’t care about any of that, as he plain loves her. 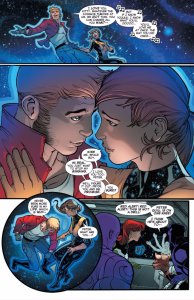 Quill starts explaining how much he loves Pryde.  Pryde loves the dumb lug.

Bobby, who is the worst, shouts that everyone should come to the window and watch.

Quill straight up proposes to Pryde! 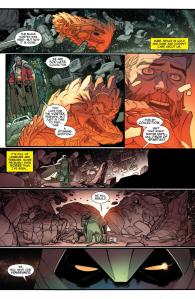 The Collector . . . collects J’Son.  Ronan arrives on some Kree planet, I figure, and swears his vengeance!

Thane and the Ebony Maw, plan on tracking down the Black Vortex.  Which Secret Wars 2015 coming around the way, I doubt we will actually get any of these unresolved threads will be tied up.

Pryde and Quill are crying.  Look at that weird middle panel with all of the headshots, those look so odd.

They see the couple hugging and take that as a ‘yes’!

Look how big Lockheed is there!

Storm asks Rocket if he will be her date for the wedding.  Are we going to get a wedding issue prior to Secret Wars 2015?

StarKat make out as the issue ends.

This was such a fantastic crossover!  Such a nice ending and it seems like it will have major ramifications for the two series.